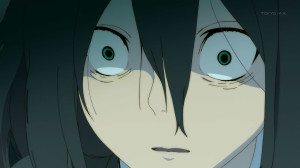 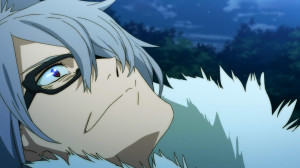 And before you know it the series is over. I’ll say that Yozakura Quartet did a fine job of maintaining its quality through the entire series. The show was just itself the whole way without making any apologies. The last episode very much fit right into that. We got a good little showdown between Akina and Enjin, with again some support coming his way. This episode leaves me feeling incredibly sorry for Akina. I mean damn…he just keeps getting these mental assaults. Enjin doesn’t use those satori powers often, but when he does he uses them to great effect. What Akina has been forced to see both of that other side and what happens to those sent there has to be traumatizing. Even more so knowing that his grandfather and Hime’s grandmother were sent that way.

For a last episode it definitely did its best to spend most of the time on the current events. The second half of the episode dealt mostly with the direct aftermath of the latest struggle. They use the ending theme for a bit of epilogue. Obviously there is a lot that hasn’t been resolved yet, but I respect that they just told the story. Wouldn’t be a point to a remake if they didn’t stick with the material this time and stop at the end of the arc. 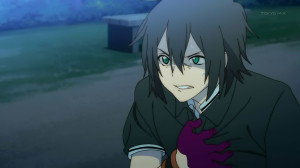 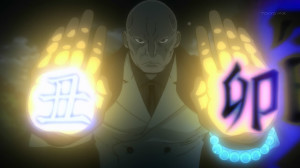 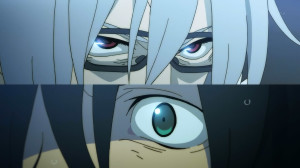 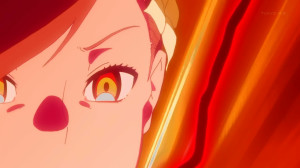 The fight with Akina and Enjin was certainly a flashy affair. Unfortunately it was also on uneven footing since Enjin could abuse his Hiizumi powers as much as he wanted while Akina was getting completely overwhelmed in how much he had to use his powers during that fight. Goes to show the power of science I guess. Enjin was able to make use of research and technology already done and give him a huge advantage because of it. Not going to be easy to deal with now that he’s gotten that inadvertent powerup. Akina did put up a good fight and countered a lot that he had thrown at him. Also pretty cool how his hair goes completely nuts the more he has to abuse his powers. And pretty unsettling how his body was getting corrupted by that power the more he used it.

Once again the Elders make a handy entrance. I’m impressed at their timing really, but they probably have good surveillance on the town. Sadly for this member he had to deal with Enjin after he already was able to make use of their tech. Didn’t let him have a one-sided beatdown like the other guys did. What it did do was buy enough time to get Akina out of there and to safety. Enjin must have realized that Akina was past a very dangerous line and was going to be killed by his own power if he wasn’t helped soon.

That level of damage wasn’t easy to deal with either. Juri herself wasn’t able to deal with it and if Lila hadn’t leant a hand it could have killed Akina and Juri. A good thing that all it takes to deal with that misalignment is human touch. Maybe a bit of a problem with all the half-youkai and youkai around Akina, but there are enough pure humans around to help him out there. In the end Lila played her part in causing some trouble, but also helped resolve things at the end of the day. 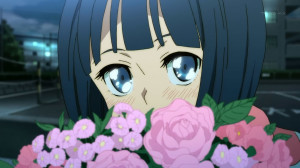 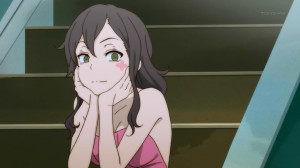 With the action taken care of the rest of the episode was about winding down. Not surprising that Lila is staying in town. Her whole focus has been supporting and getting the attention of her sister. So the best place for her to be is right there. Not like as a magician she can’t find an audience wherever she goes. Can assist in the clinic and probably even put on shows on the side. A much easier person to deal with when she isn’t bordering on insane behavior.

The resolution with Touka and Kyousuke was short, but to the point. It probably doesn’t matter what they were arguing about. People argue, siblings argue, that’s just how things go. Thanks to Lila again that was quickly resolved though. A nice bit of magic and the bouquet helped cheer Touka enough to allow herself to forgive Kyousuke for whatever happened. Great timing though on his part to show up to help Touka when she tried to stop that flying bed on her own. Took the…blows in her place so no one was really hurt there. 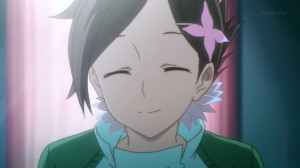 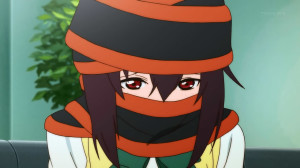 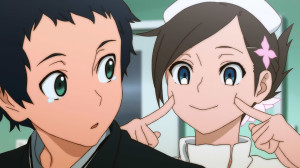 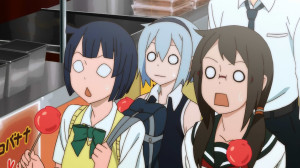 The scene with Hime and Akina was certainly cute. Juri helped get Akina cheered up and he did the same for Hime. I feel for Hime since while she does have that power she can’t actually help deal with Akina’s misalignment. A handshake can’t physically deal with that side of things. But emotionally she is a strong support and certainly that goes both ways. No matter how simple Hime doesn’t want to be, in the end she’s a simple person. A handshake from the guy she likes will take care of any worry XD.

Also want to say…wow Juri and Lila’s mother is easygoing. I mean your daughter is not actually dead and there’s not much to be said there? Though they were on a time crunch so I suppose that bit of comedy played in the shows favor. Maybe there just wasn’t much of a good family situation going on there.

As a last episode it did a good job resolving the current arc and leaving everything open going forward. Only so much you can resolve in 13 episodes while sticking to the source material. I’d rather leaving it open like this to more OVAs and more sequels. At least there are options if the popularity is good enough to warrant more from this series. 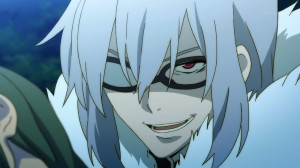 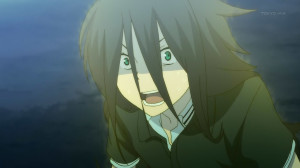 As a whole this was a pretty even series. It held a standard throughout and I’m pretty happy with that. First impressions was that the art style might be a bit questionable, but I could see where they were going with it and it worked. If you are going to have the kind of action we got in this series one way is to do the animation in a way that allows for flexibility. The series showed that in various respects having characters that really felt more real just based on movement. It wasn’t just standing and talking, but subtle movements that went along with that. Overall I say visually the series was a plus.

Yozakura Quartet really is a series that requires acceptance of that universe. Certainly things like child mayors and pretty young counselors might be a stretch, but it works within the universe. Plus on the mayor side of it we can see that town being a rather large exception and for understandable reasoning. The story for the series was pretty nice, we had a couple arcs and some chance (though limited) to delve into the cast. It’s a town on the verge of annihilation and Enjin is at the core of the trouble. I liked how Enjin did get owned on a few occasions. Some powers just line up well and he’s not a god villain. He’s the type to plot and make use of what he has. A dangerous guy and a good villain for the series as a whole. 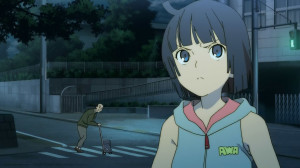 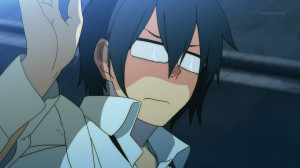 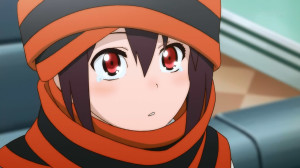 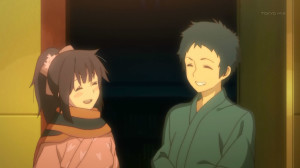 It is interesting how the series actually interacts with its OVAs. Since the first OVA came out before this series the show actually just skips right over the material specifically covered there. But it doesn’t ignore it either. For better or worse it accepts or encourages people to actually go and see that OVA rather than rehashing the same material in a limited episode count. And considering the OVA could bring pretty nice visuals to the table that makes sense. No point doing a version that won’t quite look as awesome when it’s already there. That kind of thing could bother some people, but I think it worked fine.

Overall it was a pretty nice cast. Hime is a cute character and when she’s all dere around Akina it’s fun to watch. They really enjoy using her scarf to help bring attention to her emotional state. Akina really stood out as the series went along. He’s got a lot on his shoulders and can see how bad things are. Has the strength of will that it doesn’t seem unreasonable that he’s running the Counseling Office and trying to improve things in his own way. Ao was of course an adorable character and I feel for her having to deal with this situation concerning her brother. Kyousuke got some nice background and you can see where his seriousness is coming from. Kotoha has one heck of a hax power. Behind that outlook you can get a feeling why she does her best to live in the moment. The cast overall was pretty good. 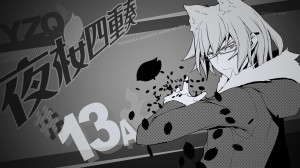 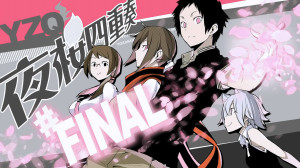 I can’t quite say it’s farewell for this series since I’m pretty sure another OVA has come out recently and if they can keep bringing those then maybe another season is possible down the road. It was a good run and I’ll say that Yozakura Quartet didn’t disappoint me. It stayed level throughout and didn’t hold itself back. It’d just throw in random fanservice, but just have it be part of the scene and not a major focus. It had a nice last episode and hopefully we see more from this group in the near future.
Score: B+