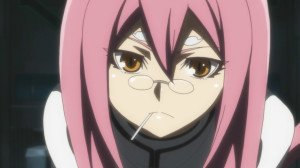 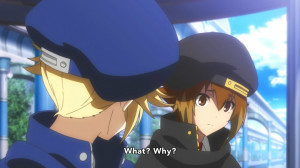 Another episode comes and goes, and I’m left wondering exactly how I feel about this series still. See, at this point I’m hard pressed to call BlazBlue Alter Memory a failure of a series, because for all its mistakes and problems, it gets at least half of the equation right. The character moments, and character development that happens in this series, is quite beautiful to behold. Its like the anime staff have injected their own voice into the characters, and whenever they get a chance to, that’s where the magic happens.

Unfortunately, the action is where this series continues to fall flat on. At times its there, its quickly glossed over and forgotten, and the times when it isn’t there, it feels like it should be. 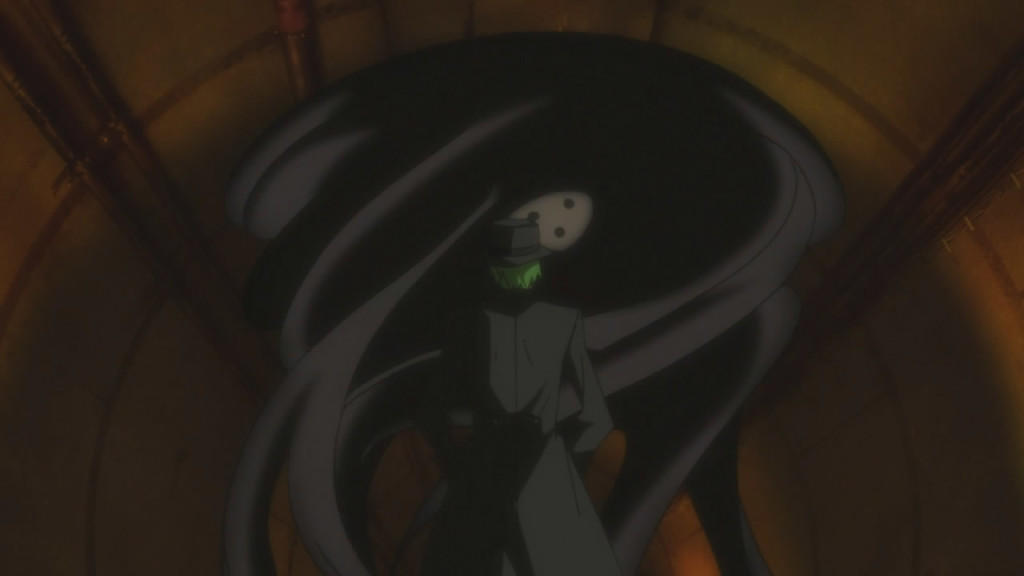 This episode serves as the introduction of Arakune, and a very short one at that. Arakune is a character that is best described as completely off his rocker. He’s a being that’s been driven insane because of his obsession with the boundary. The boundary gets dropped here a few times, but there’s really no friggin explanation of WHAT the boundary is, and its a very powerful and fundamental concept.

Its kind of shocking how complex and important to the very physics of BlazBlue’s universe the Boundary is, and yet even the games haven’t been the best explaining at what it is. I recently, during my rather long break between writing about this series, had a chance to start going through the PS Vita version of the latest BlazBlue (Continuum Shift Extend II). This game actually features abridged “True paths” for both Calamity Trigger and Continuum Shift (The first two games), and these new summary story paths help connect the story of the series in a nice, condensed and easy to understand way.

In fact, the latest game actually fixes a lot of issues from the earlier games, and makes the series a lot more reasonable and easy to understand. Its actually kind of interesting to see how much Alter Memory actually takes from this version of the series, and yet how spectacularly at fails at getting a lot of the story right.

And before you start thinking I’m digressing, there is a point to this, the fact is that the Boundary is one of those concepts that you can peice together from this game. If you’re actually interested in connecting all the dots for BlazBlue’s complex story, then the PS Vita Version of BlazBlue Continuum Shift II Extend is the version to play (possibly after watching this series if you’re an anime only watcher and are still watching).

Of course, the Boundary isn’t just that, its also where Ragna’s Azure Grimoire draws its power, as the Azure itself is what powers the boundary, and is located inside it. Head hurting yet? I’m sure it is. Like I said, this is exceedingly complex sci-fi mumbo jumbo, and something that even players of the original game kind of miss or gloss over.

The fact that the anime doesn’t even try to explain the boundary isn’t surprising, as its one of the most difficult things to actually tackle. You’d probably need some seriously intense writing and what not to explain it all. And let me say, that I’ve only revealed a few tidbits about the Boundary, as there’s more related to the series that has to deal with the boundary.

I’ll hold out for now, in case the series does plan to address some of the finer details of the boundary at a later point, but I’m assuming it won’t. If it doesn’t, I’ll kind of explain or add some extra tidbits when I feel its appropriate.

That said, Now that we have a basic understanding of the Boundary, lets talk about Arakune. Arakune is someone who got obsessed with the power of the boundary, and as a result, he’s what he is now. That’s about all the anime has revealed so far, and I’m sure you can guess there’s more. For now, we have Hazama/Terumi using Arakune as a delaying tactic against Ragna, who seems to be moving too quickly and might mess up Terumi’s big plan.

What is Terumi’s big plan? Well that should be the crux of what this series ends on, I’m guessing. 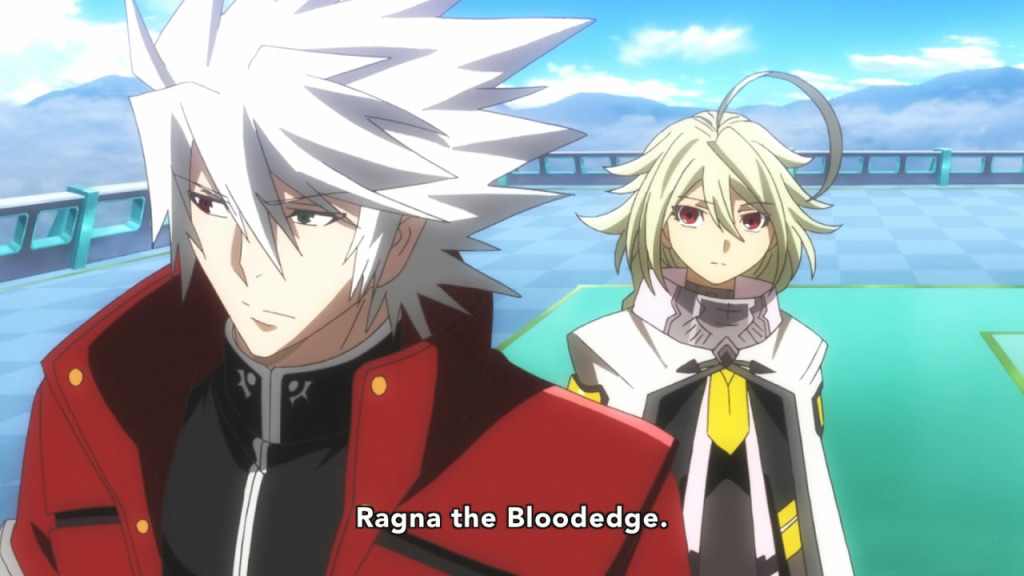 Either way, while Arakune is introduced in this episode, he becomes what both Shishigami Bang and Iron Tager became in the last few episodes, a plot device. The bulk of this episode is actually about Ragna and his interactions with Nu/Lambda.

I confess, I haven’t gotten to Lambda’s storyline in BlazBlue Continuum Shift Extend II, so I have no idea if the scene that plays out throughout this episode is actually in the games. I’m going to guess that its not though. It develops Ranga, and the feeling you get from is slightly different from the character you’ll play in the games. That said, this interpretation isn’t too far off from the mark, and I’d say it actually makes a decent amount of sense.

Ragna seems to keep running into girls with the same face, i.e those of the girl he used to know as a kid, Saya. Its obvious that this whole idea will play a big role, but seeing Ragna act kindly to both Lambda and that male tartar that came out of Arakune was a pretty great character beat there. 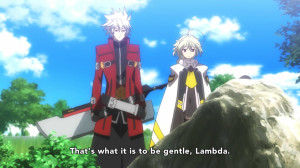 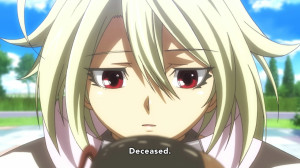 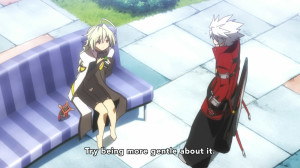 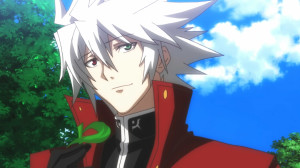 As I’ve said before, the series seems to excel at these, and the development for both Ragna and Lambda is actually great. The moment they share together, and how Ragna teaches her about the value of life and remembering those that pass on, was a pretty touching. In a way it makes sense if you get the fact that Lambda has Saya’s face, and Ragna’s relationship to Saya. 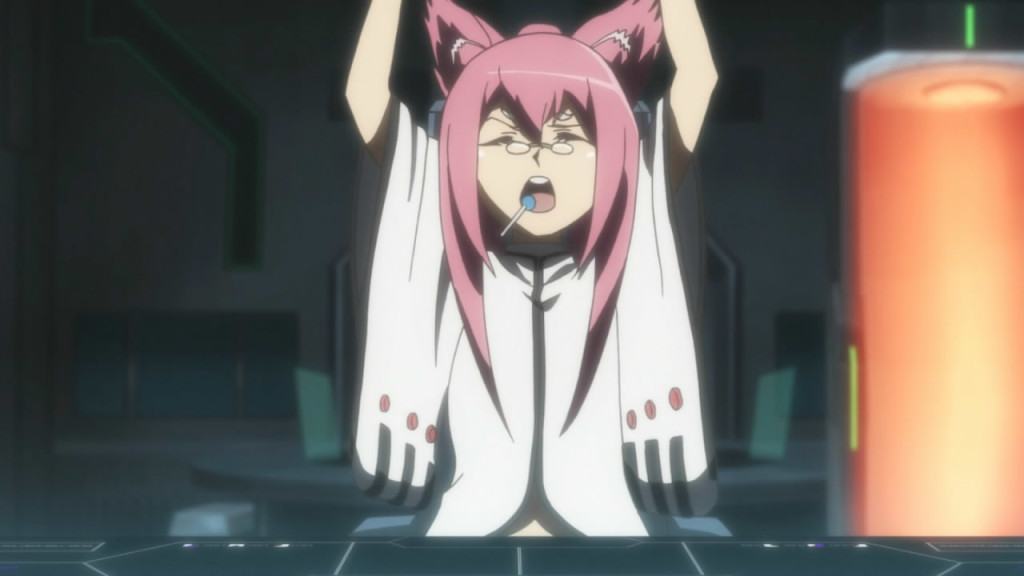 That said, I’ll say that Kokone accidentally sending Lambda off, and then shrugging it off and asking Tager for help was pretty typical of her. I’ll be honest, I’m sure there are fans of Kokone, but I’ve never found the character to be particularly likable. She’s playable in the upcoming Chrono Phantasm game, so I might change my opinion once I play as her and experience her storyline, but based on what I’ve seen her in both the games and the anime, she’s a pretty selfish manipulative scientist.

Tager, as usual sweeps in, and takes Lambda away, as Kokone clues Ragna into some important info. 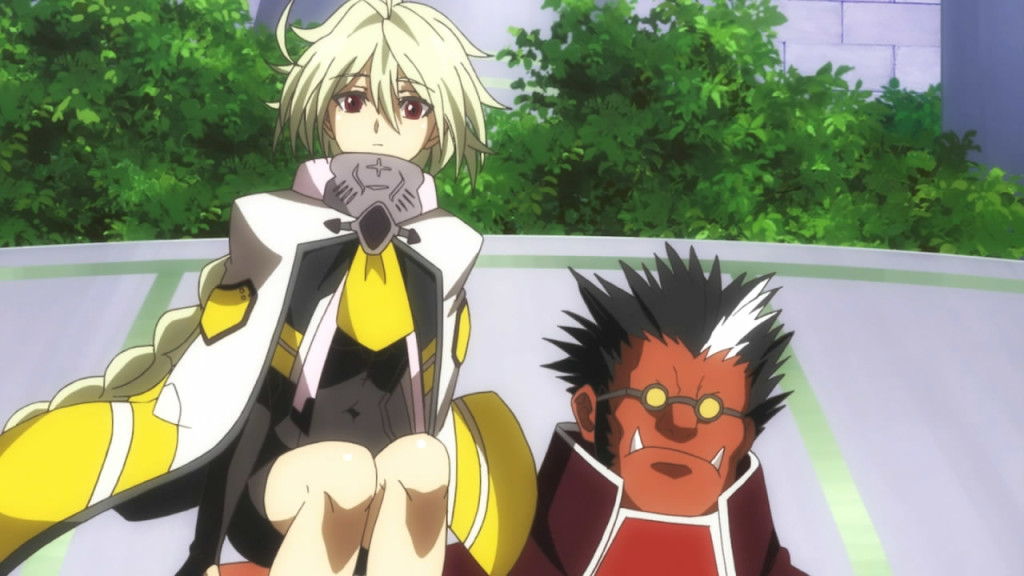 B.) Terumi plans to “smelt” Noel in the nearest Cauldron, one of the Cauldrons that Ragna came to destroy, and has been destroying for a while (along side the prime fields in them).

After this meeting, Tager runs off again…

Now here’s where we could’ve used a decent battle, you know, between Ragna and Tager? That’s twice that the series has flat out avoided action because… it can? Or doesn’t have the budget to actually animate a fight sequence? Either way, its kind of shocking how little fighting has happened in this series as of yet.

We do get Ragna coming to a decision as a result of his meeting with lambda though, and deciding on his own plan of action. 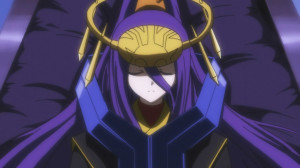 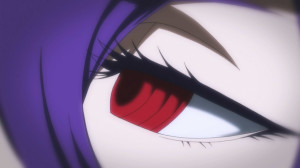 The episode ends with Hazama and Phantom witnessing the awakening of a certain purple haired character. Honestly, I’m kind of really surprised that this happened as early as it did, and I will say that I personally haven’t seen this character actually appear for much time outside near the end of Continuum Shift II. Whether Continuum Shift II extend actually features said character is something I can’t ascertain.

I just hope that there are no spoilers in this series for Chrono Phantasm, as that would likely get even me fairly upset with this series. That said, I won’t say I’m not intrigued.

No Preview this time, since this episode is being blogged alongside episode 09, I’m just going to write them back to back. I will say that as of writing this episode’s post, I have not seen episode 9, and will go on to watch that right now. At the time of reading this though, the next episode’s post should be published and online as well.