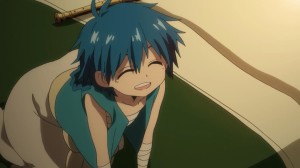 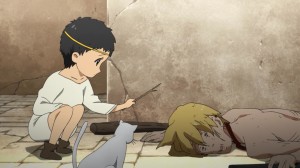 So this time we get to move over to Alibaba’s side of the story. Honestly not a bad shift since it certainly brought some decent action. Was a nice change of pace and certainly appears that things actually were going even worse for Alibaba than they originally did for Aladdin. Of course the whole timeline is tough to piece together and maybe this is all happening at around the same time.

Goes to show that with or without his friends Alibaba’s life is suffering. It really makes me wonder how this guy managed to survive in the city we saw him at the start of the series. Maybe finally going out in the world has made him incredibly helpless? Either way he’s a really lucky guy that the people he runs into actually get pretty attached to him. Those three guys really saved his life there. Certainly is easier to prove your combat abilities when you aren’t dying from starvation. 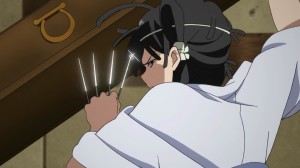 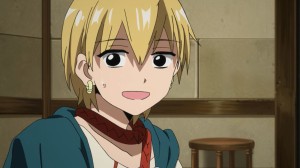 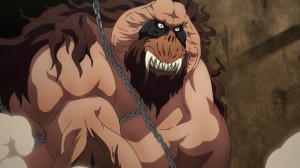 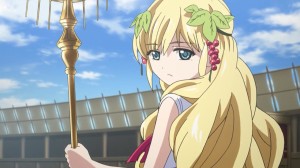 In some ways it was a less smooth episode than the last one. Seeing Aladdin develop his abilities and learn about magic was pretty solid. This was more about Alibaba being a bit comical and then getting some fights in. The next episode though is looking pretty promising with him taking on what looks to be….that monster from Star Wars episode 5. Regardless it should be a good showdown. Alibaba getting a chance to prove himself and make enough money to afford his medical bills XD.

It was interesting to be fair to get an idea about what is wrong with him though. Not exactly subtle about the inference that somehow Cassim’s magoi has gotten mixed up with Alibaba’s magoi. While a bit strange it’s pretty clearly lined up to give him a serious power-up once he can control his magoi. Honestly a few jokes you could make here, but certainly shows some potential that Alibaba has for growth. Though surprising that Cassim has that much more magoi than Alibaba does. Suppose it might relate to Cassim donating his life while Alibaba has to use his life to…well keep on living. 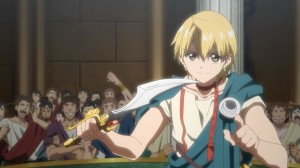 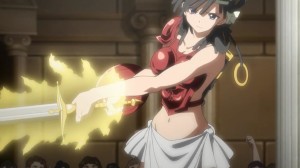 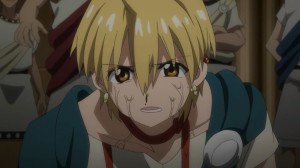 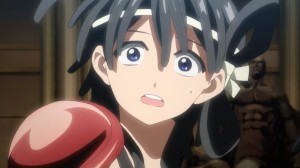 Though definitely the best character of the episode is Toto. Just an interesting combination of badass and cute. A really cute voice, but clearly a character that is proud of her abilities and is more than able to handle herself. Alibaba may be a bit beyond her in swordsmanship, but she’s not a pushover. That magoi control she has really did some damage to Alibaba and is pretty damn powerful. Directly clashing against her sword in that state has the potential to destroy your weapon and do serious harm to your body. Though apparently parrying it just right will weaken that impact.

And yeah how Alibaba won that fight….well I suppose we could actually see him injure her XD. I suppose it works though. Plus I suppose for once someone making a point of the uselessness of that kind of armor is nice. And yeah, now creates someone who really has a grudge against him.

At least Alibaba has some interested viewers for his apparent death match with the monster. Which is probably good since I’m sure we’ll need some commentary for whatever portion of the fight involving Alibaba getting owned. Much as I’d like to see the guy handle himself perfectly, I just have a feeling he’s going to have a hard time here. Especially if he sticks with the idea that he needs to focus on using his swordsman ship and not relying on Amon. 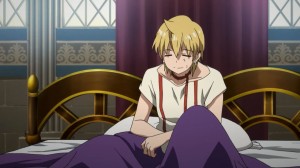 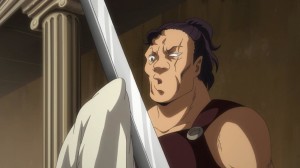 All in all not a bad episode. A bit weaker than the last one, but is setting up for a second episode so that’s fine. Plus I’m surprised that Alibaba found the people he was looking for that quickly. That and getting the revelation that Alibaba’s life is actually in jeopardy. Probably a good idea to master controlling his magoi before his body blows up. Looking forward to next week, though will admit the finals are going to slow me down a bit.
Score: A-