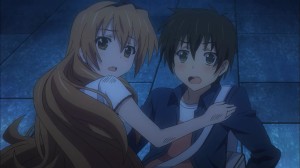 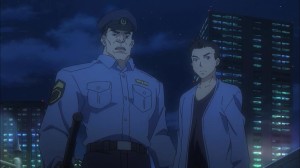 Despite the fact that a lot happened in this episode I’ll still say that it was a much easier ride than last week. The roller coaster is building up right now for the next crazy turn I’m sure. Did get a nice continuation and get to see a very intense couple in action between Banri and Kouko.

I have to say nice job breaking the tension by interrupting that confession with the police XD. I’m not sure what’s more amazing that the guy kept up with a girl on a bike or managed to do so while at the same time altering the police. Either way she clearly said she was borrowing it so I’m not sure how he could accuse her of theft…All kidding aside great running skills from that guy. 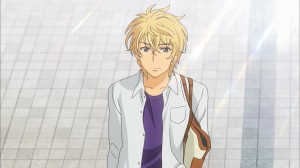 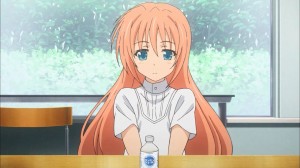 On a lighter note glad my personal question about who the blonde guy from the preview was answered. I was wondering for a while there if a new character was being introduced. But no…apparently Mitsuo just went ahead and dyed his hair. And apparently he and Banri picked up a running away disorder. Seems like both these guys have a habit of running away from uncomfortable situations. Mitsuo and facing that bungled confession and Banri unable to face Linda considering his past.

I suppose a positive is that Oka didn’t really consider that a real confession. Being at a party and I wouldn’t be surprised if the argument between him and Kouko fueled her feelings on it. Yet with him avoiding her and running away it certainly would make it an awkward situation. From her words it hardly sounded like she was seriously uninterested, but rather the timing was absolutely horrible on Mitsuo’s part. Heck could just seem like something random he was doing because he was drunk not a confession you’d take seriously. Will have to wait and see and hope Mitsuo doesn’t do anything too reckless. Well aside from planning to shave himself bald and ending up a blonde…and which between him and Kouko is supposed to be crazy? 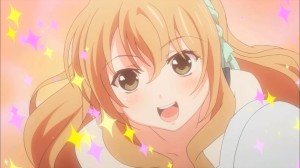 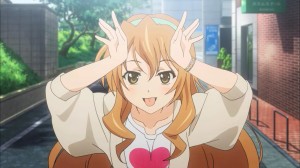 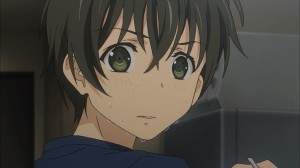 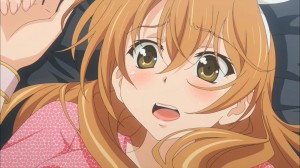 Anyways hard to talk about the episode without mentioning the new couple of Banri and Kouko. My god those two were so sweet it was almost overwhelming. I mean you could insert whatever “they are so sweet” pun and it probably would have been appropriate. It’s kind of funny that while you’d assume Banri would just be enduring some of Kouko’s intensity he was actually going along with it most of the time. Either laughing off some of the unbelievable stuff she might say or actually getting swept up with her. Pretty entertaining really watching these two.

Certainly both characters have a lot of growing to do. Kouko has to watch out in not making her whole life be just about the person she’s involved with. Otherwise Banri really will be her next “target” like her parents insinuated. Of course clear that Banri is still plenty emotionally fragile himself as that breakdown near the end with Linda showed. I’m curious to see how this relationship starts to develop and how the two of them grow as individuals. A few lies here and there aren’t the worst thing, but clearly hasn’t wanted to admit to Kouko that Linda has a connection with the old Banri. That’s bound to bite them both later.

I will say the whole “porn and condom in the box” scene was pretty entertaining. Banri’s stress was pretty hilarious and then things just spiraled out of control. I’m not sure what he could have told her that wouldn’t have spiked her curiosity, but clearly vegetables wasn’t the right option. After a brief freakout both handled themselves pretty well though. It’s not like Kouko was a violent tsundere and on some level understood. Of course then things went in a silly direction with the talk about Paris. Well nothing wrong with having plans I just hope she doesn’t focus too much on her scenarios and lets them control her. 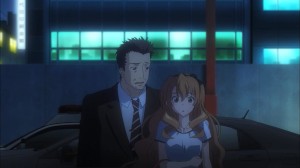 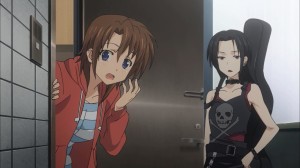 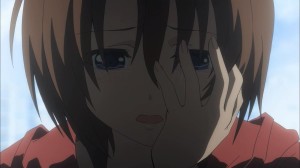 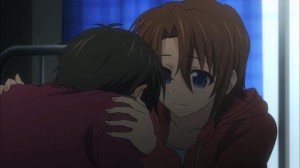 I do think that encounter at the end with Linda and Banri was a pretty key part of the episode. Props to that Nana person for actually doing something. Banri just running away from her wasn’t going to get him anywhere. I get of course that he was frankly afraid, but he had to face her eventually. Had to be hard on Linda and like her worst fears coming to life. Everything falling apart and that distance she’d managed to create with the new Banri was blown to pieces. It does make things interesting that we still don’t know how she was going to respond to Banri, but I still don’t think it matters too much since new Banri is a different guy more or less. At least they are mostly getting back to where they were before. Linda a caring figure and Banri the nice guy that she sometimes has to look after. Of course no doubt she’s going to develop some romantic feelings and I wonder what her reaction will be to finding out that Banri and Kouko are dating? Maybe not much since she kind of assumed they were in the first place.

I did get some laughs at the banter between Mitsuo and Kouko. It’s not like I can blame one or the other since they do throw jabs at each other now and then. Mitsuo treating the situation like exorcising a demon and Kouko slamming Mitsuo’s failed confession as much as she could.

Another good laugh came between Kouko and her father. Well I suppose a knock on the head is the least she could take after getting herself taken into a police station like that. I’m sure the father would have been fine with her just being friends with Banri since it would have been an expansion of her circle of friends. I can understand the worry that she’ll end up doing harm the way things are. Yet it really is up to Kouko and Banri to figure out what they are going to do. I’m glad at least that Kouko’s reasoning (if completely honest) makes some sense. I didn’t think about it, but she could have been uneasy about how much more social Oka is than her. That already she’d managed to do something she couldn’t in getting Mitsuo’s attention and maybe she’d even take Banri away. Hard to say if it’s still not partially Kouko fooling herself, but at least it makes some logical sense. 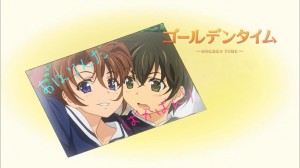 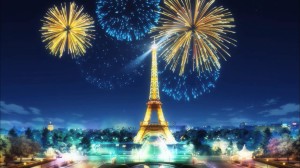 Curious to see how things unfold from here. Banri and Linda seem to be finding a fresh start and hopefully that doesn’t trigger any jealousy from Kouko. Then you have the situation with Mitsuo and I wonder how things will go for him. A lot of episodes left in this series so really anything could happen and I wouldn’t be that surprised.
Score: A