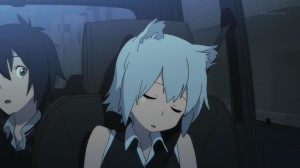 This episode definitely stands as one of the best ones in the series so far. Maybe not the absolute best since Ao was unconscious for pretty much the whole thing XD. Just about everyone else got a moment to shine which was great. Even Akina got his most action of the series even if he technically can’t jump into the middle of things without risking serious injury. It was a pretty complete team effort really during this crisis even though it doesn’t appear to be over quite yet.

It really was a great episode for Hime and Kyousuke. The rest are part of the Counseling Office, but these two are the ones running the place. It was a great laugh when Kyousuke had to pause at the question if Hime was a great enough Mayor to die for. While she has a lot of great qualities, Hime definitely has her weak points as well. Makes things pretty hard on Kyousuke to keep her in line. Even during a crisis it’s nice that the series knows how to have a laugh. 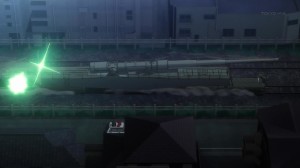 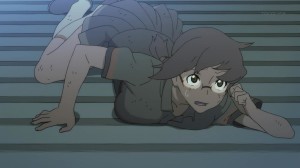 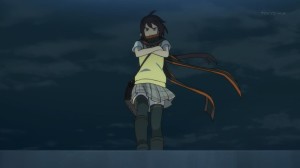 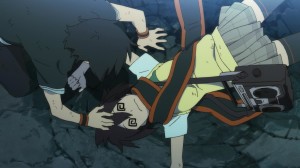 The action really was pretty good. Things just starting off with a bang when we got to see Kotoha’s plan to get rid of the barrier. I mean creating a giant train with a cannon on top, now that’s all kinds of badass XD! Goes to show how powerful that ability is when she really cuts loose. Of course alone it probably wouldn’t have gotten the job done so luckily she did get some support from Yae and this time it seems like she had approval. Regardless it was a pretty wild effort from Kotoha and it was what allowed everyone to pull out their best effort.

Things did get pretty dangerous for a while there though. With the other mayor’s assistant being half-youkai he really could lay into Kyousuke who couldn’t pull out his best effort early on. Akina really saved the day there. Of course it’s clear from this episode that using that tuning ability has serious effects on Akina’s body and he can’t overuse it. Not that it’s an ability he wants to use often, but it has to be frustrating to be restrained from really making the most use of that power. The real tough point of hte episode was when just about everyone was out of commission and Akina had to hold the line alone. He’s a good guy with a strong power, but it doesn’t mean much if he’s getting beaten to a pulp. Just that one shot almost KO’d him.

Hime certainly came at the right time. Even if she wasn’t at 100% it was a whole lot better than having things continue the way they were. Good laughs though with Hime falling without grace and Akina stumbling after her. After that point the action was just a lot of fun to watch. Hime knocking around that assistant, then Kyousuke waking up to join the fight. Goes to show how crazy powerful he really is. Good thing he held back a good amount on that punch against Akina before, really would have knocked his head off. He and Hime really are the powerhouses of the town just when it comes to physical ability. Kyousuke sending the first one flying was pretty satisfying. 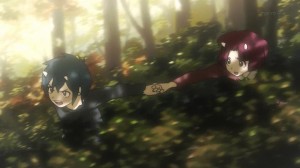 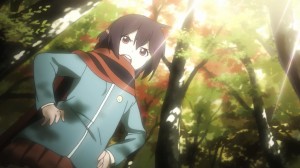 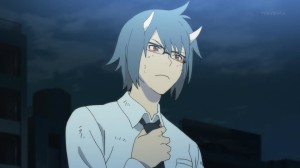 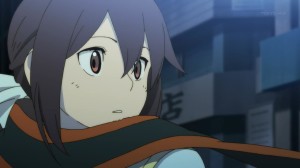 A good bit of characterization for Kyouske came during that flashback. Certainly he and Tohka must have been through some bad experiences before arriving in that town. Likely discriminated against and pushed into a corner because of their insane strength. Of course Kyousuke didn’t know how else to take care of his sister but dragging her around behind him. Didn’t hold back on the blood in a sense like that, dragging her around so fast she was getting cut up by everything they were running through. Goes to show why he does respect Hime and support her as best he can. She was someone who gave him a place to be and let him be someone to be protected rather than trying to protect when he wasn’t sure really how best to do that.

What is pretty serious is how that old guy could actually strike those lizards. Seems pretty likely the guy from before is involved in this whole mess. Regardless the ability to use that kind of power is pretty frightening. Can just power up any number of creatures into serious threats. Lizards and goldfish turned from simple little animals into full out monsters. Can only imagine what he could do to bigger and more powerful creatures. Though we’ve already seen the power of being struck in people like Kotoha. Incredible power granted to people who really can’t handle it right out of the gate.

The episode was just fun for how everything built upon what happened before. The action continuing to ramp up bit by bit. The store owner and his wife getting into the action a bit. Nice how the old man in the end sacrificed his store to help resolve the situation since Hime was really going to let herself get beaten to a pulp in order to defend it. That just leading to Hime being able to access the real Dragon Lance. Figures that she could have gained that a lot sooner if she hadn’t done the memory thing XD. After she pulled that Lance out though badassery was all that awaited. Her techniques were powerful just by themselves, but with that lance she could just obliterate everything in her path. 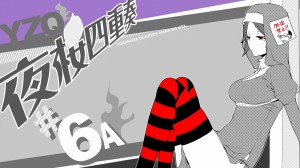 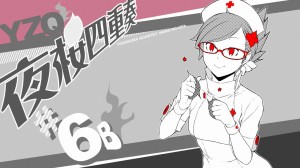 In the end probably the best episode of the series by far. The action was just top notch and the story just kept building up right until the end of the episode. Even with some laughs we got to learn a bit about some of the characters and enjoy seeing Hime triumphantly return to the fight. The bond between Hime and Akina was also nice to see there. Both doing what they can to help the other out with Hime jumping into the fight while Akina planning on fixing up her scarf later XD. When you can put in scenes like that with an action packed episode I think that’s a pretty good result.
Score: A+