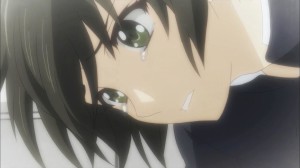 Well after a lighter episode we are right back onto the roller-coaster with this series. I mean damn this episode had so many dramatic moments I’m not really sure which one I should start talking about first. I expected we’d get some background on old Banri and maybe play around with the “yes/no” situation, but holy crap they just stepped on the pedal and went full tilt.

Sometimes you just don’t know how things are going to unfold. Have to say the old Banri was a bit of a…crybaby. He really toughened up after being a ghost for a year XD. I mean sure I thought maybe his shirt not having his name on it was just a joke. Like they ordered an extra shirt just for a joke. I didn’t think it was as extreme as intentionally leaving his name off all of them. Not too surprising that it was just a typo and they went ahead to get new shirts. Still I had to agree with Linda, you wonder if someone that fragile could survive after graduating. 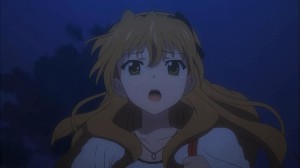 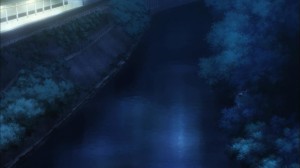 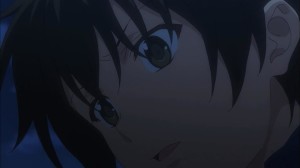 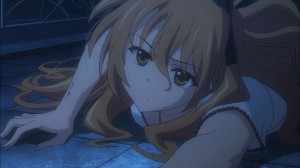 Still, I can’t go far without talking about the ending. I mean Kouko going full tilt after Banri on a bike, smacking into him, and then actually confessing! I mean damn, that’s a pretty crazy way to end the episode. At the same time I’m not extremely shocked. For Kouko this seemed like a logical turn of events. Not that she’s emotionally over Mitsuo, but she felt the pressure to do something or else lose the only other person in her life. If her only options are to go out with Banri or be pretty well alone (aside from the weak affiliations in the club) she’ll take the first option.

Now I’m not really sure if that was at all calculated by Kouko or just an instinct. Just find it hard to believe she’d suddenly get over Mitsuo in a night and come to a realization she’s in love with Banri. Maybe it’s closer to her convincing herself she’s in love with him after being afraid she was going to lose him. Which she honestly was very close to doing with Banri being on the verge of suicide….or attempting to re-boot his amnesia.

What I am curious about is how this will unfold. I mean for all his blow up earlier Banri certainly still likes Kouko. In that emotional frenzy I could definitely see him willing to go out with her. The problem being is how long can this relationship last and can either of them develop efficiently while staying in there? I wouldn’t be surprised if they broke up at some point and then got back together later in the series. 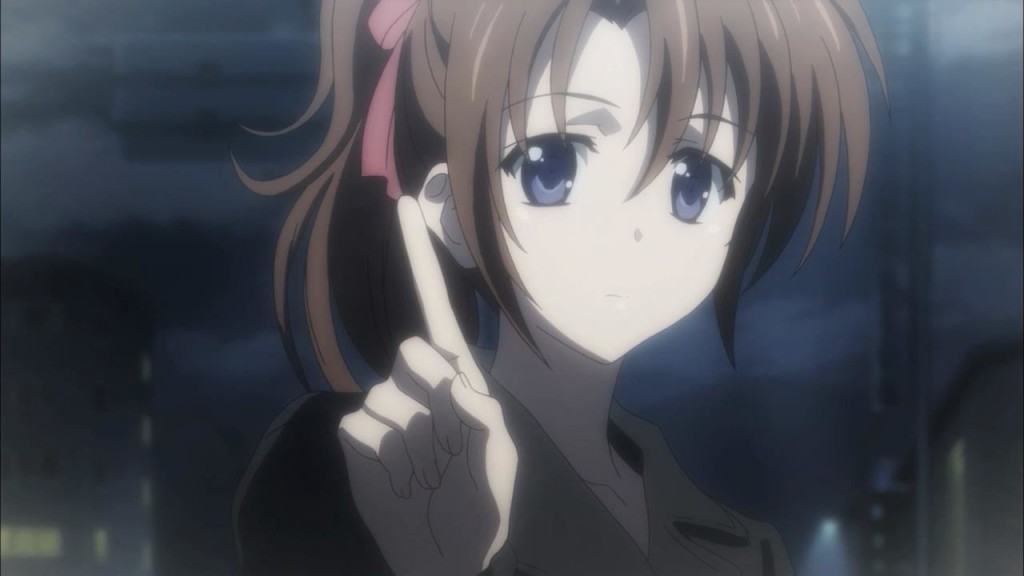 You just never know what’s around the corner

Despite all that I thought Banri finally losing it with everyone was intense but almost refreshing. I’ve seen series where a character could put up with the situation Banri was in for the whole series. Heck you see that kind of thing in harem shows all the time. The girls put up with not having their affections returned and being stuck in this friend zone. Banri on the other hand just blew up on her. He just couldn’t handle being in that position for any longer. Maybe he could have if it hadn’t become clear to him that Kouko still has feelings for Mitsuo and she hasn’t gotten over them yet. He just couldn’t take it. I don’t really blame him aside from the fact that he should’ve known this was going to happen. He played along despite that and eventually he couldn’t take it. While I don’t think Kouko had been fair to Banri I can also understand that she needed someone to support her emotionally and he was there.

But no, Banri wasn’t done there. It moved right on to his confrontation with Linda which was something as well. I’m kind of glad it happened in the end though. The situation was getting uncomfortable and after losing it with Kouko I could really see Banri just being unable to take things anymore. He finally broke the standoff and revealed he knew that she knew about old Banri. Again I don’t blame Linda for how she handled it all. She was afraid of what would happen and didn’t want to light the fuse. I’m sure she wanted to get closer to Banri as well since memories or not it is physically Banri. I’m surprised she wasn’t the one who ran off. She had no idea he knew and was hit completely offguard. In the end though she was at least honest. She was afraid and feeling terribly guilty because her actions had him on that bridge waiting for her.

The fact that she felt guilty for having Banri waiting for her there was the thing that really surprised me. I was kind of buying into the idea that she directly caused the injury. From her words I find it hard to believe she was directly responsible. Him being there waiting for her is what she felt guilty over not causing any harm. I suppose they could twist it later, but for now I’m going full in on believing in Linda. It made sense that she was late really. She had this confession dropped on her and needed time. She was probably on the fence in a big way. Did she feel romantic love for Banri or was it just a sibling/friend thing? No matter which way she decided it probably left her uncertain and going around in circles. In the end we still don’t know how she was going to respond to him. 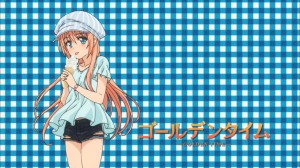 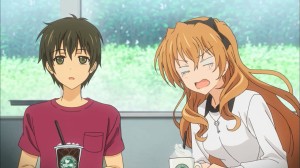 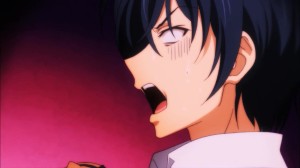 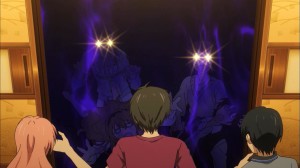 There was also the little thing about Mitsuo confessing to Chinami that people might have forgotten. In the end I’m glad she didn’t respond favorably at that point. It was becoming a contest between him and Kyouko. He was comparing her to Chinami and she was calling out his feelings as being fake. A relationship starting out of that would be sad. Makes me wonder though if on some level Kouko is right. How real are his feelings for Chinami? Is he really in love with this girl or trying to get at Kouko?

Regardless I wonder why she responded the way she did. Did Chinami just think Mitsuo was drunk and thus not serious? Is she involved with someone? Does she just not like him or feel that she’d rather look at beautiful people and not actually date them? Hard to say. Chinami is a friendly girl and quite sociable. Definitely suited for the film club with her recording that whole scene and really getting to know everyone. I’m curious what makes this girl tick and how things will develop. Kind of nice that things aren’t going to be so easy. Mitsuo can’t just decide to love someone and have things go simply.

As to how everything turned out after that confession….Banri is pure evil. He just couldn’t take either of them anymore and just sacrificed them to the tea club. A fate worse than death….Though I suppose on the positive side they now share something in common with 2D-kun and Banri. 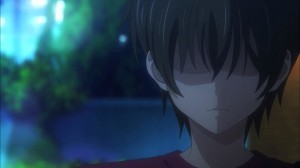 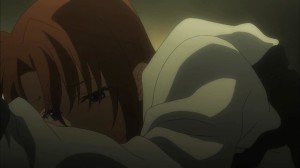 I can’t wait to see how things unfold next week. It was pretty shocking that Banri had reached such an emotional state that he considered jumping from a bridge to try and destroy his memory again. Kind of shows a frightening side to Banri who already lost his memories once. Be scary if he starts looking at amnesia like a reboot. Thankfully Kouko saved him from himself. I have no doubt with how he still feels for her that he’ll accept that confession. I’m just curious how things will unfold and especially how things might go when they see Mitsuo again. Can Banri take a relationship with Kouko? We’ll find out.
Score: A+