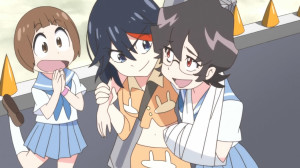 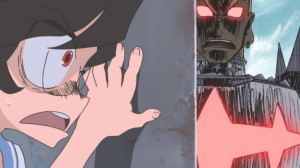 What is this? Is Kill la Kill trying to touch on some sort of satire of high school life? Can this show, with its out there nature and high octane action even handle something even remotely serious?

Well, one thing I will say about the latest episode, is that I definitely expected the series to go where it went. A lot of the rest of this series is probably going to be episodes like this, random high school life related topics inspected through the rather twisted and out there lens of the Kill la kill world. In some ways, this episode gets closest to some idea of actually saying something, before slipping back into the high octane crazy the series is known for. XD 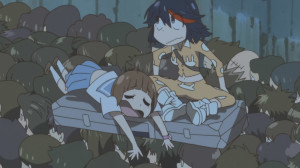 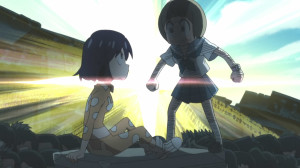 This whole episode is obviously looking at the whole deal of getting school on time, and takes a rather extreme look at exaggerating it in typical Kill la kill fashion. The major premise is that there’s a particular day in Honou Academy where you can’t be late. The whole thing takes on a quasi-event like form, where the Student council actually goes out of its way to prevent students from getting to school on time. The purpose? Anyone who’s late gets automatically expelled.

Its an interesting concept, but looking to much into the logistics of why its there is just an exercise in brain hurt. In many ways the series cuts off any lick of real deeper meaning and sense for an episode that aims to be fun. And while it is fun on a surface level, I can’t help but feel a bit underwhelmed. 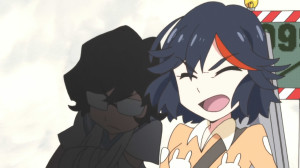 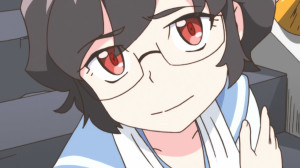 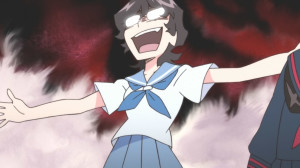 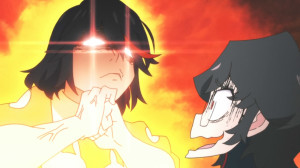 The thing that’s disappointing is that the whole episode is very straightforward. Kill la KIll has, to this point, put some kind of weird twist on every trope or cliche that it tackles, but this episode really didn’t do that. It was intentionally obvious that Oogure Maiko was a villain from the get go.

The darn girl had RED EYES! But more than that nearly every action of hers was obviously devious and suspicious, to the point where I wonder what the whole point of this plot point was? Yes she gains Ryuuko trust (only Ryuuko and Mako are dumb enough to really fall for her act anyway) and then back-stabs her at the last moment, but where’s the twist? Where’s the self-awareness at how stupid this whole thing is? 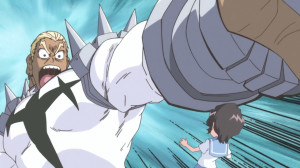 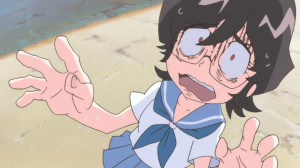 It was kind of fitting that Oogure exited the series this very episode, she was a pretty weak and disposable character.

I think ultimately what makes this episode feel a bit lower in quality is the lack of cleverness to the central idea of episode. That said, it wasn’t all bad either. 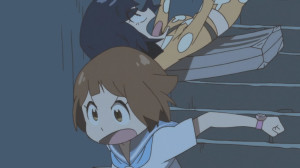 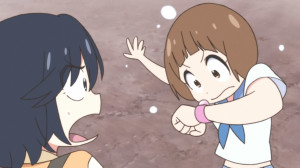 Certain characters really got to shine, one of which was Mako. Mako generally says rather out there stuff, but this episode took the cake, as Mako was there beside Ryuuko for literally the entire episode. The episode’s best moments came in when Mako opened her mouth and uttered her weird logic.

This was used to perfection in the conversation between Gamagoori Ira and her. Even the badass Gamagoori Ira, with his extremely opposing personality and loud voice couldn’t keep up with Mako’s barrage of arguments. This scene, is the kind of thing that Kill la kill does so well, the out there, totally flabbergasted self-aware gaar comedy that only it can do XD 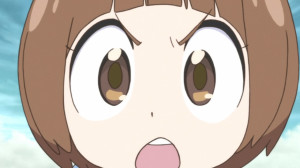 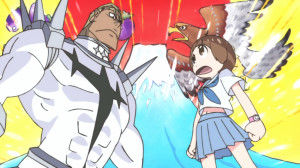 Where else would you have an argument between two High school students, about whether another can or can’t wear her pajamas, and why pajamas should be worn rather than sleeping in the nude XD 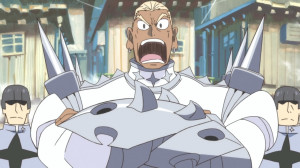 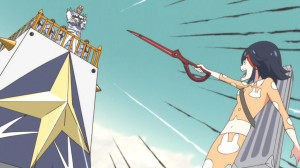 I must say I like Gamgoori. The guy has a sense of ideals, he’s strong, yet he shockingly can admit when he’s wrong, as was evident in the conversation with Mako (although I question who was really wrong at that point). I’m looking forward to when Ryuuko inevitably faces off against him, and what the result of that confrontation will be.

The other character that I continue to like on a weekly basis is definitely Senketsu. Senketsu was thrown into the wringer this week, as he mostly spent the entire episode away from Ryuuko. It was interesting to see him react to the basic stuff like being washed in the laundry, and then kind of enjoying being ironed. The way they chose to open the episode with Senketsu begging for help was pretty hilarious as well. Again, another of example when Kill la kill is dishing out its own original brand of humor. 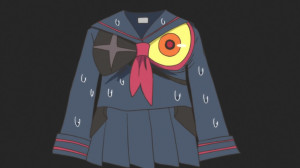 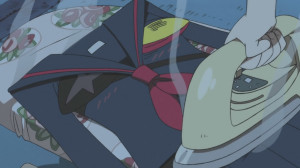 More interestingly was how the anime eluded to the idea that Ryuuko and Senketsu are in some form of a relationship. I particularly noted when Senketsu not only refused to be used by Oogure, but also the fact that Ryuuko said: “You didn’t cheat on me.” 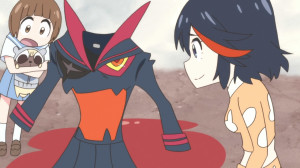 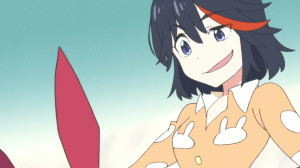 Cheating eh? That’s a very unique way at looking at it, but I guess its not surprising that there’s sexual undertones to the whole thing. What about this series isn’t tapping intto that fountain of crass, sex and violence well anyway? 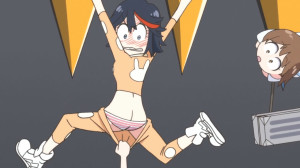 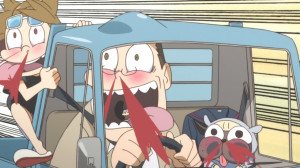 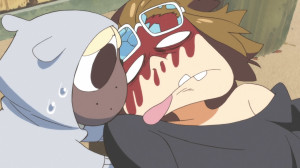 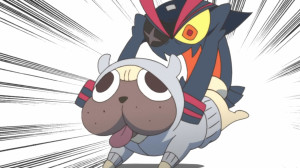 The fanservice/comedy bits were pretty miss for me this week, as the whole Oguire grabbing Ryuuko’s pajamas each time got old after the second time she did it. It was kind of hilarious to see Guts be the one who eventually delivered Senketsu, but mostly it was pretty stupid and not stupid in a particularly funny way.

While I do think that this week’s episode wasn’t as strong as the last three, I also kind of expected it to go along those lines. There was simply no way an episode was going to top what happened last week, which was basically Satsuki vs Ryuuko. 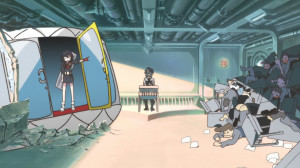 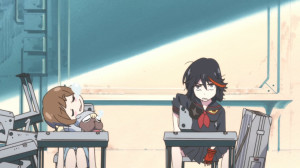 I don’t think this series is going to keep declining in quality. If anything, I think this week was just one of those hit or miss episodes, and we’ll probably get varying quality of Kill la kill goodness until the main plot kicks in again. 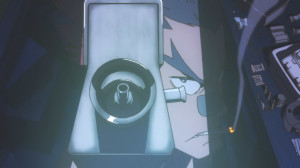 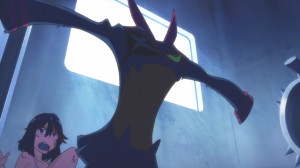 Hrm… another episode that deals with the with the idea of taking off clothes? Why am I not surprised? XD