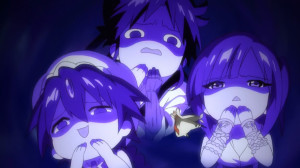 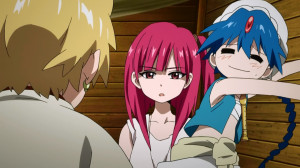 Man with friends like these who needs enemies? I suppose a bit of teasing between friends isn’t a big deal, but damn they just slaughtered Alibaba there. Nothing worse than hearing criticisms of you when you think people don’t know you are nearby. Of course personally I just feel that’s pretty mean for friends to do even as a joke. At least when it comes to a guy like Alibaba. Though it was overall a pretty funny scene I did find myself feeling a bit bad for him there. While it was just pretending they forgot about him and were just goofing around that was perfectly good though. Definitely some comical moments with how Alibaba’s grand plans to show off and get appreciated were dashed.

Of course you could tell that Morgiana wasn’t really following with the whole joke plan. She was just being brutally honest XD. Those other two sadists however…Oh well I suppose it was a good counter maneuver that what happened with Alibaba and Morgiana actually happened. 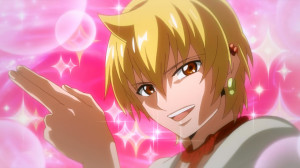 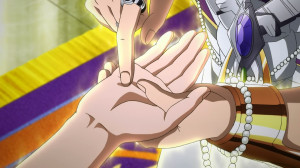 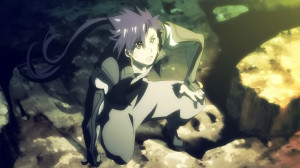 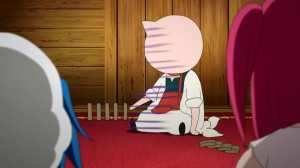 Such is the life of Alibaba though. I did manage to get a good laugh from how he couldn’t really fully explain the plan for his journey. Truly nothing more sad than seeing him just knocking over those blocks in a bid to get some attention XD. Poor guy really is the one who suffers the most for the comedy in this series. At least he managed to get a slight moment of glory near the end when he took care of that South Seas creature. Didn’t get to see him actually fight, but at least he got a chance to show off before the end of the episode. Though I wonder if the group didn’t feel the need to praise him a bit with how depressed he was earlier in the episode XD.

Alibaba’s plan seems pretty solid. It’s not like he’s incompetent and by now should at least be able to do a djinn equip like Kougyoku or Sinbad. Though if he does need help to get his magoi control in order then going on this journey is pretty crucial. If all goes well then he can pick up what he needs to know. Not to mention being a gladiator even temporarily is a good chance for him to improve his combat skills. Just a constant stream of battles and a chance to grow stronger. By the time everyone meets up again he should be at the level he needs to in order to move forward with the others. 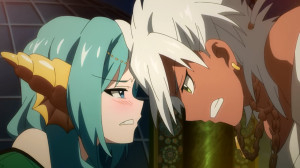 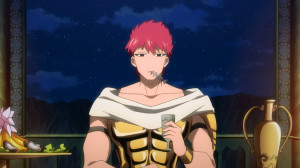 As usual Sinbad is just overly suspicious. I’m sure even with the others moving on their own journeys he still intends to make them his pieces on the chessboard. It’s fine if they move out on their own long as he can keep them under his control. Though I’m sure he’s a bit uneasy letting them out of sight, but that’s just how it goes. If he pushes too hard for them to stick around he’ll lose them. Again not that I think Sinbad is a bad guy, just really focused on protecting his kingdom.

Did enjoy seeing the generals argue about which of their disciples are better and how Masrur even said that Morgiana could kick the other two general’s asses XD. Good fun having that guy just coolly mock them while Yamraiha and Sharrkan are bickering as normal. Of course have to agree that Morgiana has probably made the most pure progress with Aladdin behind. Alibaba is getting somewhere, but with his magoi in that current state he hasn’t advanced as much as was possible. 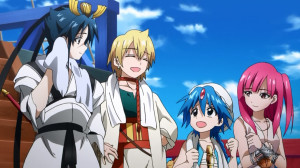 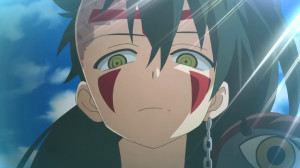 So looks like the group will get one more big conflict before they all go their separate ways. These pirates should be an interesting threat though hard to say how legitimately dangerous they are going to be. Will be a good reminder as to where Alibaba and company currently stand and how far they still have to go in order to match up against the real powers of the world. A good episode with a few laughs along the way. Though kind of liked the last one a bit more.
Score: A-