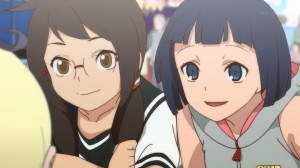 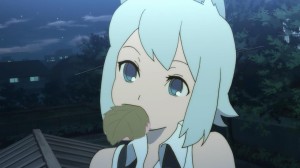 It really isn’t often that series get a second chance. Reboots may be pretty common in movies these days, but for anime it’s another story. So I’m quite looking forward to seeing what this new version of Yozakura Quartet can give us. It has been a long time since I saw the first series so things should feel pretty fresh regardless. All I saw lately was that OVA released some time ago. The first episode was a solid return for the series really. The cast pretty much all got their chance to shine it was a quick introduction as to what their various abilities are. The future episodes can get more into details later, the key was just getting a feel for what the series is going to be like

Visually I thought the series was alright. The character designs feel a bit average, but with the action maybe that will allow them to be a bit more fluid with less budget. No one looked horrible, just that they didn’t stand out as much as some of the bigger budget anime. This series should be pretty fun action wise if only thanks to Kotoha. That ability of hers to turn words into objects should lead to some fun action and some comical moments. I mean not many series will have a character catching a giant gold fish with a giant paper scoop…That’s something else right there. 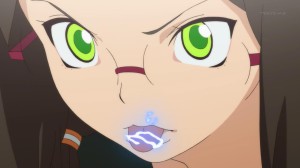 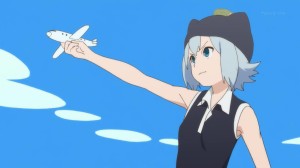 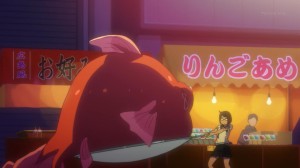 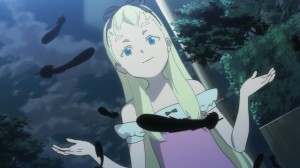 Honestly I like the vibe the series has. This town where humans, youkai, gods, and half-breeds are all living and interacting with should be a lot of fun to observe. The cast itself is pretty well balanced from the humans to the youkai. Everyone has their own talents and abilities and we’re really only getting a feel for them. We got a better understanding of Ao and Kotoha in the first episode since their backgrounds and abilities were explained pretty head on. You can tell Ao is a great support character with her mind reading abilities and ability to locate over a wide range. Akina’s abilities weren’t really touched on along with Hime. Regardless the series will give a better overview in the episodes ahead.

This episode really was to introduce the town and in some ways the enemies. Between that lightning storm and that girl Lilly who disguised herself to observe the main characters up close there is bound to be a lot of trouble. Could see that her magic was able to interfere with Kotoha’s shortcut and maybe it could do a lot more harm than that in a different situation. That really felt like a testing phase to see what everyone was capable of. I’ll also give the episode some credit since I wasn’t sure what to think when her ‘parents’ actually showed up. I thought maybe she was just a kid after all….at least until she transformed into an adult and that whole theory went out the window XD.

I suppose a key thing to pick up as well is that the main cast are acting as the towns Counseling Office. Certainly not too crazy since with their variety of abilities they can resolve a lot of problems the town might have. Not to mention for whatever reason the Mayor of that town is also in their group which gives it legitimacy. If people are willing to have Hime act as Mayor then really the fact that a group that young are acting in an official capacity isn’t all that strange either. Though maybe nothing is really strange when you have a town full of youkai, humans and everything in between. 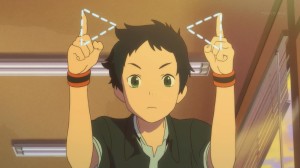 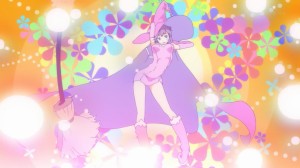 I wouldn’t say a lot happened in this first episode. It was mostly introduction and the great Goldfish chase XD. A pretty fun introduction, but really all it did was set the stage a little. The future episodes should allow us to get to know the cast more and what they can do. That’s about how it is with these sorts of series though since you can’t give a group of characters full biographies right at the start. Well, I suppose you could but it probably wouldn’t be very interesting XD. Will have to see what next week brings and what kind of trouble will have to be dealt with.
Score: B+