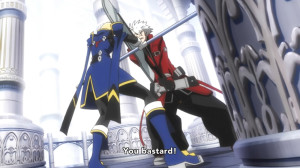 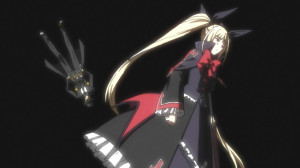 Arc System work’s fighting game series BlazBlue is one of those series tailor made for being adapted into an anime series. Its got a visual novel style story, anime style characters and even famous seiyuu like Tomokazu Sugita (Gintama’s Gintoki) playing the main hero of the games. Expectations for the anime adaption are exceedingly high, and there’s a genuine fear among the fans of the franchise that the anime adaption will be another one of those poor game adaptions.

If the first episode is any indication, the anime is at least staying very faithful to the source material. What worries me though is that its blazing through what was  a decently slow paced story in the original game, and its almost too concerned with filling a imaginary checklist rather than telling a story in the anime medium.

Beyond some moving around of some of the story’s events, BlazBlue Alter Memory actually adapts about half of the true path of the first game’s story mode. Its really confusing as to why so much is crammed in so suddenly, and its almost as if this is a series that is assuming that the audience knows what its getting before it even gets there. 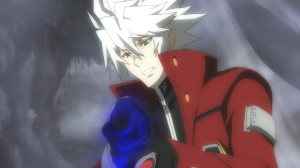 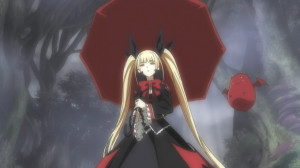 As a fan, I was overjoyed to see all the characters I had grown to love in the games come to life, and have their own, very in character scene in the first episode. As an anime fan and a fan of storytelling in that medium, I couldn’t help but feel that the premier was trying to do too much, too soon. 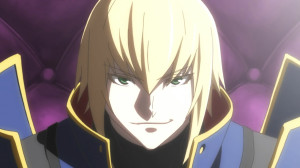 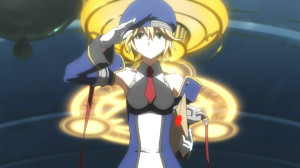 Ragna’s backstory was hinted at, we get the introduction of Rachel, we get a look at Ragna’s master, we get to meet Jin Kisaragi, Noel Vermillion, Tao Kaka and Hazama all in the premiere. That’s a lot of characters, and while its far from the full cast, the whole episode had a feeling of rushedness to it. Its almost like it was ticking of a check list of sorts.

Music and sound effects from the game? Check. Many of the popular characters introduced? Check. Key phrases from said characters uttered? Check. Seiyuu that played the characters in the game reprising their roles? Check. 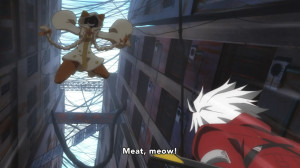 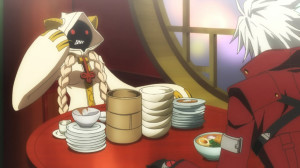 Yes all that stuff that the fans will latch onto and appreciate is there, but the pacing is so horribly off. Ragna himself feels pretty under developed, Every scene he’s in is over too quick, and its almost like the anime is more concerned with showing how cool it is rather than sitting down, taking a breather and telling an interesting story. The meeting with Tao Kaka for example, is super brief and is over before it even really begins to mean something.

I personally wouldn’t have minded if this very meeting had been the focus of half the episode, with the first half maybe setting up the backstory for the series. One of the reasons the story is so endearing in the original games is that it is slow paced, and the dialogue scenes between characters goes on for a while (as is generally the case with most light novels). 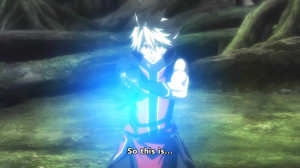 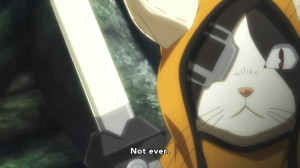 In the premiere, it felt like these character developing conversations were cut to the point where they became more of cliff notes, or summary recaps. I wouldn’t be surprised if someone who hasn’t played the games, sees this premiere and wonders what the hell is going on. There are too many cuts to different characters without much of an explanation. 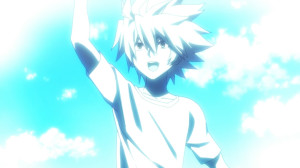 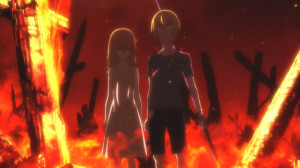 I could see the premiere going for a much better take if it focused on a few characters and developed them instead of going for the quantity over quality approach. Ragna’s past itself could’ve been a good half of the episode, instead of a few minutes. Ragna’s arrival into the city of Kagytsuchi could’ve easily been a nice, quiet premiere. They could’ve started it off with Ragna meeting ONE of the characters, and the tone of the story and characters being setup from there.

If I didn’t know any better, I’d wonder if this series was some sort of OVA series, with a 6 episode length or something of that nature. Either that, or given that Hideki Tachibana is in the director’s chair for this project, maybe we’re going to get a similar approach to his work on the original Higurashi no Naku Koroni. 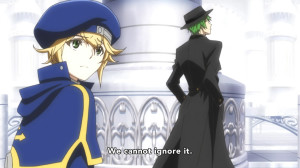 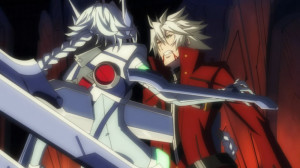 I won’t say the potential isn’t there, since the series decided to open up with the hints about events repeating, and what not. Its a curious choice, and while I loved Tachibana-san’s work on Higurashi, I can’t say I’m not worried. While there’s plenty of “bad ends” and dead routes in the story,  I’m not sure if the scale of events or the rich mythology of this franchise are going to allow for a similar approach in this particular case.

Its really going to be boil down to the next episode, where we’ll likely see how the story chooses to deal with events. The story adaption itself is curious, because the third entry in the BlazBlue series is yet to come out, and the second game ended on one hell of a plot twist and cliffhanger. Does the series go forward and spoil the story for the third game? Or do we get something anime original? I’m not sure. 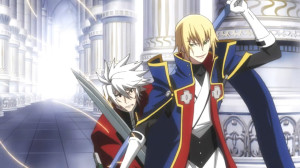 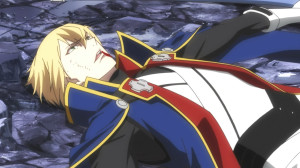 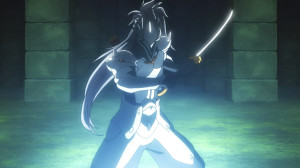 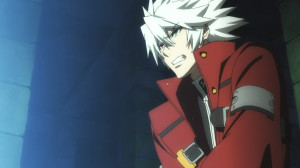 In any case, the episode ends with not only Ragna defeating Jin with relative speed, and with Noel chasing after him, but more so with a meeting between Ragna and Hakumen. This is a pivotal moment in the story of the games, and really, will tell whether all this rushing through the content truly had a point or not. 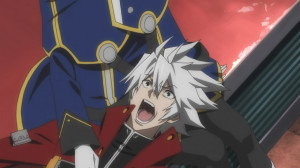 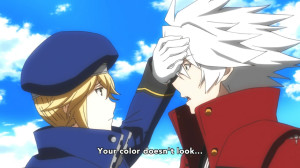 There were some other key scenes, the one of particular interest to myself was the meeting between Ragna and Noel. There’s already hints about these two and their potential relationship. I was pretty happy to see some Ragna x Noel moments being shown in the premiere, just as a pure fan of that particular coupling. Whether that aspect of the story gets more attention or not later, is anyone’s guess.

On the production side of things… I’m kind of dissapointed to be honest. Maybe its because I’m used to the really crisp anime scenes from the original game, but the production values for the show seemed to be on the low side. For one thing, the OP was pretty much recycled animation from the premiere episode itself, and the animation itself wasn’t all that jaw dropping either.

Considering we had about… 3-4 small battles in this very episode, the animation failed to impress. After seeing more impressive offerings from both Studio Trigger and Kyoto Animation this season, its really sad to see the lack of budget afforded to this series. 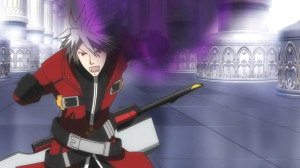 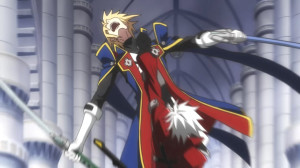 Ragna’s attacks in particular, which have a really cool demonic hand silhouette with them, were reduced to nothing more than simple “black aura” attacks. Added to that the visuals in general had a blurry quality to them. Maybe it was the Funimation stream that I was watching, I certainly hope that’s all it was. That said though, the Studio animating this show really did drop the ball here.

Studio Mausu isn’t exactly a studio of high caliber to be honest, and I’m curious as to why such an action heavy series was given to them, who have mostly dealt with stuff like Yosuga no Sora, or done rather odd work like Arad Senki: Slap Up Party. 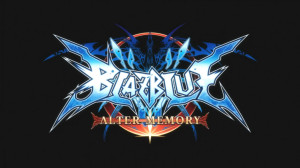 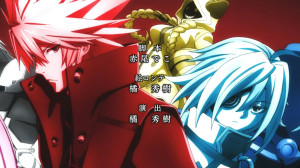 The art direction was pretty impressive, and character designs very well done as well, its too bad the anime can’t really get much credit for it (That’s ARC System Work’s stuff). What it does get credit for, is very nicely adapting how the characters look and feel, which is pretty close to the source material.

All in all, While it wasn’t horrible, and as a fan of the franchise, while I loved seeing my favorite characters and locations being adapted, I was quite dissapointed by the overlack of quality for this show. The pacing, and general approach, alongside lackluster production values give me a serious cause for worry. The one shinning ray of hope is Hideki Tachibana, and we’ll have to see if he can successfully adapt what is a tricky story to adapt.

I’m going to keep watching and blogging this series of course, but I do have to say I wasn’t impressed here. I’m really curious, for those viewers that came into the anime series blind, those who haven’t played the original games, what did you think of this first episode? Let me know in the comments, because I’m really very interested.