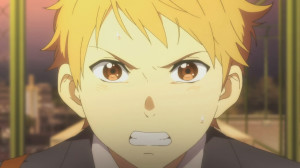 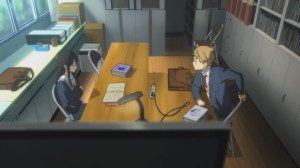 Sometimes not having any preconceived notions or expectations is a good thing. Going into the premier of Kyoto Animation’s latest offering, I had literally no idea that this was a Kyoani show. In fact, my immediate reactions after seeing the show were: “Hrm… Why is this anime going for the Kyo-ani art style?”. Of course, once I did put two and together, my opinions and expectations for the show became a lot harsher and higher respectively.

Personally, this premier did not strike gold for me, and the early description I read about the show didn’t intrigue much either, so going in, not knowning about the studio behind this I had pretty low expectations. Yet, I wasn’t blown away or excited by this first episode. Since this is a Kyoani show, I guess drawing comparisons to two of their more recent series Free! and Hyouka is an easy way to really measure how “good” or “successful” this show is.

Free! and Hyouka both actually grabbed me in the first episode, Hyouka more so because well, its definitely the superior series of the two. I think more so than just a premise, an opening episode has to really sell its characters, and Kyoukai no Kanata does that in spades.

I’d say that Akihito is a very unique main character, much in the same way both Kyon (From Haruhi) and Oreki (Hyouka) were. And… in much the same way as those two leads, he makes a great first impression. I like how Akihito is very likable, and very positive and cheerful (something we see so rarely in male leads these days(. There’s also a very quirky, weird hilarious side to him as well XD. 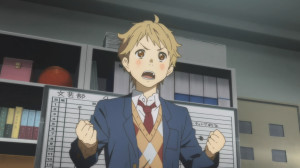 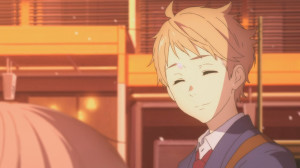 He’s almost like one of those side characters you often find in a Kyoani show in some form or the other. That, combined with the nice twist that he’s immortal and kind of motivated to help people, makes him a very different character from anything I’ve seen lately.

Of course, the originality starts and ends right about there. Nothing else about Kyoukai no Kanata is all too original. The youmu stuff is pretty cookie cutter Youkai stuff that a dozen other shows have done, and done well to death. Akihito being a half youmu is a pretty standard plot point that these kind of shows have. And I definitely haven’t seen one other character that would make me excited. 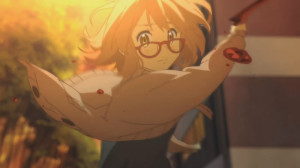 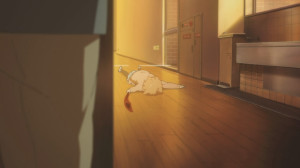 Kuriyama is the pretty classic moe blob girl that Kyoani seems to churn out of their factory at a rather alarming quantity. I’d like to say that her combo of moe blob-ness and “cursed clan” background were enough to make her unique, but it really doesn’t work for me.  And no the megane thing doesn’t earn her any points XD 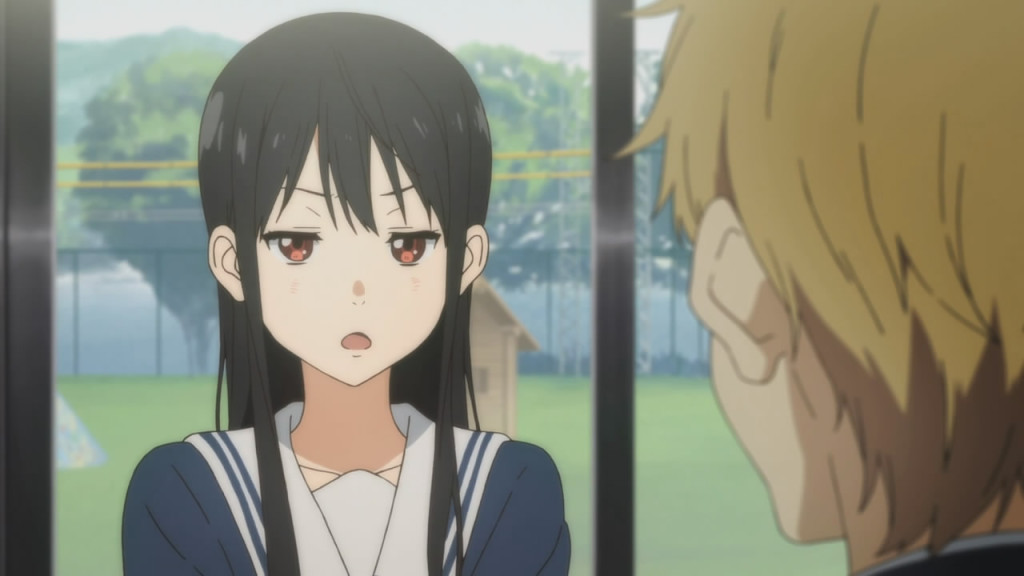 That said, while not exactly something unique or new, Nase Mitsuki does have some potential for being an interesting foil to main man Akihito. I did enjoy their exchanges in both the literary club room and cafeteria, so I won’t say that there isn’t hope. It just kind of worries me that the main female lead for this show is kind of… cookie cutter, combined with a plot that’s pretty cookie cutter as well. 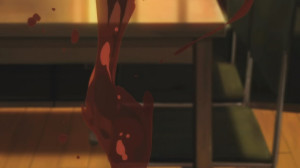 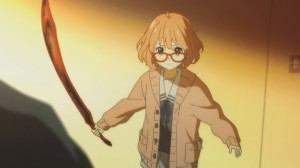 The whole “cursed clan that can manipulate their own blood as a weapon” thing has been done tons of times in anime, and hell, even the western animated Avatar series has done it in recent years.

I will say though, the animation for this show was pretty top notch, as is expected of Kyoto Animation. Even more so, it was pretty nice to see the studio tackling a show with action again, Full Metal Panic being the last franchise where they formally dealt with that. The art direction, shot framing and general look of the show is spectacular overall.

The seiyuu work is of course, pretty nice as well, with none of the regular Kyoani seiyuus or a lot of famous people popping up that I can make out. After having been in the game of watching anime for around 8 years, its pretty nice when you go into a show and don’t recognize any of the cast.

Pacing was pretty well done for the most part, except that I felt the episode cut off just as things were getting somewhere. Its fine and dandy to spend your time introducing and developing said introductions for characters, but an opening episode generally needs to also kind of wrap up the first incident as well. 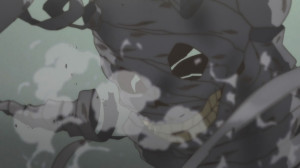 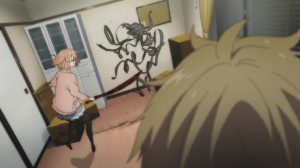 As it stands, we kind of left off with the first major battle between our two leads and a youma kinda hanging. I’d call it a nail biting cliffhanger, but I haven’t hadn’t nearly enough time to be invested in what’s going on just yet.

In the end, I guess it probably sounds like I hate the show, and I honestly I don’t. Its just, going into this show, I thought it would be a B-Level show, and honestly, beyond the sweet animation and interesting main male lead, there really wasn’t much there. That said, if the premier of this series does show one thing, it shows that there are some good things kind of hiding in the corner, and that there’s potential for this series to be great. 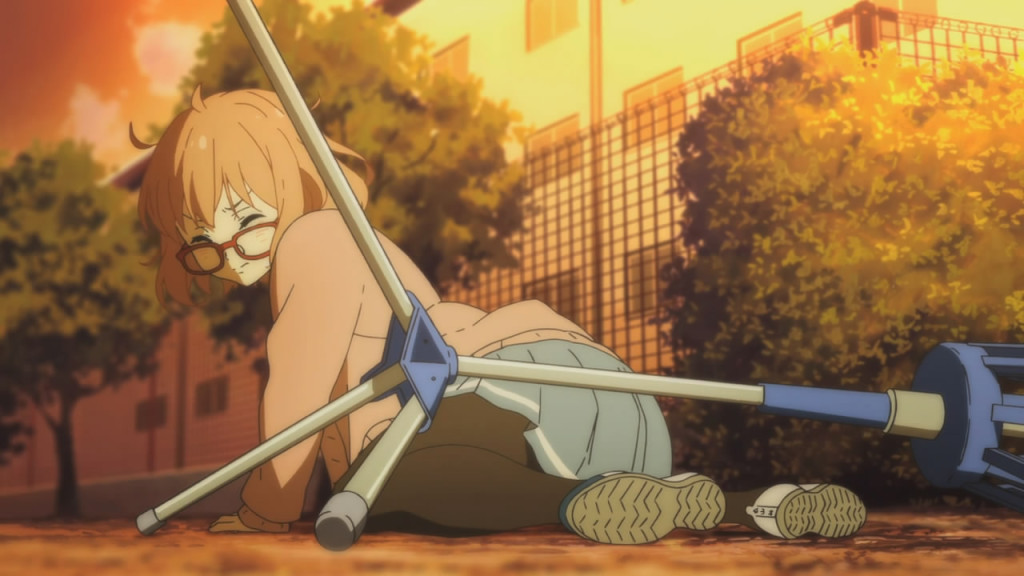 The 3 episode rule definitely applies to most shows, and I think even more so, Kyoukai no Kanata needs it. It didn’t hit it out of the park with episode one, but well, it definitely made a decent first impression. Lets see where this show takes us.

in Kyoukai no Kanata