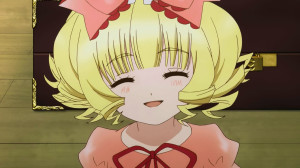 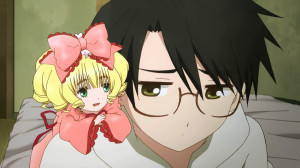 This was one of those times where I could stop and be surprised that the episode was over before I knew it. Certainly not a bad thing and it leaves me all the more eager to see how the story is going to resolve itself next week. This episode took care of a lot of issues hanging over our heads while at the same time leaving a few hints that things in the long run aren’t close to being over. That brief appearance of Kirakishou’s thorns is enough of a warning that the sisters haven’t seen the last of her.

The episode itself just passed on by before I knew it. There was a nice focus on Shinku’s resurrection, Suigintou’s dilemma, Jun’s growth, and a touching farewell. I also thought that flashback gave a lot of needed characterization to Hinaichigo. In the end that girl was pretty much gone by the time this series started so the only other thing to know her by is memories of earlier seasons of Rozen Maiden. This showed her insecurities, but also a gentle kindness that she would share the comfort received by others being there for her. It’s completely understandable that her Rosa Mystica would choose to stay behind and protect Shinku’s body. 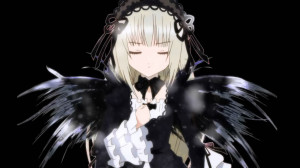 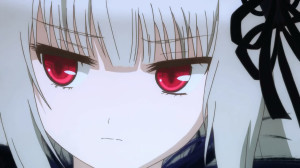 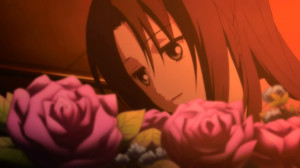 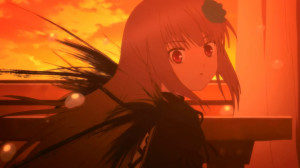 That itself lead to the greater focus on Suigintou in this episode. It would have been easy to get Souseiseki’s Rosa Mystia again since that doll was quite determined to keep her promise no matter how much it would hurt to separate from her twin. In the end though it wasn’t worth doing right now and at the moment Suigintou needed time to think. She’s a pretty sharp charater all things considered and now is realizing it’s not as easy as just taking the Rosa Mystica from her siblings. At that point they would reject her and who knows if her body could withstand that kind of strain. At this point she needs to consider what needs to be done to really win this Alice Game and what her next move needs to be. Fighting is bound to be key in this struggle, but it may be that she needs the others to acknowledge her first and at the very least not treat her like a villain.

A nice flashback came later regarding Suigintou and Megu. Certainly that is a strange relationship between two of the more unsual personalities in the series. Megu makes Suigintou seem completely normal by comparison. That girl really has quite the view on life and death when it comes to herself or even flowers. Certainly it has a strange meaning to consider that people are bringing these half-dead plants to a dying person. But she certainly cares a great deal about Suigintou even if she’s got a strange way of saying things. That strangeness is reaching Suigintou and it’s going to be all the harder to actually use her life force to fight. Maybe Suigintou looking for her own way to win will be important when considering that all out battles aren’t in her favor here.

Regardless she did look plenty cute with Megu and getting her hair styled. That kind of acceptance is something that Suigintou has really lacked in her life and I’m glad she’s getting it even if it is from another strange girl. 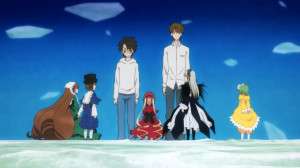 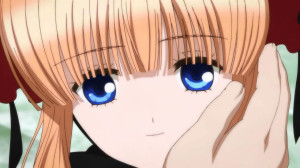 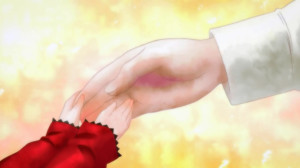 Nice that Shinku made it back in one piece…eventually. Older Jun putting her back together certainly makes more sense. I mean he did make a cuople dolls already so this is probably a lot easier for him. While younger Jun has a lot of talents he may not be able to do something like that all of a sudden. Either way a funny reaction with Shinku owning the both of them XD. It’s kind of sad to think this is the last encounter we are bound to see between Shinku and Older Jun. Things might have started off on an uneasy foot, but by the end there was definitely a sense of loss when they separated. In the end though this Jun has grown up and is finally ready to head out into the world and survive. Younger Jun still has a lot of need of the Rozen Maidens if only to help push him out the door.

That farewell with the dolls was a bit sad. But I liked the little hug between Jun and Souseiseki. It’s a strange relationship since he barely knew this doll despite having put together her body here. Still it’s a nice connection between them and I’m sure both will keep each other in mind. At least Jun can pass on the contract to younger Jun in order to carry things on. Each of the dolls had their own role to play in helping Jun grow in a short amount of time. Certainly he’s come far enough that he’ll survive alright. But it was still nice to see those brief scenes with Jun and Shinku since at the end of the day that is the doll he spent the most time with. It didn’t seem that Shinku cared as much early or perhaps that was her trying not to get too attached when she had the other Jun waiting. In the end though I’m sure they will miss each other at times. 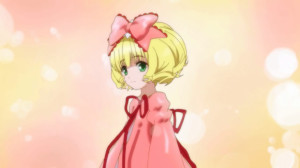 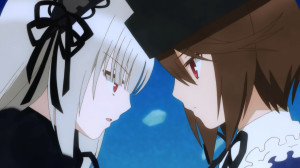 At least the play has returned to normal and everything is looking alright. Now Jun can start moving ahead in his life and hopefully that involves asking Saito out on a date! After fighting for his life and all the battles I sure hope Jun can handle that crappy manager. There are things you can’t do in his world, but right now he can make sure to improve his life in a variety of ways. Life isn’t going to be easy but at least he has good memories to carry along with him and that alone should be enough to make things better. This series still has an episode left, but have to say that it really has made all the dolls and older Jun pretty relatable and understandable.
Score: A