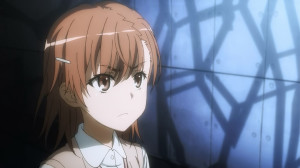 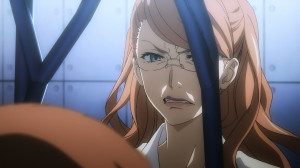 Well nothing like dealing with the villains to get some decent information even though it’s not the most pleasant experience. Therestina is even more annoying to deal with than I remembered. Not that she didn’t have some decent information, but it’s clear that imprisonment hasn’t improved her mentality or attitude at all. Still the person willing to go to such extreme measures and is pretty damn warped.

Props to Mikoto for keeping her cool while dealing with such a frustrating person. Certainly brings the events of the first season into perspective. Was easy to keep up such a just and passionate stance when not really understanding the darkness of the city at all. Could judge the desperate actions of others easier without knowing how bad things were. Harder to make such a firm stance now that Mikoto knows what is really out there and she has seen too much to simply ignore it. 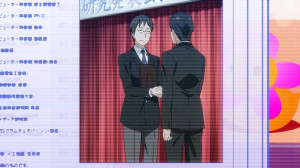 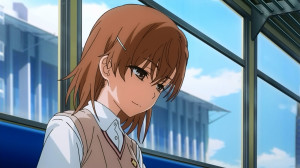 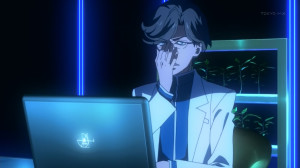 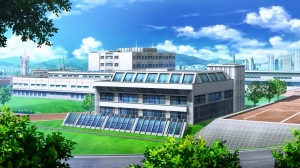 At least though thanks to some timely help Mikoto was able to face that darkness without being broken by it. Can’t pretend it doesn’t exist, but at the same time can at least still keep smiling and sticking with the friends that keep her grounded. Without that support Mikoto would probably be dead right now, having thrown her life away in a desperate attempt to stop those horrible experiments. She did help resolve the situation, but it was a problem that she definitely needed help to take on.

Of course clearly not everyone has that kind of support to keep them grounded. Can see that from Therestina and really those scientists as well. They fell much more into Therestina’s “2 option” category. Either you get corrupted by the darkness yourself or you try to destroy the city to erase it and the darkness. We’ll have to see what those scientists plan on doing but it seems much more liekly to be option 1 there. In the end Mikoto and Therestina just won’t be able to see things in the same way, but at least Mikoto got some decent information out of her.

It seems like we can figure out the goals and reasoning of that group of scientists now. They’d been successful over and over again at this Assembly, but clearly aren’t nearly as famous as the Level 5s. In this city scientific genius has value, but abilities are always going to be ranked higher on the scale of importance. I suppose for geniuses at that level being ignored by the city was probably a good hit to their pride. Not even good enough to be put through the hell of being test subjects. 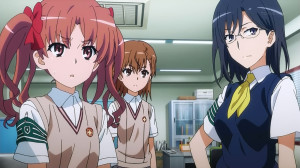 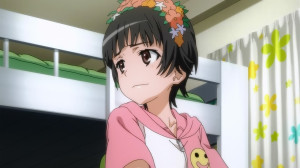 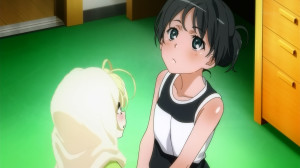 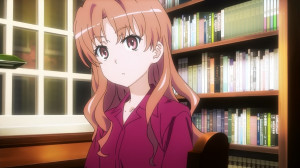 Maybe what Saten said brings some more perspective to it. As a Level 0 there’s a serious feeling of being worthless at times in that city. If geniuses who are at the top of that level feel like they aren’t being accepted then they might do something horrible to spite the Espers and maybe even the city that doesn’t give a damn about them. Of course that’s horribly selfish and stupid when you think about it. As Saten said they could use their skills to better everyone’s lives and instead they are wasting their talents on something like this. Working in the darkness to try and get acceptance, fame, revenge, whatever. It’s just pathetic to think of what they are wasting because they aren’t seen as important as Espers.

I do wonder at times if Shinobu really is a genius. I mean she was pulled into this group because she was caught trying to turn on the people she used to work with. Doesn’t she think people might be suspicious when she tries to take actions on her own? Of course it leaves her and Mikoto in a frustrating kind of hostage situation where htey have no choice but to go along with what a lunatic wants. Amazingly stupid to think he would give them anything useful. Not that they even know if he was telling the truth about the data Shinobu acquired being fake or that he’d give the data over if they cooperated. Not that they had a lot of choice there since Febri’s life was on the line, but it was pretty reckless.

One thing that caught my attention was the talk about Mikoto’s friendships. Probably wouldn’t have the same friends if she wasn’t a Level 5. But that’s the same for anyone really. If you change a key aspect of someone then everything about their life will probably change to some degree. If Saten was a level 3 or something who knows what kind of friendships and life she’d be living right now. Mikoto’s friends don’t like her simply because she’s a Level 5, but that status and ability was a key that opened the door to various encounters. You can get great friends without being a Level 5, but they’d probably be different friends. I don’t think that’s something Mikoto needs to worry about. 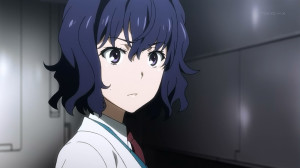 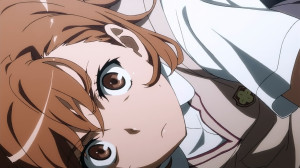 This Haruki guy is just a reflection of the crazy scientists that exist in Academy City. They have no problem using or messing around with the lives of others for their own ambitions. There is no need to let Febri die, but he’ll do it because she’s not needed right now. Though throwing away the “spare” before you actually take action makes me wonder what he’s even thinking about.

Still, at least it’s becoming more clear what’s going on here. Seems like their goal with making an artificial person was so he could create an artificial esper. Someone with incredible powers that can control those machines from a distance, but is completely at their mercy because of that poison situation. Pretty damn twisted. Don’t know anything about this Janie, but has my sympathies. A lab rat being used just because these guys have a beef with espers. 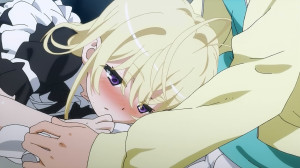 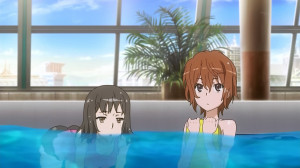 The situation is pretty dire. Mikoto can’t take action now that she let herself get paralyzed, and the real data might be lost here. Even if Shinobu can get them out of this which is questionable it doesn’t seem like they’ll be able to save Febri at this rate. Things are looking pretty bad and I can only wonder how it will turn out. The only real bright spot in the episode was Mikoto thinking about Touma. Well maybe that and the whole ITEM segment. Takitsubo’s swimming really is something else XD. Regardless I think they are doing a good job making this a good arc to end this season of Railgun with.
Score: A