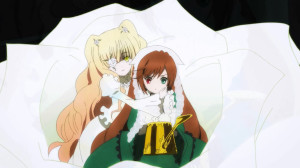 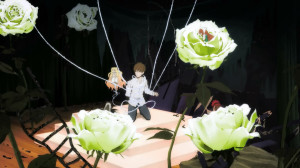 So apparently Jun has become a harem lead. I don’t know how else to say it other than like that. This guy began the series in such a dark place with seemingly little interactions with the world around him and now he has Saito and pretty much all the dolls trying to make a contract with him. It made for a pretty hilarious episode at times. Kind of funny how this big battle could get sidetracked by these dolls getting jealous and all trying to get Jun to make a contract.

On that note it wasn’t really an action packed episode, but more focusing on the characters and continuing the development of older Jun. Kirakishou really had a powerful and almost overwhelming advantage earlier with Suiseiseki acting almost like a bodyguard for her. Rather frustrating since while you can understand Suiseiseki’s position she was making it rather hard to deal with this situation. 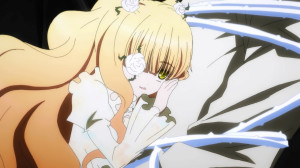 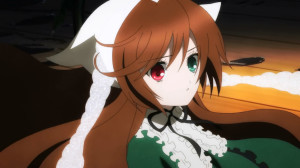 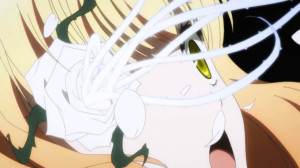 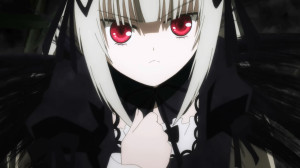 That was quite the plan from Suiseiseki though. I mean actually using Souseiseki’s ring to help reclaim her body from Kirakishou was a good plan. I thought initially that Suiseiseki was like hte others and trying to get Jun to make a contract with her, but instead she had another method. It was almost a perfect plan if she didn’t account for the fact that Suigintou had no intention of returning Souseiseki’s Rosa Mystica.

It is an interesting bit of information that their Father is connected to this. I suppose the fact that he didn’t give Kirakishou a body reflects that he’s not completely supportive of her doing all of this. But it might also be the fact that she doesn’t give a damn about his original intentions but rather is just trying to collect everything. The bodies of her sisters and their mediums because they are connected to them. But we didn’t get much explanation about what is going on and probably won’t for a while thanks to Suiseiseki no longer being in action. 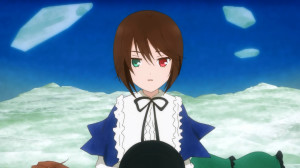 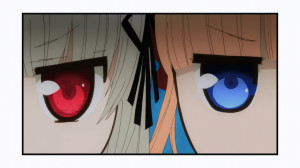 It shows the incredible love that Suiseiseki has for Souseiseki that she did something like that. Of course being twin dolls they could be the only ones to pull something like this off, but that’s an amazing sacrifice. Not that Souseiseki plans on letting it stay like that. Makes you wonder if this can end without Suigintou’s arm being twisted to return the Rosa Mystica. In a sense Suigintou is just playing this game the way it is to be intended. Gather the Rosa Mystica and become Alice. Just chilling and hanging out isn’t the normal method here. But at the same time it feels like the only way they can resolve this whole mess is by cooperating.

The most comical moment may have come from Souseiseki when she talked about Jun making her body XD. I mean the way she put it was great and the reaction from Suigintou and Shinku was just priceless. Just played on the crazy jealousy going on here even though Jun also made Shinku’s temporary body. Though maybe her reaction was completely based on that XD. 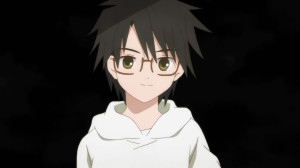 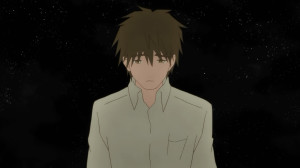 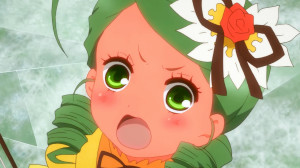 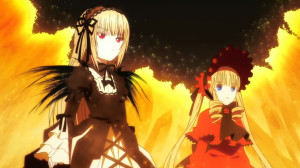 Anyways I like how Jun continues to grow and develop through this series. He’s really trying to take responsibility for his actions here. He made the body Shinku is using, he made Souseiseki’s body that Kirakishou was using. He doesn’t just want to sit around and do nothing while all this is going on. Of course it comically lead to this harem situation with all of them making their pitches. Though in the end Shinku kind of won since she was the one he met first who helped trigger his life getting turned around.

The talk with younger Jun was pretty interesting as well. I mean you see younger Jun with that cockiness, but underneath it he is still a kid who’s been hiding away in his room the whole time. Older Jun did fall into his normal pattern of looking down at the life he’s been living. It’s so easy for him to just see everything in his life as dark and depressing. It had to be hard to hear for the younger Jun who hasn’t yet moved into that wide world. So I’m glad that Jun managed to just pull it together and find the bright points. The important thing is that he finally gets that his world isn’t a dead end. He can always open up his way into the future. The past can’t change, but he can do a lot with his future if he just tries.

There was also that fun part with Kanaria and Jun playing on her “perhaps” line XD. It is hard to take someone seriously who constantly says something like that while talking. In the end though he was pretty impressed with her power and how it helped out. Everyone has their strengths and weaknesses and this time her power was the right one for that situation. Maybe helps explains how she could be the one Rozen Maiden working with younger Jun and staying mostly out of trouble. 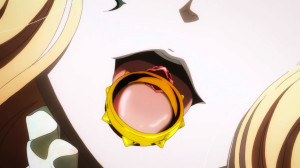 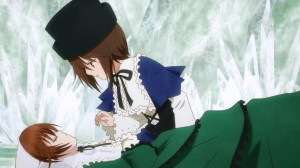 In the end this was a good episode. I liked the discussion between the Juns, the weird harem situation and how everything is picking up. There are still a lot of questions how they are going to deal with the problems left hanging. Jun’s world is still a mess and if they don’t do things right all the development he’s had and all the bonds he’s made will be undone. Have to deal with the Suiseiseki/Souseiseki situation and of course Kirakishou isn’t going to just vanish into the dark without doing anything. And it might be more extreme than her trying to force that kiss on Jun. I’m having fun and glad the series is setting to finish strong.
Score: A