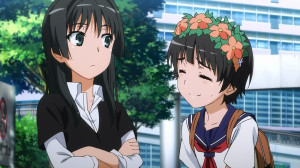 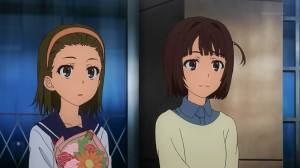 The series is transitioning into the arc that should cover the remainder of the series, but doesn’t mean there isn’t time for a bit of slice and life focus. Obviously it’s not going to be as thrilling as the Sisters Arc, but I didn’t think it was bad to develop characters like Uiharu a little bit. Haven’t seen much of her or Saten in the last arc since obviously they were pretty far removed from what was going on.

Uiharu isn’t really my favorite character, but this episode does show how important she is in others lives. She really was a key figure for Haruue and Banri. Without Mikoto they couldn’t have possibly have saved the day in the first place, but she did a lot in the aftermath. Taking Haruue in and helping get Banri ready for a return to schooling. Saving the day really is just one part of saving someone. Not easy especially for characters like Banri who have been used as test subjects and have had their lives completely upside-down. 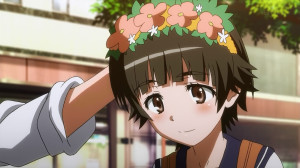 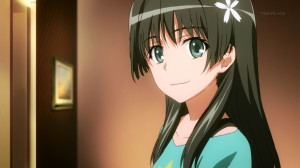 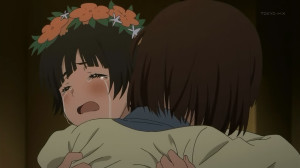 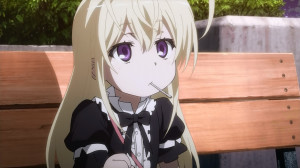 Couldn’t have been easy for Uiharu to agree that Haruue had to leave and live with Banri. They had gotten close and certainly had some similar appetites XD. Hard to have a friend go away and have that gap where they used to be. Still, Uiharu handled it all pretty professionally. She didn’t let that hurt stop her from doing what she knew was right. It’s best for both Banri and Haruue to do this. Gives Haruue a chance to give back after being helped out so much in the first season.

A nice role played by Saten to try and keep an eye on how everyone was feeling. She really is a strong friend in that group. No special abilities, just someone who keeps an eye on things and supports where she can. If it means flipping Uiharu’s skirt to help change her mood then that’s just what she has to do XD. But that doesn’t mean she can’t find the time to tease Mikoto about those cookies either.

Really Saten helped prove her worth when first dealing with Febli. We have some solid interrogators and members of Judgment there, but Saten does seem best suited to talking to a small child. I can’t recall if she has siblings back at home, but just feels very much like her to know how to handle a situation like that. Rather than intimidating them by talking from up high, need to go down to their level a bit. 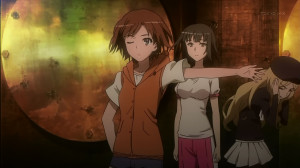 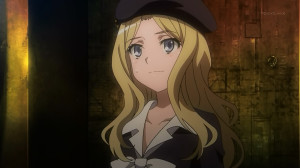 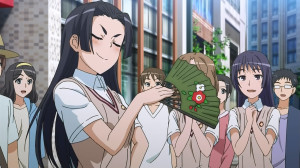 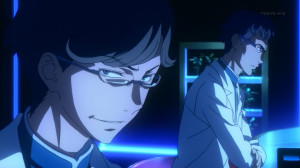 Clearly this Febli will be a key part of what’s about to happen. Can only speculate as to what is up with this girl from the OP. I assume it will somehow tie into the theme of the Sisters Arc though. Kind of surprised to see that Shinobu girl from the Sisters Arc involved with all of this. Who knows what happened to her after she was captured way back, but it should be an interesting connection to keep tabs on.

I think that encounter with Kongou along with the ITEM incident can tell us a lot about the scientists we are dealing with here. They first hired hired ITEM in order to test their capabilities. They wanted to see what those robots could do against the fourth ranked Level 5. Certainly they seemed fairly tough and we don’t really know what happened after the scenes shifted. But that test along with the berating of Kongou for using her powers to stop a criminal makes them seem like quite the anti-esper group. Or at least one that seeks to more heavily control espers.

That guy didn’t seem to like Kongou freely using her abilities. Much more willing to rely on technology like the surveillance cameras or anti-skill (the non-esper police force) to handle a situation. Of course fully ignoring the fact that this would require the criminal to be allowed to get away. Clearly the woman should be allowed to lose her stuff, maybe have her money spent and credit card maxed so someone doesn’t make a citizen’s arrest right? There is some logic in his words or else no one would listen. Reckless use of abilities is dangerous. But let’s face it if someone sends a garbage can flying at you I’m pretty sure you aren’t taking them on with a knife…In the end Kongou took action to actually stop a criminal and props to her. That scene was more for characterizing the scientist behind this than anything else. 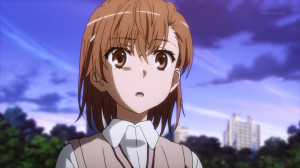 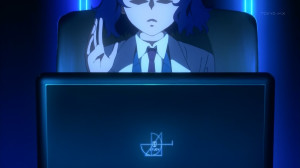 I think we’ve got good potential for a solid ending to the series. Can’t expect what we got in the previous arc, but could still be fun. Though I sure hope they try to find more exciting stuff than having the girls fighting robots again. At least make them an interesting threat. They did manage to scratch Mugino so maybe they’ll be more interesting than I might expect.
Score: B+