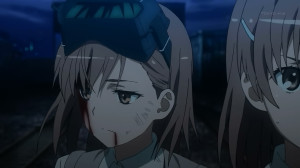 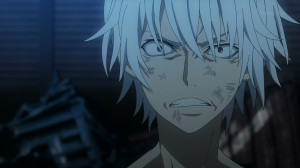 This episode felt like the chance to finally take a breath after the intense episodes that came before it. Of course this episode wrapped up the showdown against Accelerator, but it wasn’t mostly about that fight. We got a chance to see the end of the fight and have a bit of an epilogue wrapping up the Sisters arc. Whatever they do with the remaining episodes can’t take away from just how awesome this arc has been.

I did really enjoy seeing Mikoto stand up for the Sisters and hold her ground against Accelerator. It’s someone she really can’t beat in a fight, but she still didn’t flinch despite how dangerous things were. This was her chance to face her feelings about the Sisters and make clear where she stands. Of course she still feels an incredible amount of guilt for the deaths that had happened because she gave her DNA map, but that wasn’t why she was protecting them now. In the end they are her younger sisters. Obviously not your average kind of sister, but that’s the kind of bond she wants to have. For that reason she can’t step aside and will protect them with everything she has. Think it was hard for Accelerator to actually understand that especially with his messed up view of the whole situation. 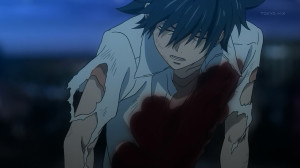 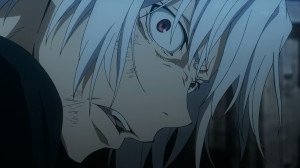 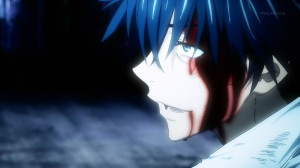 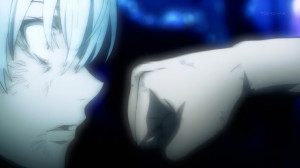 While we can say that conversation with Accelerator mostly served to buy time for Touma to get up I think it was crucial for Mikoto’s character. Of course thanks to the link it also sent a message to all the Sisters. They had to have thought Mikoto really hated or was disturbed by them by her various actions during this arc. The girl was under so much stress so often that she couldn’t really react in a way she might have liked when faced by the clones. This let them know how she felt and that they weren’t hated. Both Touma and Mikoto considered them to be more than puppets or guinea pigs, they were people. I don’t think that feeling will ever really be lost no matter what happens in the future.

Of course the finishing blow by Touma was enjoyable. I actually liked how there was pretty much silence behind it. Just let Accelerator’s thoughts be more clearly heard as the absurdity of the situation just hit him along with the punch. It had to have taken unbelievable willpower for Touma to get up. He’s a battered and bruised mess at that point. Certainly can’t blame Accelerator for being completely shocked at the situation. I guess after you kill 10,000 you generally know what people can take. But Touma had a greater will to fight than the Sisters who saw their whole purpose being to be killed. He had a reason to keep on going and punching down Accelerator before he could hurt anyone else. I don’t even mind how Accelerator got careless and charged in there. So unsettled by Touma’s act of getting up that he charged in to attack directly instead of just finishing him off from range. Probably not easy either for the strongest Esper to fight tactically and in a sense run away from a direct confrontation. 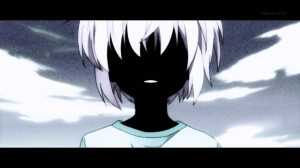 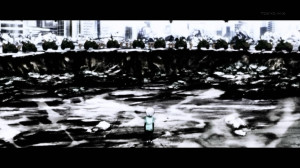 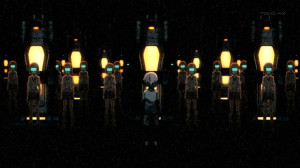 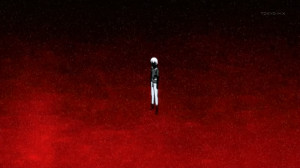 This episode did a good job letting us get into Accelerator’s head more. He’s a lot better defined at this point than I expected him to be. Can see a person who had insanely powerful abilities since he was young. Looking at some of those scenes can see a person who was truly messed up by his circumstances. Can get a pretty good idea how they tested a kid’s esper abilities in this case. To escape the solitude he probably felt like an absolute power was necessary. A power that would keep him from constantly being caught up in conflict or used in experiments. In that case he won’t have to hurt others since they won’t pick fights with him.

Certainly not the worst motivations to want to get stronger, but absolutely not something that can excuse his actions. He was told they were puppets and used that reasoning to mentally keep him going. Eventually reaching a point where one can say there was no turning back. Just someone that was truly messed up and needed to be stopped. In the end he realized the absurdity of it all when that last punch came. This wasn’t the right path to take and along the way he piled up a lot of corpses. That’s something he’ll have to deal with going forward. 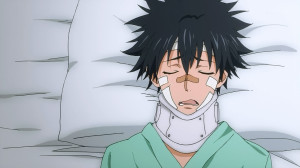 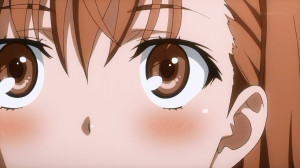 Now the majority of the episode was aftermath. Touma was a mess in the hospital and it’s just too bad he checked himself out because he couldn’t keep up with the medical bills XD. Unfortunately I guess the health care for Level 0s isn’t that great. If it was someone like Mikoto she probably would get the best care without any cost because she’s more valuable. That’s just how that city works.

There were plenty of cute scenes and I do love the interactions with Touma and Mikoto. Get a bit more of the comedy from that guy in how he made a big deal about homemade food. I guess a few more electrical burns won’t hurt anything at that point XD. Of course the hilarity is that she actually went to Saten to borrow her kitchen and make said homemade cookies XD. Just too bad she couldn’t gather herself together enough to actually give them. When you see signs of tsundere Mikoto I guess that means things are going to be alright XD. Did manage to get him to address her by name which from Kuroko’s reaction to her expression must have been a serious win from her point of view. Kind of wish we got to actually see that expression for more than a brief second, but oh well. 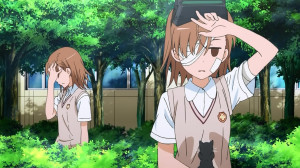 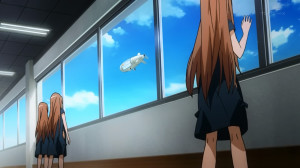 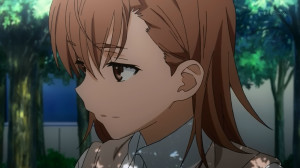 Touma also helped add a perspective to her guilt about the deaths of all those Sisters. Certainly her giving up her DNA map allowed these experiments to happen. A lot of Sisters died before this situation was ended. However, if it wasn’t for what Mikoto did they never would have existed at all. Over 10,000 Sisters were killed, but thanks to Mikoto over 9,000 will get to keep on living. When dealing with a situation like that it’s hard to really see things from the broader perspective. Those Sisters will keep on living and that’s not an evil thing.

Glad we also got another brief scene with Mikoto and Misaka 10032. Of course you can say that she fits perfectly as a little sister. A few times when Mikoto tries to get things across she is just incredibly annoying XD. Just like family really. But Misaka understands just what Mikoto and Touma did for her. Their existence that was only supposed to be ended by Accelerator now has a reason to continue onward. She and I presume a lot of the Sisters do want that connection and bond. They will be struggling to find their way in the world, but they won’t be out there alone. That kind of scene just helped cement that bond that has been forged through this arc. 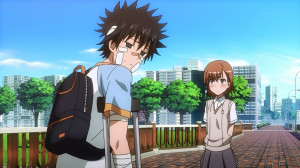 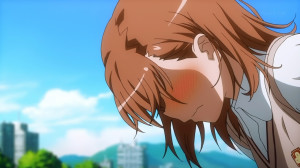 Whatever happens down the road I can say this arc was absolutely outstanding. They can spend the rest of the series doing whatever and I’d still say this was just amazing. With the remaining episodes I doubt we’ll get a massive arc like this one, but curious to see what is done with the rest of the season. This episode was just a nice way to end an amazing arc.
Score: A