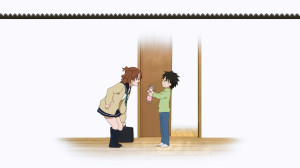 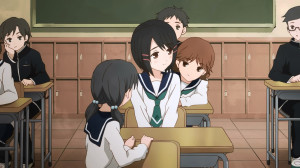 Have to say I really don’t mind that the series is taking its time in building things up here. This was a good episode in order to gain insights about Jun and why he was a shut-in originally. Unfortunately, seems his suffering came mostly because of how his interests were treated by his classmates. Probably not the first time we’ve seen a character mistreated because his interests don’t line up with what is expected based on their gender. Jun was clearly a kid with a great deal of talent in regards to design and apparently sewing. Made his sister a doll and had some nice creativity in that design for the play. Think what really set him on edge was his male classmates teasing him. I don’t think Jun was the type to flaunt his interests, but the reaction they got probably made him all the more apprehensive about showing what he was interested in.

Then of course came in the incident at the assembly. What the heck was that teacher thinking? I mean yeah it did slip in with his homework so one could assume Jun intended to hand it in, but he clearly never actually talked to him about it. Instead the brilliant plan was to make sure everyone knew about it…by announcing it at an assembly! Couldn’t have made it more public unless they yanked him to the front of the school and showed the design on a projector! I mean seriously does that teacher even understand children at all? Good luck not turning into the laughing stock of the school at that point. I wouldn’t be surprised if Jun stopped attending school from that day onward. Kids can be damn cruel and that was more than enough ammunition to use against him. 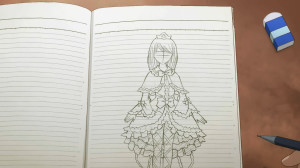 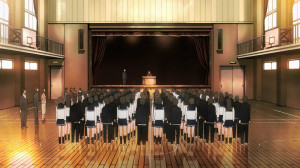 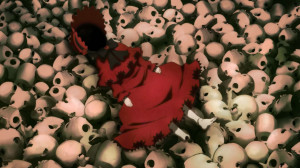 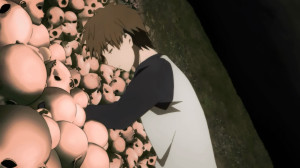 Just a shame for Jun overall. Clearly until this point he’d completely stopped sewing or designing period. Just shut himself away and eventually reached the point we see now. Only this incident has given Jun a reason to tap into those skills and interests once more. Though certainly a lot of work to put together Shinku’s outfit just with the raw materials alone. Really cutting a lot of time from everything else just to make this happen. Hopefully this all works out for older Jun long term.

At least Saito is helping out and trying to have his back. I can’t think she’s directly involved in this since until the end of the episode the 7th doll hadn’t made a move yet. So for now I’m willing to believe her actions are genuine. Just hope that Jun can kind of take a hint at some point here. Certainly she gets more involved with him than most people would considering his pretty quiet demeanor.

And talk about a close call in getting Shinku completed. Getting caught by those vines wasn’t a good sign. Jun was really under the gun to find Shinku’s parts in a mountain of fakes. Maybe it’s the fact that he’s also Jun that drew the necessary parts to him. Since I can hardly believe he just got that lucky when it was needed. Not all that surprising though that Shinku’s first action upon wakening in that place was to smack Jun around. The peaceful appearance in the book doesn’t quite match up to the reality when dealing with Shinku. Hopefully now with Shinku awake we might get some more answers as to what is going on here. 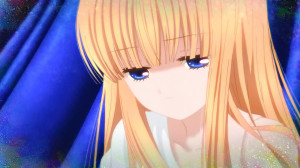 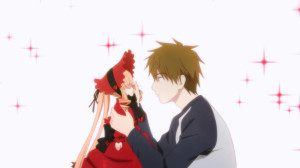 So overall this was a good episode. Just an episode where it doesn’t feel like a lot happened. Jun put Shinku together and we got a brief look at his past along the way. At least now Shinku is back and things should get more interesting going forward.
Score: A-