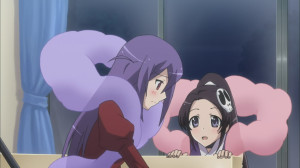 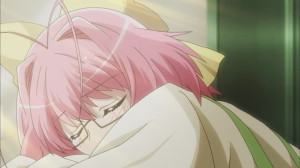 The World God Only Knows makes its much awaited third appearance in anime form, animating the famous “Godess Arc” from the manga. While I originally read the manga material upto the material covered by the first two seasons, I stopped reading around just before the Megami Arc started in the manga. Given that TWGOK had been animated twice with two seasons (even with some notable omissions in season 2) I wanted to really enjoy the franchise and watch it animated as the story continued (if and when it did).

A third series was a surefire, and from what I can surmise from the first two episodes, this may be this franchise’s last hurrah as an anime series, and with that in mind, it seems like all bets are off.

Season 2 was kind of a hit or miss for nagicakes, who did a great job of blogging the first two seasons here at Anime Evo. Certain girls didn’t sit well with her, and Hakua kind of rubbed her the wrong way. I can’t really comment on the anime adaption’s version of Hakua, but I very clearly didn’t dislike Hakua. In my eyes, I think, things were getting interesting with both Hakua and further more, when Diana and Temari got introduced in the manga. 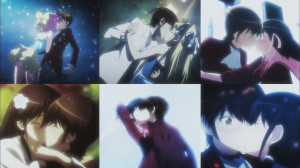 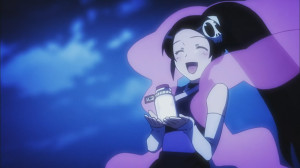 Its kind of sad that a lot of material is being skipped over just to get to what are clearly the “juicy bits”. What is kind of difficult is that some of the girls that are actually a big part of the Goddess Arc are actually being skipped over. While Kanon, Ayumi, Chihiro and Shiori have been covered in the past two seasons, Yui and Tsukiyo, have not.

Now, while I personally have read enough to at least have been introduced to Diana and Temari (and there’s 2 OVAs that cover that part), the other two girls are completely new territory for me as well. I think the show does an admirable job of really quickly giving the audience the cliff notes of the last two girls. 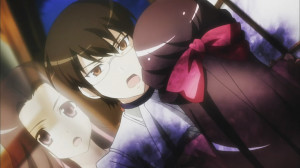 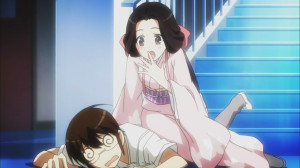 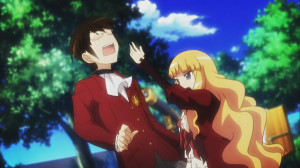 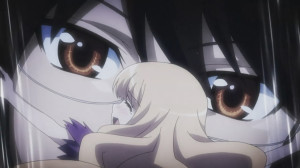 Yui actually gender swapped with keima, and went on to conquer HIM, while Tsukiyo is a lover of beauty who went chibi-doll sized and had Keima rescue her. Interesting stuff, and stuff that would’ve been nice to see for sure. In light of the actual premise of the Godesss Arc storyline itself though, I’m kind of willing to give the series a pass though.

The Goddess Arc, or Megami-Hen throws out a little concept that the series had been teasing since its beginning, namely that some of the girls that Keima conquers actually remember him. Its happened with Kanon for sure, and the other girls have given signs here and there. What happens when these girls, who’ve each been conquered by Keima learn that he… kinda does this as a day time job?

I’m sure a portion of the audience was hoping for Keima to get “what’s coming to him” or something along those lines. Of course, that’s hardly the case as the whole situation gets a touch worse for Keima.

Not only are there some girls that remember him and their encounter with him, but they hold Goddesses that were the original entities to seal off the Spirits from Hell that he now seals with Elscie. Keima, who’s shrugged off things and kept his involvement with these girls to a minimum post “job”, gets a taste of true horror as he ignores Diana’s warnings and doesn’t act fast enough to save Kanon. 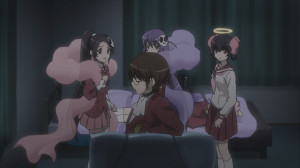 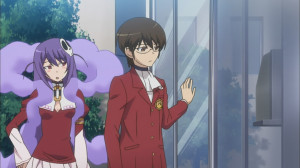 I think the biggest change in this series since we last saw it, is in its main character. Keima is driven, serious and not kidding around this time. He’s not avoiding responsiblity, he’s not treating life as some sort of game, he’s dead serious. After seeing Kanon get attacked, and finding out that the other girls he’s conquered could be in danger, he’s using every trick he has to try and save them. 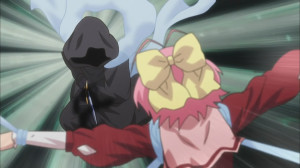 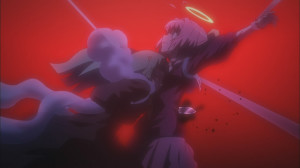 Kanon, having gotten attacked just adds to the tension already being built over Keima. At the start of the series its obvious that Keima has been thinking about his “job” and that it is affecting him. As much as he likes to use game jargon and terminology to distance himself from everything that he’s done, experienced and encountered, it doesn’t seem to be working. In typical Keima fashion, his first instinct is to avoid as much contact with these girls that he “conquers” as possible. 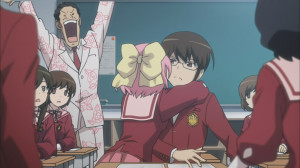 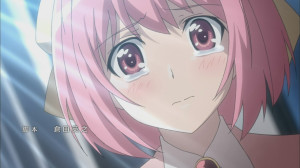 It takes Kanon coming up to him, taking the initiative and then getting attacked, that truly brings Keima to the point where he can’t escape anymore. The obvious truth is that Keima does give a damn about all the girls he’s conquered. In fact, I’d go a step farther and say that he actually has developed feelings for each and every one of them. The whole “Conquering God” thing is the facade that allows him to continue doing what he’s doing, and keep a reasonable amount of deattachment from everything that he’s doing. 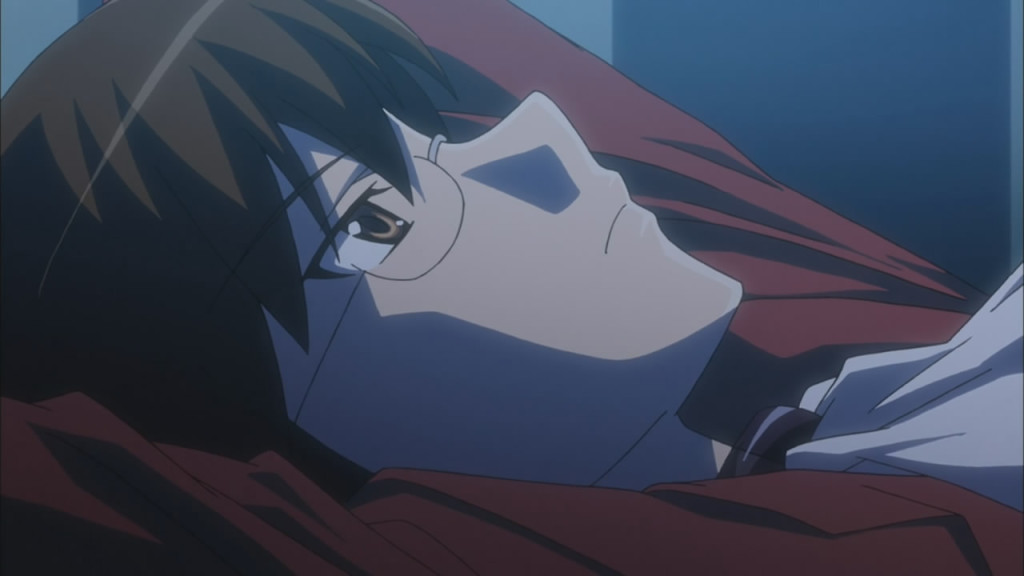 Its in these first two episodes, that this fascinating bunch of revelations about Keima are revealed, and its done beautifully. The whole concept is thrown at us, its not delivered through exposition, its just SHOWN through Keima’s actions, attitude and behavior. Keima stops running away, nor does he try to look at the whole situation he’s in from a gamer’s prespective, a dating sim gamer at that. Rather, much like he has been since the beginning, he’s been using his remarkable intelligence, planning and warped world view to try and save each of the girls that’s needed some sort of love.

In essence, this whole moment and character reveal is what the series has always been about. There’s obviously the gamer sterotypes, the whole dating sim archtypes and what not, but its never been about “how many girls can Keima capture”…. or has it? 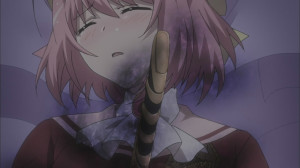 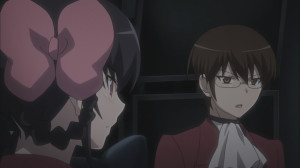 See that is the other brilliant thing about the Goddess Arc, in a manner of speaking. With Kanon’s life ticking away, and a week’s deadline, Keima needs to find, gather and power up the remaining five goddesses. Funny thing, much like the demon souls feed on negative emotions, the Goddesses are powered up by positive emotions, love being the most powerful. Cliche? Maybe, but it kind of fits and really works in the framework of the series. 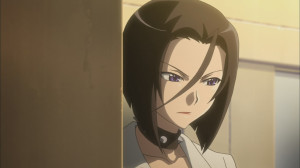 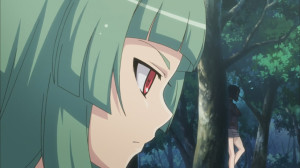 There’s also the fact that Keima’s teacher is somehow involved with this whole mess. Until now I only viewed her as a side character, the part of Keima’s life that’s of the real world. It seems that she has some pretty high stakes in all of this. And from the looks of it, Keima’s theory that he was actually made a buddy with Elscie to actuallt revive the Goddesses may not be off the mark. The question is, is the good sensei friend or foe? Another interesting development in Keima’s current predicament. 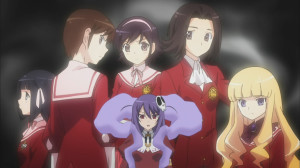 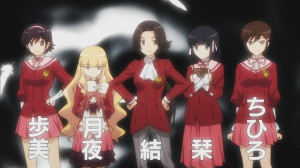 So now… Keima not only has to reconquer and deal with his feelings for some of the girls he gotten to fall in love with him, but he has to conquer them all again, at once. In gamer terms, he’s definitely going for the harem route, but the reasons are what make this whole arc so frigging interesting. Keima, therefore, has to go back towards being even more detached, machine-like, and try and capture all 5 girls at once.

The problem is, we’ve easily been shown that Keima actually cares for these girls. Now, he has to gutt down, and make them all fall for him, basically fool them all into thinking their the one, behind each other’s backs. He’s doing some truly despicable stuff here, and this time there’s no memory reset, or anything else. Yet, he’s got to do it, for everyone’s sake. 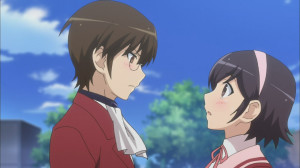 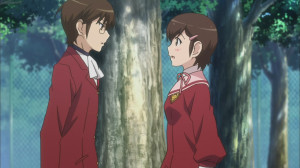 Its because of a grand premise like this, that I do feel that this will probably be the last season we see TWGOK animated. While its not impossible to get another season after this, it seems unlikely. I think it will depend on the final episode count (which is unclear right now), but I’m assuming, given the pace of the first two episodes, that this series will be a 1-cour (13 episode) series. That and 3 seems to be the final number for most manga/lightnovels of this type, with Zero No Tsukaima probably being one of the few exceptions.

And if this is the last time we see The World God Only Knows in Anime series form, then I think its atleast going to be quite the ride. I’m looking forward to it, and looking forward to actually blogging something regularly again! 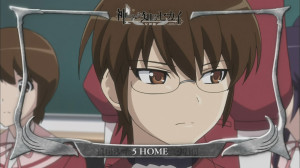 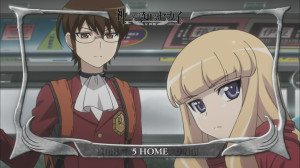 Keima’s big effort to conquer 5 girls at once continues with the next episode. See you next time!