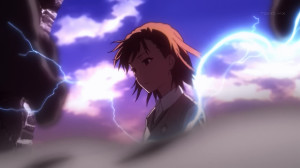 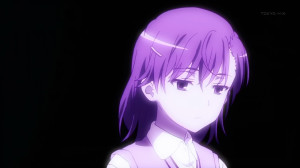 The despair just keeps on building up and now has even yanked Touma into the equation. I mean wow, completely expected Mikoto to be seriously upset by her plan failing but this was another level. She just went into pure depression and then responded by unleashing her rage on that facility. Even knowing that she couldn’t end it like this, she needed somewhere to dump her rage. It didn’t matter at this point if she was stealthy or not. Since ITEM saw her there there really wasn’t a point to it anymore. Though somehow I don’t think she really cared anymore.

This was just painful and a dark place for Mikoto. When you start arguing with yourself it is never a good place to be. She was trapped in her own dark thoughts and couldn’t find a way out. The only option remaining seemed to be to crush every possible facility until they gave up. But frankly that plan had a lot of holes and I’m sure Mikoto realized that. The more you crush the more they can outsource. Just becomes a constant cycle of destroy and relocate. Maybe at some point she’d do more damage than would be worthwhile, but how many clones would realistically be left by then? 1,000? 100? It would take a long time and this experiment isn’t going to slow down any time soon. I really worry what Mikoto thought about doing at the end of the episode. She really seemed in a hopeless mindset and anything she’s thinking of doing right now can’t be safe. 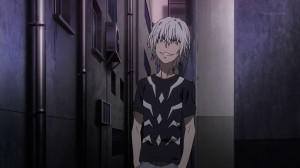 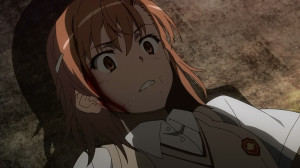 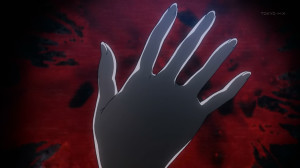 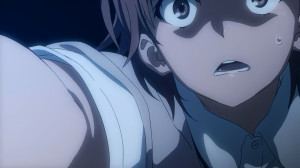 But damn, what a time for Mikoto to destroy that lab. Of course that feed that was focused on the latest experiment had to still be up…I mean geeze, she already saw one clone die and now had to watch another. How anyone can remain sane in this kind of situation is beyond me. She’s watching herself getting killed over and over and blaming it all on herself. Even though she didn’t ask for this or want any of it to happen she will still pile all the pain and responsibility onto herself.

What a horrible mess. I mean Accelerator just obliterated MISAKA. Apparently reversing the blood-flow makes the body explode or something…What a way to die, though hopefully it was over before she could feel anything. These fights are just terrible. Throw these armed girls against someone they can’t possibly defeat and then have them die in various ways depending on the situation. 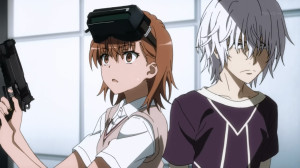 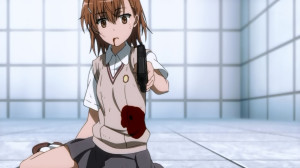 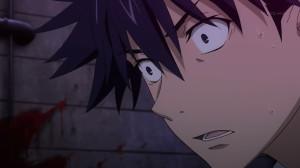 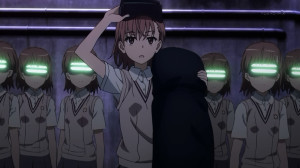 The earlier flashback with Accelerator was interesting. Shows how he wasn’t really all that psyched up when it started. He just figured he’d get to fight some clones of a Level 5. It’d be fun, exciting, and that is that. But then the reality hit him that he’s fighting these weak clones and these are fights to the death. Before you could at least feel some sort of shock out of him at what he had to do here. Now he can just chill out and go and buy dinner after. He’s bored and has gotten used to slaughtering these Sisters.

Though if watching the video was bad, actually stumbling onto the remains of MISAKA had to be pretty bad as well. I mean god what Touma found was a total nightmare. A scene of carnage and death with bones and blood just everywhere. Especially for someone who has no idea what’s going on the shock had to be massive. Kind of scary as well how quickly it was all cleaned up. What an ugly situation. Butchering clones and having other clones clean up the remains. No wonder they can’t really see themselves as humans. Get treated like spare parts and disposable lab rats. Also has to be a crazy and shocking scene to just have all these clones show up and somewhat explain the situation. He’s left wondering what is going on here and what Mikoto knows about it. 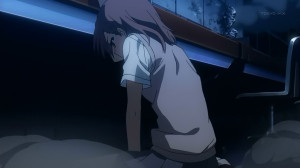 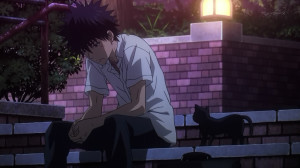 It was an ugly affair and a torture for Mikoto. But things are continuing to move forward. Mikoto seems to have a last ditch plan and Touma is closing in on finding out the truth. What these two can do about this experiment remains to be seen though. The next episode should be pretty good though.
Score: A-