Comedy is a staple of the slice of life genre of Anime. What happens then, if you add a touch of the magical and supernatural into the mix? Hataraku Maou-sama is definitely the answer to that extremely odd and unique question. 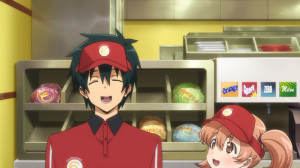 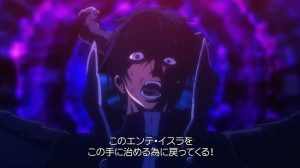 The series can be summed up by its name, Demon Lord, Work! The story follows Maou Sadao, a Demon Lord from the world of Enta Esla that gets defeated by said world’s sacred Hero and is forced to flee dimensions. Here on earth, Maou, alongside his faithful general Ashiya, works to live in modern day Japan, as a Mg Ronalds Fast Food worker. If the premise sounds a bit whacked to you, then it really is. Its also absolutely brilliant. Pondering the concept of a Demon Overlord working at your local Mc Donalds… It is definitely a fresh, unique and crazy new concept.

Truly bringing the concept home, the series is rife with a huge interplay between the classic “Demon Overlord” tropes, combined with some rather well done, comedic slice of life moments. 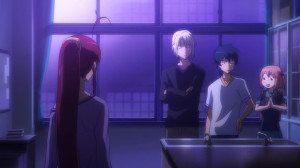 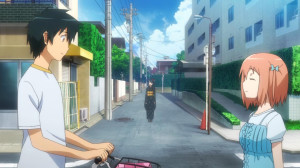 At its heart, Hataraku Maou-sama is a pretty simple show. The sheer brilliance of the show is in how perfectly and gracefully it executes the simple stuff. The characters are almost stereotypical, but the juxtaposition of those character archtypes with modern day life of a poor man in Tokyo is what the series does so well. There’s the classic slice of life elements, a girl that’s interested in Maou (hell at one point, the series barely avoids moving into harem show territory… barely.), there’s issues with living expenses and of course, then there’s the big presence in Maou’s life… Emi.

Emi, turns out to be the hero that defeated Maou in Enta Esla, and in a strange twist of fate, ends up following him through dimensions. Emi is perhaps the series weakest character, a rather classic tsundere character, but there’s the added twist that she’s the hero who is bewildered by a changed Demon Overlord who continues to live respectfully, a good and honest life on Earth. 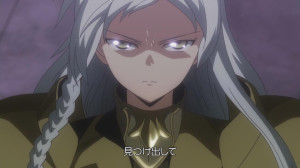 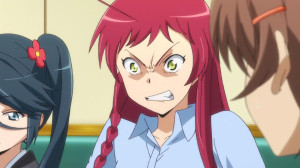 Perhaps one of the major issues that the show kind of side steps or dances around is the character of its main character. From what we are led to believe, Maou was a vicious demon lord that caused suffering in Enta Esla, yet in the series he is the most likable character there is. You know a series strikes gold when its main character is someone that you can root for. At the same time, the whole issue of whether Maou was indeed an evil villain before coming to Earth and Japan is never addressed. Given that the series is based on a light novel series, its possible that there’s more to the story that meets the eye in that regard.

And while the issue of Maou’s past morality does arise every now and then, it hardly is noticeable for long. There is plot progression, as more about the world of Enta Esla and its inhabitants that cross over is revealed. The series features some really awesome action scenes, especially when Maou powers up and uses his Demonic powers. These action segments are good, but the truly great moments are when the series sticks to its slice of life and comedy routes. 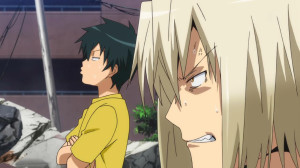 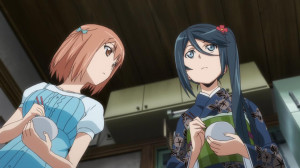 It’s worth mentioning that Ashiya, Maou’s Demon General, is the show stealer in terms of comedy throughout the series. Nearly every line uttered is sharp, well timed and will have you burst out laughing. Yuki Ono is phenomenal in his performance and makes Ashiya the funniest supporting character that’s come out of the Anime Industry this season.

The show’s cast of characters, are all pretty well done, and as mentioned earlier, play off nicely between the whole ideas of the supernatural religious fantasy meets slice of life. If there’s anything that can be held against the cast, it’s that there really isn’t a true dominant antagonist, but then again a story like this rarely needs one. 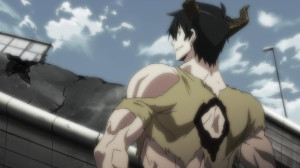 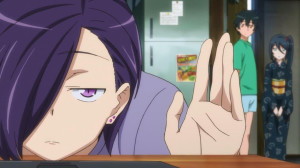 From the production side of things, it’s easy to recommend Hataraku Maou-sama. The actions scenes are exceedingly well done, the art style is nice and crisp and the rendition of modern Tokyo is pretty believable and highly immersive. The world building this series does of the modern Tokyo through the eyes of a supernatural being like Maou, is exceptionally well done. Character designs alternate between the Enta Esla versions, which are far more generic, and the earth versions of each character, which definitely steal the show. It’s hilarious seeing someone like Lucifer, appear to be a short 16 year old kid, while Maou’s demonic form is that of an extremely buff, extremely Gaaar! character. (Look Gar! Up if you didn’t get that one XD)

The sound work is masterfully executed. The seiyuu work of both Ryota Ohsaka as Maou, and of course, Yuki Ono as Ashiya is the real gem in this series, and the other seiyuu do a fantastic job of keeping pace. The music is a nice mix of Japanese Pop Rock and more atmospheric instrumental stuff. The OP for the series, performed by nano.RIPE is particularly sweet. 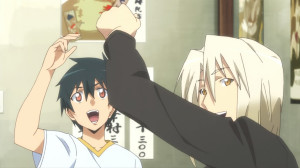 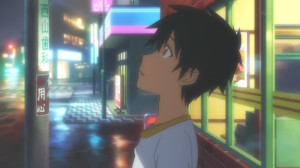 While Hataraku Maou—sama’s production values are great, the fact that they service the anime’s story, characters and comedy exceptionally well is what matters. It brings the experience of the series together.

In the end, Hataraku Maou-sama! can be seen largely as a hugely entertaining series, one that continues to deliver a consistent quality of interesting story, slice of life elements, character moments and stellar comedy. While the story never really reaches intense levels of awesome, it’s still very very good. Hopefully this franchise gets a second season somewhere down the line. Until then, we award the series with a Solid A Grade for doing nearly everything right, and doing some things, better than most.