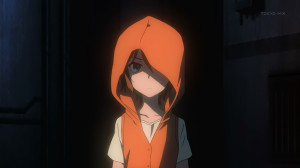 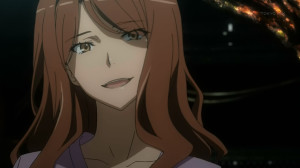 This was definitely an episode worth waiting for. Mikoto finally got some extended action against a pretty capable opponent. Despite the fact that we had a Level 5 up against a Level 0 it wasn’t nearly as one-sided as that would normally be. Frenda of course is a specialist with the tools and experience to go up against Espers to you can’t really compare her to an average person. I just thought this was a really fun episode to watch. Just a lot of action and some pretty good dialogue between Mikoto and Frenda. Mikoto is really getting a good introduction to the dark side of Academy City in this arc.

Unfortunately for Mikoto there just wasn’t much information that Frenda could hand over to her even if she wanted to. Clearly this ITEM group doesn’t care much about motives or morals. What they do is a job, and that’s it. Doesn’t matter who is the good guys or bad guys in a given scenario. The only thing that matters is who is paying the bill. Of course could take from this fight that ITEM is just a bunch of mercenaries, some of which just get their kicks from what they do. There’s really no point in negotiation or appealing to their morals. 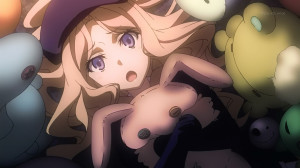 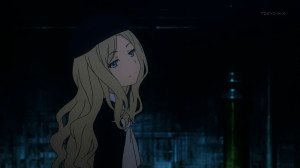 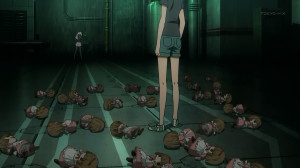 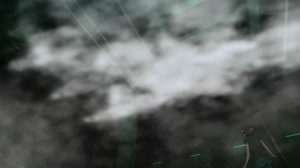 This is going to be a tough situation for Mikoto to deal with though. She’s running low on gas and has been running herself into the ground. Just one of those girls really pushed her hard and that was a Level 0. Who knows how many of these girls are Espers and what kind of abilities they might have. Mikoto is a pretty powerful Esper, but she doesn’t have a ton of combat experience. Sure, she electrocutes thugs and tries to fry Touma, but this is something else entirely. These are life or death battles against people who do this for a living. She is going to need some luck and use her head since her exhaustion is bound to become a handicap.

I just really like how they dedicated almost the entire episode to this fight. Frenda was a pretty entertaining opponent. She just threw a variety of clever attacks towards Mikoto and although she underestimated how powerful she was, Frenda still managed to come close to winning. Combat experience and being able to bluff can pay off big. That tape that she could lay out to set up her explosives, the flash grendade, remote weaponry, and even the gas all had their uses. Can’t say I expected Mikoto to have such a hard time, but it might be because she also underestimated her opponent. Frenda had some pretty strong hand-to-hand combat skills and was beating the crap out of Mikoto there. It didn’t hurt that Mikoto was too worried about setting off an explosion to attack conventionally, the sleeper hold was about all she could manage safely. 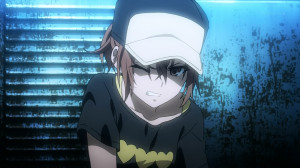 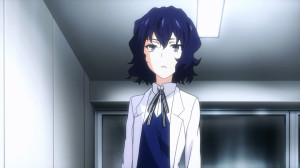 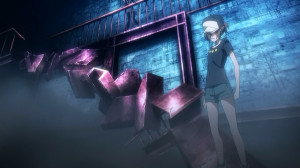 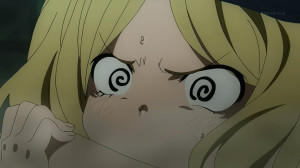 Frenda is a cute, but fairly twisted character. Definitely gets kicks out of taking down her opponents and maybe the fact that she is a Level 0 fuels that rush she gets from defeating strong Espers. Though she wasn’t so far out there that you couldn’t treat her as a person. Still had a pretty human level of greed for that bonus or not wanting to go to a private resort and be unable to show off in a swimsuit. Pretty comical as well by the end when she wanted to sell her companions out, but actually couldn’t because her tongue went numb XD. Good comedy from Mikoto as well completely misunderstanding the situation.

Mikoto did pretty well in this fight all things considered. Using magnetism to escape an explosion, avoiding the fall after the staircase blew up, powering through Frenda’s assault and getting that sleeper hold in, etc. She was trying not to push it because of her exhausted condition and the fact that she still had another facility to hit after this one. Unfortunately pacing herself just wasn’t an option here. She took more hits than she probably wanted and came pretty close to getting killed a few times. It doesn’t appear that things will get any easier with Frenda’s backup arriving to save the day.

Of course there may not be time to hit the other facility. They clearly don’t plan on getting wiped out by Mikoto and are already trying to evacuate. Though it appears that scientist who was behind the Testament has her own plan to put into motion. Hopefully she can assist in bringing this facility down, since Mikoto isn’t likely to get out of her mess any time soon. Any help is welcome, but I do worry about this. That girl isn’t an Esper and I doubt psychological tricks will work against members of ITEM. Just have to hope for the best. 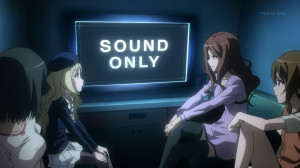 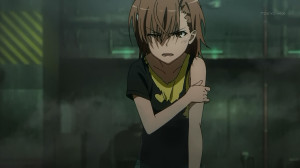 Anyways, this was a pretty entertaining episode. The combat was fun to watch and there was good banter between Mikoto and Frenda. Things are likely to keep building up too with that help arriving on the scene. It’d be nice if Mikoto had some backup, but likely that she’s on her own here. Wish her luck and look forward to next week.
Score: A+