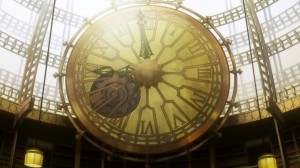 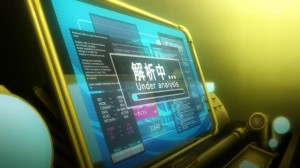 Well it’s only fitting that the fate of the world would happen to be on the line. You can’t have an RPG adaptation without some stakes XD. I did find interesting the dilemma being faced by JPs. They have a lot of resources but they are also limited. If they focus entirely on helping those who have gotten caught up in this disaster then that’s resources they can’t spend preventing a much larger disaster. In a week everything will be gone.

This really does give the feeling of an RPG kind of setup. They have six Septentriones left to defeat. I wouldn’t be surprised if the monster from the previous episode was only the lowest rank of what is going to come. Of course we still haven’t gotten much information to this point. The Japan Meteorological Agency certainly is predicting a pretty big disaster, but there is so much the main characters know nothing about. Just that these things are coming from another world and have an interest in killing a lot of people. Of course we’re only in episode two, so I wouldn’t expect to get all the answers from the beginning. It’s just a tough situation when you have major disasters striking all the time and yet this is being made to sound like nothing compared to what will come. 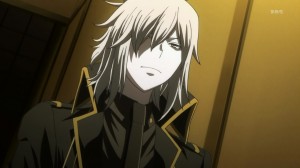 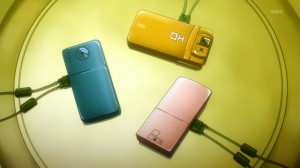 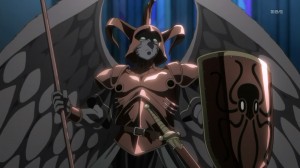 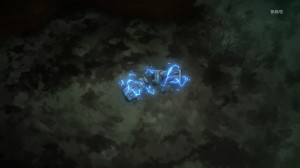 I’ll also say that the Chief Yamato is pretty bad at getting people to work with him. Generally when you just tell someone to obey you ….you can get mixed responses to that. Seems like he’s also got a tie to the mysterious person we’ve seen a couple times. Could be a former member of this organization that went rogue, but who knows. At the very least I can’t imagine he’ll be a cheerful ally. At least Makoto seems like a good person. Obviously she’s conflicted about not being able to help everyone while having that heavier burden hanging overhead. She knows that if they don’t prioritize then a lot more lives are going to be lost, but doesn’t make it easy to not get involved.

The most pressing mystery right now though is regarding the main character’s cellphones. Somehow that Nicaea is giving this ability to summon demons to the public and it’s at a far more advanced level than JPs. But I did like how we got more information on how this all works. So the program quantifies the ability of the person summoning and uses that to bid for demons. But if the person isn’t skilled enough in the first place they’ll just get killed by what they summon. So if the main characters didn’t have enough ability they might have been killed instead of saved. Shows that Hibiki has plenty of ability since he was able to bid for something as powerful as Byakko.

This might also explain though the demons we saw earlier (besides that boss one). Those people didn’t have enough ability so they were killed by what they summoned. That seems to be a decent theory with that cellphone going berserk and summoning all those weak demons. And once again we return to wondering just what Nicaea is and what role it has to play in all of this. That site that can see people’s deaths before they happen and even download the summoning programs into cellphones. It’s just a big mystery and a dangerous one. 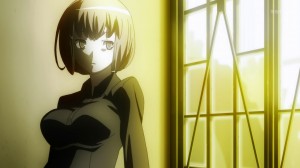 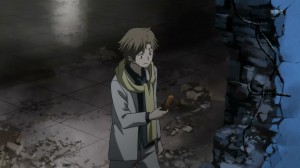 Tough spot there for Daichi. Sadly his demon was not exactly in fighting form and had to just hang out there and watch Hibiki fighting. Easy to lose track with series like these, but just yesterday their lives were pretty darn normal. Everything has gone to hell, but doesn’t mean they can suddenly adapt there. While I’m sure Hibiki would have been willing to do this alone, there just isn’t a chance that Daichi will leave him alone. Though if he’s going to get involved might need another demon so he can do something like the main one is getting patched up.

Not a strong episode for Nitta, but she did go through a lot here. Held captive by a mysterious organization, seeing the area she’s from in ruins, not being able to find her parents, etc. There is a lot to be stressed out about. After seeing monsters like that hard to be calm knowing that her family may or may not be alive right now. In the end though she’s standing right with Hibiki and Daichi. She’ll be fine and I’m sure chances to step up will show themselves. And really she saved them a couple times in the first episode so she’s doing just fine. 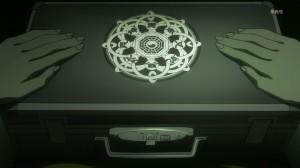 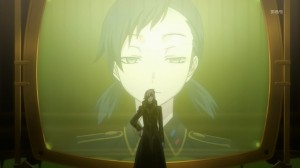 So, now the main group has officially been recruited. I’m sure it’s not going to be easy to track down the missing scientist. Not only because they don’t know where to look, but also because trouble seems to be following them. If the pattern is going to be set then something big is going to happen in the remaining part of Day 2.
Score: B+