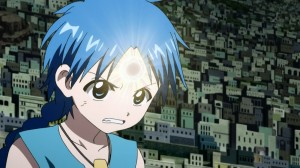 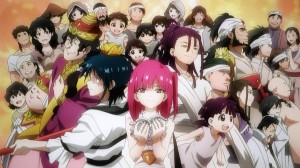 Well the series finishes off somewhat in the way it started. Focusing on the friendship between Aladdin and Alibaba, while giving a fair amount of focus to the rest of the cast. Most major characters at least had a chance to stand out and do something in this last episode….until Fall!

Yeah, they go ahead and make clear we’re going to be back in the fall with another season of Magi. Makes it kind of awkward to say goodbye to a series when you know it will be back in a few months. I mean sure, it’s not a short amount of time, but not like it’s going to be several years. It’s a whole lot more comfortable than some series that just end and you are left praying for more down the road. 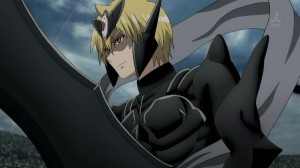 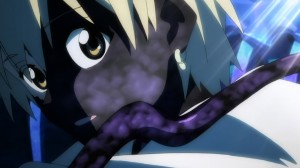 Anyways, this episode wasn’t as dark as it could have been. They didn’t focus too heavily on Alibaba being depressed at his core. Understandably with all he saw and has experienced it’s hard to not hate fate a little bit. Aladdin’s interpretation was nice enough. Fate still isn’t something to like, but it’s something that exists for you to overcome. If there was no fate in the world people might just stagnate having nothing to struggle against. I suppose it takes the point of view that people need challenges in order to really grow. A life full of ease leads to stagnation. Though personally speaking I don’t mind it when life stops giving challenges XD.

This did give a view into what Al Thamien is up to. In the end they are just out to cause everyone to fall and in a sense break them free of fate. A nice enough sounding thing, but really look at how they are going it. What is the point of people being ‘free of fate’ if no one is alive to enjoy it? Regardless, it feels like this divide goes a long way back to Solomon’s time. Sadly, some things just don’t change. 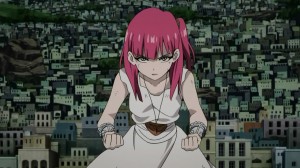 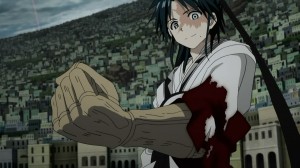 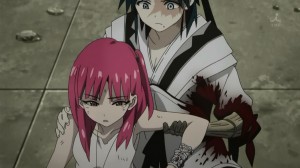 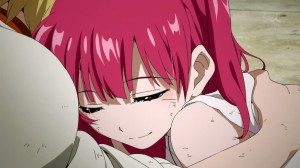 Was nice to see Morgiana manage to have enough to help out. Would kind of suck for her to be out of it for the last episode. A good team effort between her and Hakuryuu to make an opening for Aladdin and settle this thing. It wasn’t easy especially with how weakened Morgiana was at that point and Hakuryuu needing to create an artificial arm to work with. On that note, damn Hakuryuu just keeps picking up injuries doesn’t he? His face was a clear enough example, but now he’s got a fake arm. Oh well, I suspect in that world it’s a heck of a lot better to have that than no limb at all. Just kind sad for the guy that he keeps going through this.

A positive for Hakuryuu is that he did pick up some confidence here. Maybe that came from gaining Zagan’s power as expected. A good break for them though. He’ll be a pretty key member of the group if he can master a djinn equip as well. Let’s hope though that he won’t be needing to replace any more limbs. Credit to him though for doing all he did this episode just moments after suffering a traumatic injury. 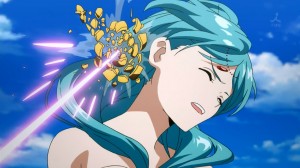 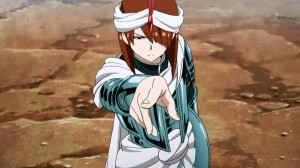 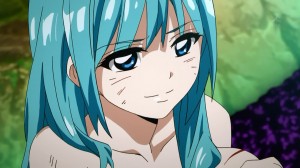 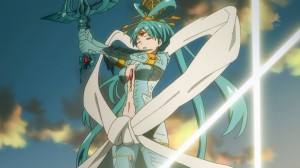 Things went fairly well in Sindria. Will say I feel sympathy for Kougyoku. Pretty well confirms that she was getting played there in order to step up in this episode. I get it was pretty well needed for Sindria to survive, but still sucks. Sinbad probably could have handled the situation himself, but didn’t want to play his card until he had to. At least it kind of makes sense how this guy has managed to create an entire nation and conquer several dungeons. He couldn’t manage that just by being some idiot.

Though you do wonder about Sinbad. Just what the heck has he been through? Half fallen? Already cursed? It’s a bit of a strange situation though again might explain how he has such incredible powers. I don’t know, it just makes you wonder about his intentions a little. I don’t doubt he’s an enemy of Al Thamen, but in the end have to consider he is one force that will be looking to conquer the world. Maybe not in the ugly fashion the Kou Empire is, but if Alibaba is heading down that path it’s not going to be a straight forward relationship.

Still, props to Kougyoku for handling herself well out there. She did clear the area around the island and took care of the pressing concern. It wasn’t a long look at her djinn equip, but it clearly had plenty of power behind it. Yamuraiha did a pretty good job there herself. She held out well and even managed to use her opponents attack to clear about half the island. It set things up nicely for Kougyoku. Definitely can call herself a genius when she invented magical devices like those. While she didn’t take out her opponent herself, a thing called team work did the job just fine.

Overall, I’d say it was a solid final episode. When the episode outright tells you season two is coming there isn’t much to complain about. There wasn’t much epilogue, but really since we’re just at the end of an arc, maybe there didn’t need to be. It mostly just gave a few shots of Sinbad and of course the Kou Empire. There seems to be plenty of adventure ahead in the series and season 2 should be interesting. 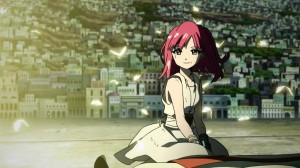 Magi definitely was an unusual series. The series had a lot of action, but at the same time it really did hit you with a lot of low points. Alibaba probably went through the lowest character points in the series. Some of them seemed reasonable with all that he’s gone through, but at times you really did want to just kick the guy and tell him to step up. Maybe the best part was when he was all down on himself was Morgiana going ninja and kidnapping him from the thieves base XD. He really does need others to help kick him out of his funks.

But at the same time Alibaba was a solid character. People had reasons to believe in the guy and when he stepped up it was always good to see. I just hope that future seasons will focus less on him being down on himself and more about him growing as a person. 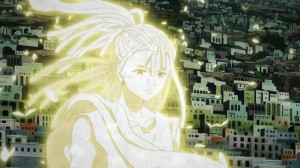 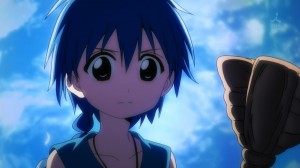 Aladdin was a nice enough character. As a magi there is still more to find out about him, but we’re getting the picture. He’s having to learn about the world as he goes along and while he has potential, it will be a while before he masters more than just fire magic. He really is good for comedy though with his obsession with big-breasted women. Hopefully he can survive upsetting too many of them.

Morgiana probably remains my favorite character to this point. Started off as a very quiet person, but obviously understandable considering all she’s been through. Really started to open up once she had a chance to break free of her past. Still a bit of an oddball, but a good person at heart. When it comes to doing the right thing she will throw herself into the mix and there isn’t nothing wrong with that. Just a fun character really, her reactions around Alibaba are really entertaining at times. 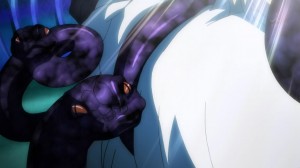 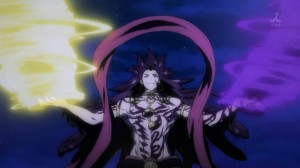 Visual wise the series was alright, though there were moments when you could see it dropping. Kind of funny that the OP portion of Morgiana dancing still remains far superior to what we actually got in the episode itself. I do think when you have something in an OP/ED you should at least try to match it. Overall, the effects were solid for the battle portions so less to complain about in that respect.

In the end, as an anime-only watcher I’d say the series was pretty solid. I know enough that hte series diverted from the manga, but at least with a second season coming they might get back on track in that respect. It still seemed pretty entertaining despite Alibaba spending too much time being semi-depressed. It’s a pretty diverse world and seems to be plenty of room left for the main characters to grow and get involved. Personally, I’m looking forward to seeing more. 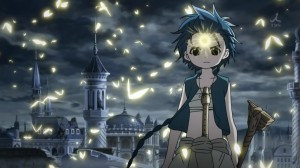 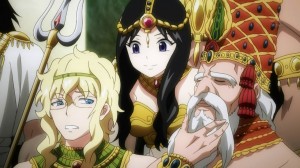 Props to Magi for being a pretty decent show all things considered. It may have had some inconsistent moments, but it was still enjoyable to watch.
Score: A-