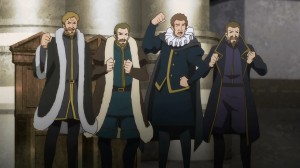 Well in a series like this you can’t expect to save the world in a few episodes. What they did manage to do with this last episode though was still pretty impressive. We got some explanations for why a major war didn’t break out and some hints as to where the series is going to go in the future. Really, they had a few plot threads to take care of and it didn’t feel like they did a bad job with them. It was just hard to have too many deep moments because you had to jump to the next one pretty quickly.

The key thing long-term is that winter stopped any war from breaking out. The cure that Maou gave to the mage girl will give them a major bargaining chip going forward. I mean who is really going to choose to fight a war in the winter when you can get a cure to smallpox that will save millions? Well I suppose there are people stupid enough for that, but that’s beside the point. It’s a key development that should create more chance for stability. With the dual-currency system coming into place that should make things a lot more interesting globally. Though of course just curing smallpox will be huge. As we could see for the Maid Girl that development will be especially key. The lives saved by having a cure changes a lot just by itself. 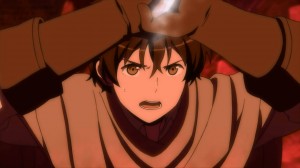 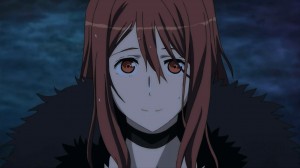 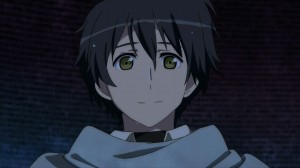 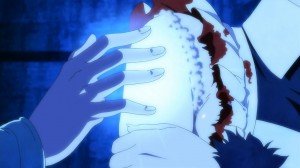 It’s a major breakthrough, but I really wonder how the heck the Maou has all of this? I mean knowledge of more efficient farming techniques, economics, printing presses, weaponry, and even medical cures. Maybe that huge library she was in has all the answers, but it’s still pretty shocking. Also you have to be a bit worried that they are moving too quickly. You change too much at once and there is chaos. They are throwing things out there that we took centuries to figure out and develop. They are abandoning the feudal system, changing their farming, economies, literacy, and even medical techniques. That’s a lot of change for a society, though maybe in the end it is necessary to truly have peace down the road.

A lot of close calls in this episode as well. The Hero managed to get through to Maou though in part it was because he was simply there. Too bad for the Maid since she had to go through hell there. Sadly childhood friends don’t quite match up to whatever the Hero and Maou count as right now. Still, it was somewhat funny seeing how cliche the older spirits were. They completely did the classic “I’ll give you half the world” thing. Sadly negotiations were done in episode one, so no point trying that stunt now. I had expected that the Maous would be able to do a bit more damage than they did. The Hero held his ground rather well especially since he wasn’t interested in fighting.

Still, the reunion was nice enough. Has been a while since they saw each other. Also nice job by the Hero with healing up the Maid. That guy really is broken. He may not be useful for mundane tasks, but he’s still pretty darn useful in other ways. Managed to re-attach the Maid’s arm without any real problems. Even avoided scarring, though really if I lost an arm I’d just be happy to have it back. 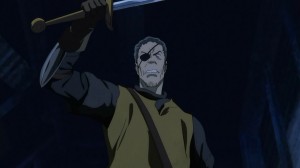 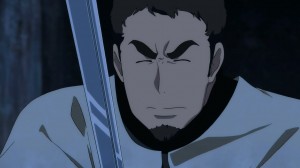 A close call though with the Maid Sisters. Eyepatch man was pretty damn pissed and ready to kill. Surprisingly he kind of had the right target? It was her speech that changed things dramatically so I suppose that does make her the Saint. That in itself is interesting since now Crimson Researcher is more of a symbol than an individual. Either way it was a very bad situation and I would have been pissed if she’d gotten killed by that guy. Props to the soldier who stepped up and saved the day. He wasn’t the best fighter, but in the end he used his head to survive. It wasn’t like those lessons were for nothing. The guy used his smarts and knew what he had to do to win. Smart tricks like using those arrows and using them as guards for his forearms. Also a smooth move to avoid falling to his death. In the end the smarter person won the fight and that’s all that matters. At least the lunatic that attacked is no longer going to be bothering anyone.

Some nice little scenes in reflection for this series. I liked the similarity in a way between the Head Maid and Maid Sister. Shows a bit more why she was so hard on the girl when they first met, seeing something of herself in her. She really did motivate the Maid Sister to step up and change things. Acting in a similar fashion I imagine as the Maou did for her. Sometimes you can motivate people to great things. 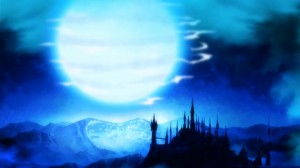 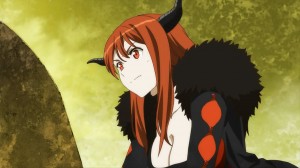 The world is also going to change with the merchant taking a good look at the Demon Realm. It’s a dangerous bit of trading, but I suppose the first path to peace is actually making some ties between the two sides. If they have a money tie, that might be enough to encourage a look towards peace rather than starting more wars.

Of course, the demon realm seems a bit eager to resume hostilities. A lot of progress has been managed in the Human nations, but not as much progress for the demons. They are still more than fired up for war and managing that is going to be tricky. Power is what they respect (as seen by the Hero’s magic), but power can’t settle everything. If the Maou doesn’t handle things properly it will be tough to avoid more conflicts. Even as the ruler her authority isn’t absolute. If no one agrees with her that may lead to trouble in the future. Still, it’s a long road to peace and efforts are still needed all over the place. 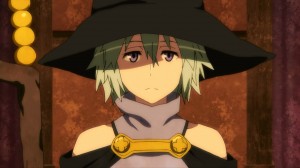 In the end this was a pretty good series. From the start it kind of gave me a Spice and Wolf kind of feel, and in that respect I wasn’t far off. Of course, I still see Spice and Wolf as a great series, but this was interesting in its own way. It really was focused on a wider scale. The issues of the world are complex to say the least. There are so many factors to take into consideration and trying to change the world for the better is slow. There are many who resist change or fear what it represents. So of course everything wasn’t resolved within this series. I fully expect the source material to have a long way to go and we’ve just touched on the tip of the iceberg.

It was pretty entertaining how the characters really never had names. Everyone was just a title for what they represented. The Hero, the Maou, the Female Knight, the Old Man, etc. Of course somewhat easier to remember titles to actual names, but still it is a bit strange when you think about it. Still, the cast itself was pretty likable overall. You had a fun/strange relationship between the Maou, Hero, and Female Knight along with just people like the Maid Sisters trying to find their way in the world. 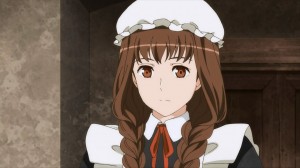 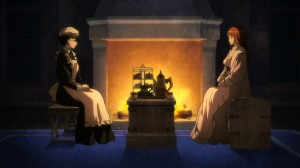 The series definitely wasn’t about the action, though that had its place in it. Of course, a story about finding peace would focus more on how you attain that peace. Unlike some series you just aren’t going to have peace show up if you kill enough people. The Hero suffered early in the series I felt from trying to find his place in the world while only having powers that are useful in battle. It’s easy to start wars, but a lot harder to find a place to stop them.

I’d just say the series was pretty enjoyable. In the end I would have loved another 13 or more episodes to see where the world is going to go. There are a lot of forces at work in that world and seeing how it turned out would have been nice. Still, I appreciate them not outright making it impossible to have another season down the road. This is a good stopping point with Maou returned and a major war being averted. While I’ll say more in my series review, this wasn’t a show I regretted watching.
Score: A