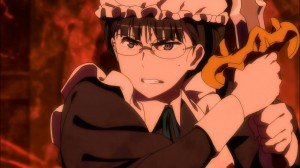 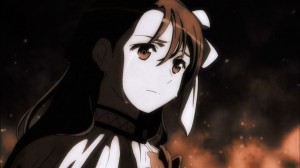 Well a lot of this episode was somewhat expected since the OP spoiled one major event from the very beginning. It did not make it any more plesant to watch the Head Maid get her arm chopped off though. She did put up a valiant effort against someone who is probably pretty powerful. Not to mention she had that very conflicted feeling throughout. She has to stop what the person she cares for has become, but at the same time you are still attacking her body.

I suppose you have to give the Maou credit for hanging in there as long as she did. It wasn’t like she was corrupted overnight here. Unfortunately a loss is still a loss. If Maou in that state gets out the hopes that they all shared will go up in smoke. The Demons will all go full out for the sake of war. What limited hostilities are still going on will pale in comparison to the full out onslaught that would follow. Of course, with the teleportation option out maybe it’s a less critical concern. At least though it would mean very little peace to be had for the demons. They’d have a bloody and angry leader to deal with there. I guess the question now is what comes next. It will all come down to whether or not the hero can stop the Maou in this state. 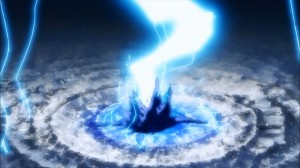 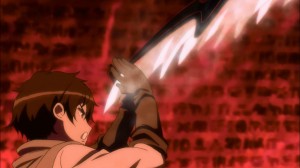 This episode did set up a pretty major showdown though. It showed just how insanely powerful the hero is. He really does have enough power to slaughter anything that gets in his way. If he wasn’t a good guy, he’d have conquered the planet by now. That spell was pretty overwhelming in terms of power. Maybe it was a good way to set the stage with meeting the Maou in this condition. The question being if she’s close to his league even with the power gained by being in that state? I’d suspect she’s at the very least the second most powerful person in the world so he’ll have to be sharp.

I do wonder how they are going to handle this situation. Somehow they need to get Maou back to her normal self. That’s the only path available for everyone to reach the ending they are searching for. Because any other option just isn’t going to go well. If they kill Maou then a new one will come forward to replace her and the war only gets worse. Unless the Hero is ready to repeatedly kill every Maou that comes forward, that’s bad. Bad enough to kill a likeable main character, so it’s really not an option. If they don’t stop her and the Hero falls then the human race is in trouble. If they can rebuild their teleportation then the war will resume and things will also go pretty badly. The only way is to somehow force these previous Maous out of her and return things mostly to normal. This might be the time for the Hero to become someone who can do more than simply destroy. 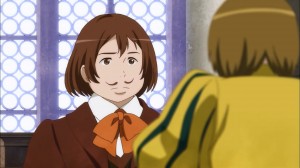 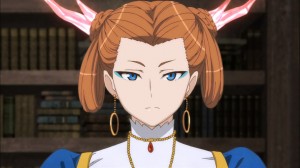 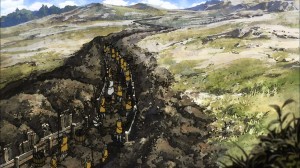 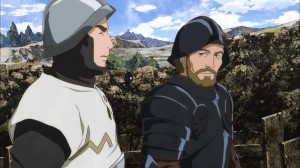 Despite the fact that war is coming on multiple fronts, things are going rather well. The invading army is being fed….Surprisingly this is actually a pretty intelligent tactic. The food keeps coming and they can’t be bothered to start a battle right after feasting all night. I suppose if they can keep them hung-over for long enough winter will set in and the army will have to fall back. I feel bad for the horses, but agree it’s a better tactic to have them sick then having them get slaughtered in a battle. I’m not a horse person myself, but with enough relative that love them I can appreciate going that route.

It’s good to know that the lessons taught by Maou and the Female Knight are coming in handy. The solider kid has turned into a pretty effective leader. It wasn’t like he was using insanely complicated tactics, but he was sure as heck smarter than eye-patch man. I feel bad for the horses in this one, but the tactics were sound. Don’t have to give everyone a crossbow, but rather have the people who are new just focus on reloading them and passing them on. In the end it was a great military victory.

Also proud of that merchant who was able to figure out just what the big ploy was. It wasn’t just about making a ton of money by hoarding wheat. I didn’t consider it, but the idea of creating a dual-currency system might just have merits. Also with the Dragon Princess involved there is a much bigger possibility out there. If Gate City can be turned into an economic hub then that could lead to sustainable peace between the humans and demons. Thanks to the Maou and Hero, we’re already getting the basis of a ‘world’ economy here. If everyone is tied together in business it might help make more sustainable relations. 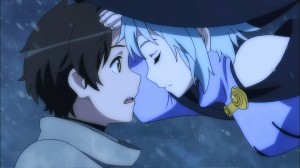 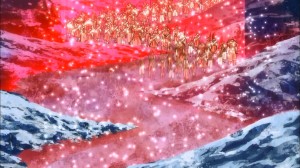 The appearance of the mage girl definitely added some flash to the series. Though, I would really appreciate them delving into explaining her character some more. I’m just not really sure what’s up with this character. Multiple personalities? Multiple people inside of the same body? Either way that was a handy move teleporting an entire army back to the demon realm…which happens to be underground! Yeah, they are just kind of throwing everything at us at once here. I wish Maou luck since we seem to have yet another girl who is interested in him. Though I suppose the most powerful being on the planet is going to have a few women interested XD.

I didn’t expect the demon world to be underground though. It does make things a bit more complicated. They are literally sharing the same territory and the only difference is whether they are above or below that territory. It would certainly shake up the situation if people in general found out what their situation actually is here. 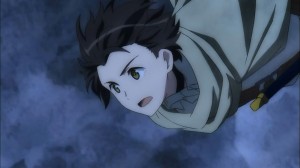 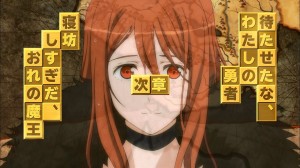 Anyways, now the question is how things will go with Maou. At this point things are fairly stable when it comes to war on the Winter Kingdom, but hard to say how things will go there. But all of it could be meaningless if the Hero can’t get Maou back to normal. It’s going to be tough because this isn’t a problem that simply fighting is going to solve. Frankly this episode had more action than we’ve seen to this point and who knows what the next episode will bring. Should be interesting to see how everything turns out.
Score: A