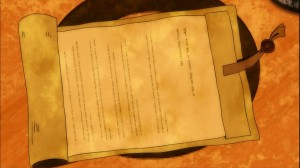 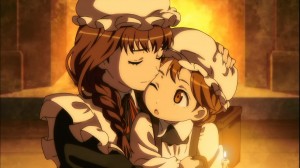 Well you knew that things weren’t going to stay peaceful for long. I probably should have expected Church trouble at some point. I did watch Spice and Wolf after all XD. But honestly, what a troublesome situation to be stuck in. Someone starts changing things and unleashing some impressive new ideas so obviously they have to be evil…Not like that information helped them back territory. The problem is that I’m not sure who is exactly behind this. If it’s a conspiracy from the laughing idiots of the last episode it could be a pain, but I could see a church of that period pulling this anyways. They are tied tightly to this war so it’s not really a surprise they’d be causing trouble like this. The Winter Kingdom has become more peaceful after all and I’m sure they can’t stand that.

But regardless they have to do something. The Church won’t take kindly to being ignored and at worst could invade that village with some holy army. While the Hero could just wipe out any threat that comes their way, it isn’t that simple. They can’t end the war by him going around and massacring anyone that fights. This isn’t Gundam 00 here. They can only find peace by playing their cards right and carefully taking action. Unfortunately it isn’t an easy thing to do and has to be frustrating for everyone involved. It isn’t always about who has the most power. Appearances matter and things could get worse by taking an overly aggressive course of action. 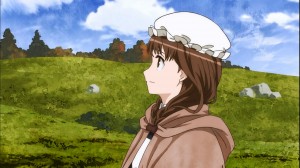 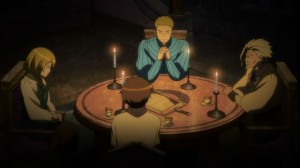 I’m glad the Hero stopped the Winter King before he said anything. There was no way they were going to actually go ahead and sacrifice the Older Sister. There may be sacrifices needed for peace, but that is not going to be one of them. Just because you can pull that trick off and keep Maou safe, doesn’t mean that’s what you do. The people sacrificed to this point have been soldiers who decided to fight in the first place. Some sacrifices are needed, but you can’t throw away lives because you consider them less valuable. That girl has done nothing but work to change herself and was not given that ring by Maou to be a sacrificial pawn.

It just seems like nothing goes smoothly for that Older Sister though. She’s had mixed feelings all this time and now this. Was a serf on the run and had this chance to become more. But nothing lasts and I think she felt conflicted. Especially with hearing what the Head Maid has done for the serfs. She says something cold to them, but then goes and helps others freely? I still think it was because that was her way of trying to push them to become what she believed they could be, but not easy to be objective at all times. 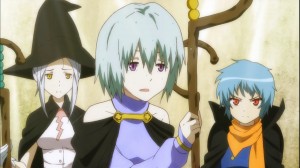 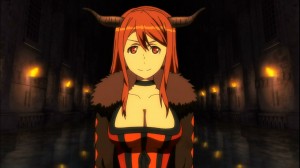 I feel bad for the younger sister as well. Things were really going well for that girl. She was improving her skills in cooking and was turning into quite the chef. Plus she was young enough that she wasn’t thinking too deeply about their situation and could just enjoy it. But even still, long as they are alive there is hope for things to improve. It’s just a matter of reaching that happy future once again.

I’m a bit worried about the Maou though. Why did she need to make that visit to the mage? That whole scene was confusing on a few levels anyways. Her situation doesn’t seem to be all that pleasant. Seems like the power of the former Maou’s are sealed away in her. Maybe that’s how the leader is decided, by whoever is holding onto that power at any given time. But it appears the seal has weakened and she has to go through some sort of process to restore it. When you leave a message to kill you if you come back not yourself….it’s not going to be a fun trip. Hopefully nothing insane happens…but I doubt things will go perfectly. 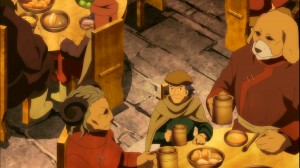 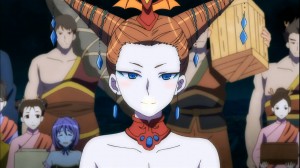 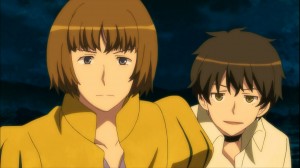 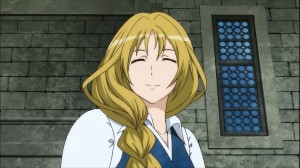 An interesting friendship between the Hero and Merchant. I swear for a moment I thought he was out to kill the guy. Teleporting in rapid succession and putting the guy through the ringer. But it was an occasion of opening up to him and I presume partially trying to divert his attention from Maou XD. Have him go after someone like the Dragon Princess, that would also help the Hero out. I suppose if they are bonding over…something it’s a good thing. It does show trust and frankly I think the Hero likes having someone he can be open about these things with. He has a small circle of friends after all. Plus it gives them someone to help make Gate City even more successful. That city is huge for the future at a representation for what they want to see for the entire world.

A pretty serious scene between the Knight and Hero as well. I’m still amazed about how far she has decided to go. It seemed obvious that the Hero and Maou would be together and that would be the end of the story. But the Knight still decided to take whatever role she can because she wants to be by his side. If it means him becoming her lord then that’s what she will go with. Sadly she has to be left behind this time, but her long term desire is clear. Even if be belongs to Maou, it doesn’t mean she can’t offer up what she has to the Hero. A pretty intense scene and frankly one that is going to have a long term impact on the Hero. There is no backing out of this XD. 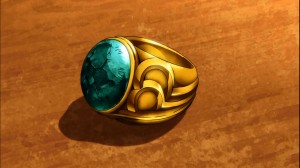 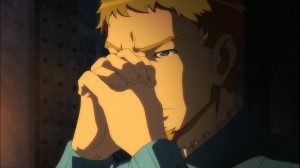 So, this episode was pretty massive. The plot is continuing to ramp up and who knows what will come from this event. There just is rarely a chance to catch ones breath before the next incident happens. Hopefully the Hero’s plan to let the Older Sister get captured and then rescued will go smoothly. That preview title has an especially important meaning for the Sister.
Score: A