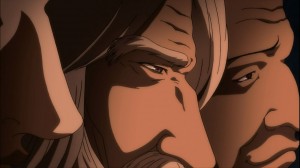 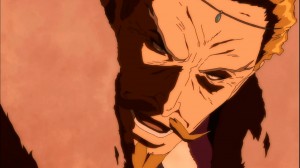 Well the good times never last long. This was an episode that focused on the positives gained to this point, but made clear that it’s a long road to peace. Every good move forward can have unintended consequences in the long term. It’s going to get pretty crazy soon enough and I wonder if they can find the way to peace.

The consequences of the last episodes have been interesting to see. I didn’t expect that failure of a general and the extremists pushing for the battle of Bright Island to join up. Though I suppose both are pretty ridiculous so they actually have some things in common. I just didn’t think they would end up teaming up like this. Goes to show that it’s hard to reach peace when there isn’t even a unified front for the humans or demons. I mean come on aiming for the Winter King’s money while the other guy just wants to get revenge on the demons who cost him his position. Neither of these guys has a clue about the long term problems of their actions and really couldn’t give a damn about things like that. It just is rough when you have Maou and the Hero struggling for peace while stupid people like this are going to take actions to put it all at risk. Though I will say that I felt somewhat bad for the idiot. Those guys can sit on their high horse and preach while in reality the nightmares being inflicted and soldiers getting attacked nightly by the Hero wasn’t anything to laugh at. Like those guys sitting on the sidelines preaching would last if the war came to their doorsteps. That group is another large threat to peace. Hard to reach peace when fools like that think they know everything. 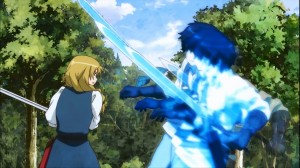 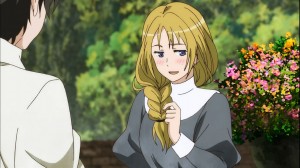 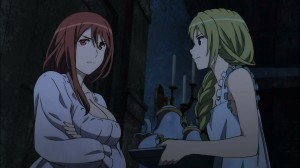 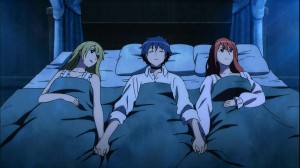 One positive thing is how hilarious this triangle between Maou/Hero/Knight is. I thought nothing would really happen, but it makes me wonder. It seems like the Knight is willing to aim for a role of mistress here if she can’t outright win the wife position. I suppose when you consider how powerful they all are, they could pretty much do whatever they want. Who would know really besides those closest to them? I respect the Knight’s tenacity in staying in this rivalry with Maou. Her feelings really are clear cut and obvious. Makes me wish them all the best though I really wonder how it will all work out.

I enjoyed the little duel between the Knight and Hero, though maybe calling it sparring would be more accurate. It just shows how utterly broken this guy is in combat ability. He can just magically jump around in a fight making him hard to catch up to and hit. I give credit for the Knight able to figure out where he’d be and get a sword in close, but of course in a real fight she really would be doomed. She could only come that far because she was fighting seriously while he was just goofing around. That guy really is overwhelmingly powerful.

It is nice how they are touching on the Hero having more to him than he thinks. The guy honestly does seem to doubt his own abilities in things other than fighting. But it was his efforts in Gate City that changed things there for the better. He might not be good with woman or suited for simple labor, but he does have a solid head on his shoulders. 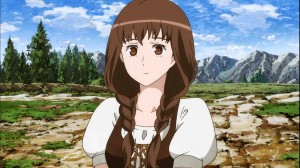 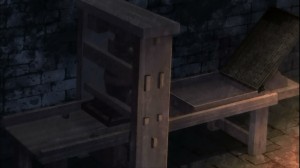 I knew the moment they talked about education they were going to reveal a printing press. It just seemed like the obvious step. It’s true that without the ability to mass produce information it is tough to educate and expand people’s horizons. Just shows how ahead of everyone Maou is right now. How many more incredible inventions does she have up her sleeves? It almost reaches the point of ridiculousness, but maybe that makes her suitable for the Hero. He’s insanely powerful and she’s insanely resourceful.

They have done a nice job making more use of the Older Sister. That girl does give a more normal perspective to events and kind of fills the role of someone moving up beyond their origins. That kind of classic dream of the normal person who starts in the lower class and raises themselves up to a business tycoon. She’s gotten the resources and education to take herself up to another level. From a girl who had no way out and no hopes, she now has almost unlimited potential. Maou really has a lot of faith in her as we can see. Out of anyone she chooses to take her along to see the printing press and has her take on the duty of acting as her double. It had to be someone smart enough to know what to say and see where things are going. With the Hero around she should be alright. 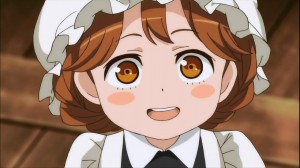 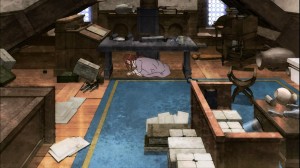 A nod to the Little Sister as well. That girl showing her own resourcefulness. Perhaps a talented cook of the future. Though I might be wrong…but did that girl just invent soft drinks XD? This age is almost getting too many leaps forward and I wonder if it will face a backlash from all the changes happening at once.

Oh and a minor thing…the Maou is making earthquakes happen! I have no idea what is going on there. It seems like she really needs to return before her presence destroys that entire region. There is clearly a lot more to being the Maou than I thought. Appears like she’ll have to go somewhere to endure the situation or stabilize her body. Hopefully that all goes smoothly and she is back before anything too crazy goes down. Still, it makes me wonder about her. Both about her past and what it means to be the Maou. 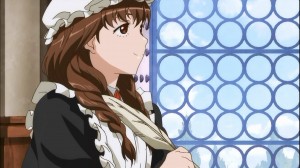 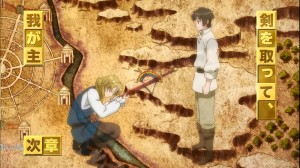 While things are looking good, I can’t help but be unsure about the future. There are people in the background ready to cause trouble and the war could ignite at any time. Hopefully whatever happens can be handled by the Older Sister, Knight, and the Hero. They have to hang in there or else all the sacrifices made to this point will have been for nothing. They can’t stop until they reach the peace they have been searching for.
Score: A-