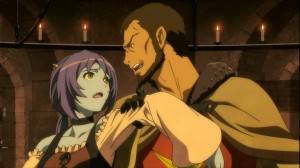 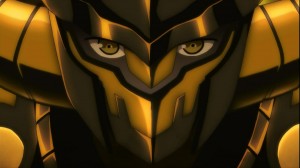 This is the episode I really needed to see after last week. The Hero finally came back to see Maou and they had quite the entertaining encounter. It was important for them to have this talk in order to figure out their paths. They may not always be right beside each other as they fulfill their tasks, but they are in it together.

While I’m not a fan of disappearing for all that time, I can get that sometimes people need time to figure themselves out. Seeing the world during those travels and getting a fresh perspective on the relationship between humans and demons. No matter who wins the other side gets terrible treatment and the victimized are left with feelings of despair and anger. While he isn’t a novice to traveling I don’t think he ever really looked at the world like he is right now. This has been his chance to see just how messed up things are and how difficult it is to find a solution. 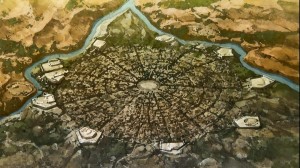 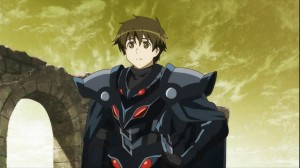 I think this journey was necessary because the Hero didn’t have a path before. He was just standing around while Maou worked through her plans and strategies. While he was an emotional support for her, he wasn’t doing anything. I think after this visit and having traveled so much he has found his role. The Hero can go around solving the problems that occasionally require a bit of force. There are a lot of lives he can help simply by being out there in the world and taking action. Dealing with Gate City is his current job and it’s one I’m sure he’ll figure out.

I do love in a sense how they touch on these classic, almost RPG skills the Hero has. He doesn’t even deny that he has some super attack that could annihilate that town if he wanted to. The guy is so insanely powerful that I almost think they could take a different route here. Just conquer the whole freaking planet and have this guy take down anyone whose causes trouble XD. But really, it shows how limited those powers are when you are really trying to make peace for everyone. He could wipe out that town, but what about the innocent people living there? The demons who while conquered are still trying their hardest to live and find a place in the world. For the sake of people like that demon girl, he has to find a better way. On that note, it is amazing how popular this guy is in the demon world. Everywhere he goes, has some girls flocking to him XD. Good thing Maou got that contract made, she’ll need it. 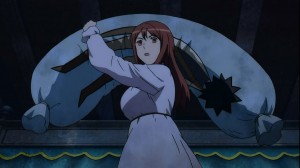 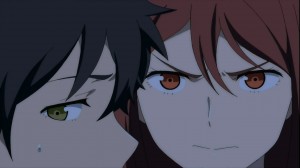 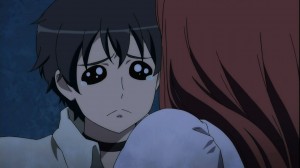 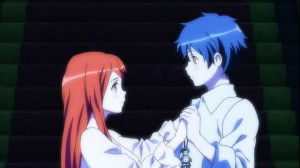 Of course the highlight was Maou and the Hero meeting again. What other way would you expect him to show up than randomly popping in and saying “hey.” Not at all surprised she started beating him with the Hero pillow XD. He completely had that coming after not actually showing his face for all this time. Sure, he at least sent letters to prove he was still alive, but that wasn’t much. Plus….he really doesn’t have great penmanship. It was more like he sent her picture books of his adventures XD.

I just had fun watching this conversation. Had the Maou understandably venting, the Hero with that silly puppy dog expression, followed by really weak name calling. Flabby Maou vs. Idiot Hero. Of course it was really set off when he started to list off all the women he’s been helping out XD. Apparently there are a lot of damsels in distress in the demon lands, XD. I just couldn’t help laughing at a certain point. Maou countering the flabby claims by talking about her very busy schedule of calisthenics. Luckily the dance distracted them or we might have had some real insults being used.

It all ended on a nice note with the Hero and Maou dancing and patching things up. That guy really doesn’t mind abusing his teleportation magic when it suits him. I’m glad they had that moment since quite frankly it has been a year in the story since they met. Of course the music cut out before they got their kiss as the universe stands in their way in that respect. What that meeting did do though was give Maou the courage to continue moving forward with her plans. Sadly there is no escaping that blood is going to be shed no matter what they do here. All she can do is step down on the pedal and keep doing what she can. They have come too far to stop here. 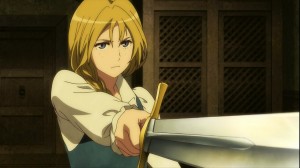 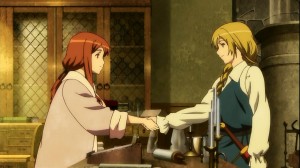 I liked that conversation between Maou and the Knight. It figures that she’s known about the Maou’s identity for quite some time. Makes sense because the Hero just couldn’t leave the Maou to go on this trip without some protection. Tell the Knight everything so she can step in and protect her when needed. In the end it’s all about trust. The Hero and Knight trust each other enough to say things that would be downright shocking to some people. She is right that there are different kinds of bonds. While I know she isn’t going to win a romantic battle, there will always be a bond of friendship, trust, and as comrades. Just nice that Maou and the Knight managed to confirm their friendship before going their own ways here.

There is a lot of danger coming though. The Knight is going back to the front lines to help with this next attack. The Prince of the Winter Kingdom lost his father and now has to carry on. It’s reckless to try and retake the island again, but I see why he’s doing it. For the sake of his father and even for the Hero in a sense. They put all their hopes onto one person to fight and end the war. As far as they know he’s dead or injured somewhere. I can understand the will to try and do something instead of leaving it up to others. At least this new King is smart enough to know that he needs intelligent people to help him. There’s no chance to win unless you have a strategy. Sending out 200 ships into monster filled waters is not a strategy, it is suicide. 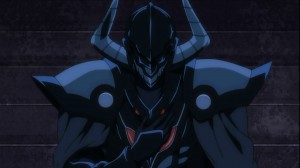 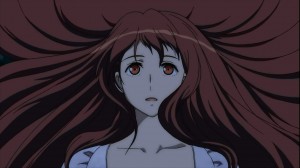 So now the story continues to advance. It’s a slow process to try and end the war so I expect more time-skips to come. I do wonder how the Hero will solve the problems in Gate City and just how this second battle to retake Bright Light Island will go.
Score: A