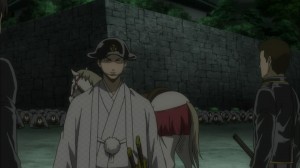 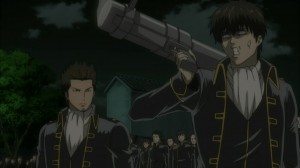 Round two! With perhaps the most powerful arc of Gintama yet firing on all cylinders, its a pleasure once again to re-iterate: If you’re not watching Gintama these days and are a fan of the series or just Shounen in general, then you are truly missing out. With the origins of its main character and hero Gintoki laid bare, at least to a decent degree, this series continue to shock, surprise and awe.

Picking up from last episode, Gintoki was down for the count, but the Mimawari-gumi and the Shinsengumi both stormed the palace. I had honestly thought that everyone was actually rebelling against the old Shogun, but of course the whole thing was given legitamecy by the current Shogun’s order. 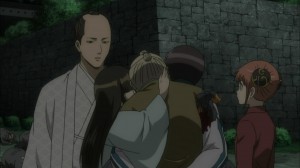 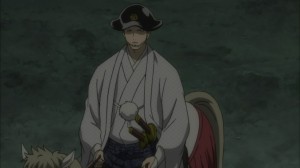 The Shogun, thus far, has been nothing short of the butt of some of Gintama’s funniest joke episodes. It was nice, therefore, to see him actually act like a ruler and bring together all the forces in Edo against his Uncle. It only truly made sense that it was the Shogun that brought together such opposing forces such as the Shinsengumi and Mimawarigumi. And while I’ll give the Shogun credit where he’s earned it, I personally think its not just him.

About 40 percent of the credit goes to Gintoki, and how he’s both developed his relationships with various power players in Edo, but also how he’s achieved some truly miraculous victories in the past. I don’t doubt that the Shinsengumi and Mimawarigumi would’ve come together under the Shogun’s order, but not with such finese and clock work teamwork. It’s because Gintoki’s leading the charge, that everyone’s banding together and doing their best to support him.

As usual, the dialogue in Gintama was its usual sharp and extremely odd self. I think its really a testament to Sorachi-sensei’s skill as a writer, that every character’s dialogue and action are colored by the very core of their personality. 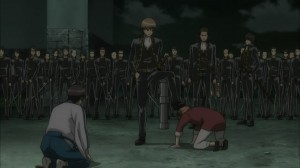 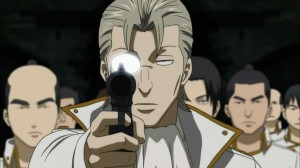 Whether it’s Okita proclaiming his whole: “I’d rather be animal than a dog wagging its tail infront of a pig” while stepping on Kagura, or whether it was good old Sasaki giving Gintoki both a mental and physical pick me up shot. The power in their dialogue, the humor and the depth of their personality shown in their dialogue, is something only Gintama can do, both with its exceptional Seiyuu and its exceptional Mangaka.

And Of course, the buildup to Gintoki’s rematch with Oboro was awesome. The reveal of the Shogun as the man behind the attack definitely stole the show, but the reveal of Oboro as the Yatagarasu was also a big one. We’ve heard peeps of the Yatagarasu constantly throughout the series, and now we finally know that it is Oboro that is that person. Fittingly so, as I suspect the rebellion ended in so small part because of his efforts on the battle feild, including defeating Gintoki as the White Yakasha. 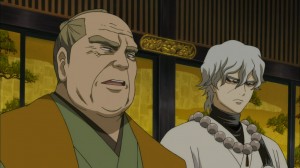 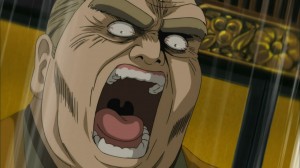 I must admit, If there was one thing I felt a bit lacking, it was the explanation or development of the previous Shogun, Sadasada. For Gintama, a series that so expertly develops its characters and even more so, its villains, it was kind of disappointing to see the previous Shogun was a pretty cliche dictator archtype villain. There is development to be sure, and there are the classic signs of a good villain. Sasada, despite whatever crap he’s done to his country, feels in his mind, that he’s been protecting it and doing the right thing, just like most egomaniacs do.

Its Oboro, afterall, that reveals that Sasada was protecting himself, not the country. In theory, I get the idea, and I could probably infer a plethora of reasons that would support the idea, yet… I’d have liked to know more about Sasada’s thinking and actions that pretty much shaped Gintama’s fictional version of Edo. I normally would be content, hell, pleased with how Sasada, even as he’s pretty much lost everything, decides to wipe out the happiness of two oridinary people who have already suffered for so long, yet I suppose I expected a bit more, since it IS Gintama.

Of course, while Sasada in his mind is having himself escorted to Yoshiwara to kill an old woman, Gintoki, Tsukuyo and Nobume have other plans XD. 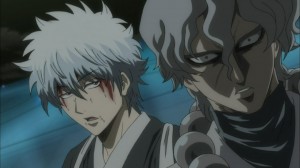 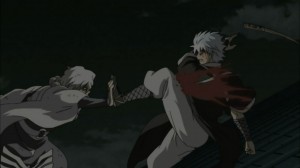 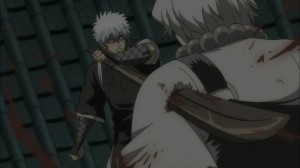 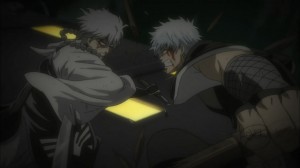 The rematch between Oboro and Gintoki was just… Awesome, breathtaking and jaw dropping. As someone who watches a lot of Shounen and action Anime, I was still blown away by the fight. Gintoki, as battered and destroyed as he was, still not only outclasses Oboro in the art of stealth attacks, but the final scene with them falling downwards was just… wow. 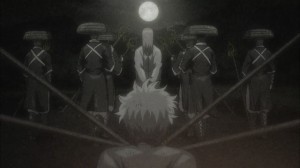 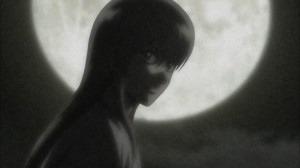 We also finally saw the face of Gintoki’s teacher, who’s final words are what informed his character. Shoyo’s final request to Gintoki, the one to protect all his friends, is the corner stone of Gintoki’s character. Its the one that Gintoki NEVER goes against, its the one principle that defines him. The fact that its developed here, and given such a powerful backstory is definitely storytelling at its best. 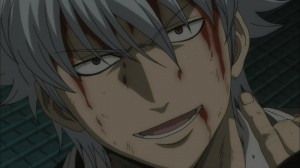 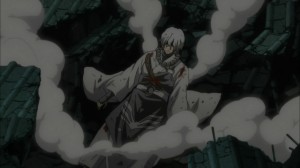 The final moment of course, with Gintoki using his broken sword, to impale Oboro, was a pretty intense scene. Not something I’ve seen too often from Gintama, but I definitely think its something that’s appropriate for a villain like Oboro. Not only did Gintoki have to resort the most extreme of measures to take him down, but the anime itself had to as well. 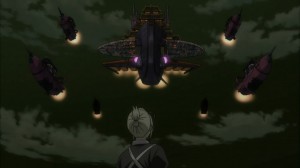 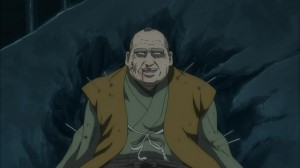 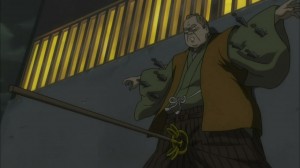 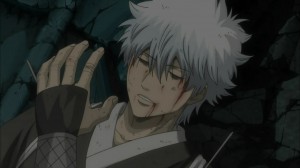 With Oboro defeated, Sadasada impaled with both Oboro’s poison needles and “nutured” by Tsukuyo (XD), this arc looks to be wrapping up. The one isuse, of course, is the huge fleet of ships descending upon Earth, so the battle isn’t exactly over? Maybe that is the part where Katsura, Takasugi and Sakamoto can make their appearance and wrap up things up?

Either way, I’m curious to see how this big event wraps up, and what changes it brings to the status quo. Not only that, I’m sure we’ll all curious about whether Gramps and Suzuran will get their happy ending. 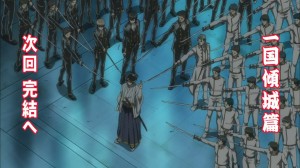 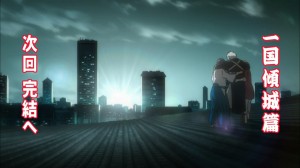 Seems like the Shogun is going to pull some kind of sacrifice plan to save Edo from an Amanto invasion. The ending of this awesome arc happens next week!