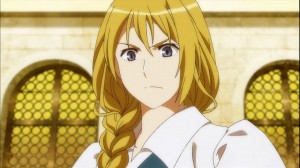 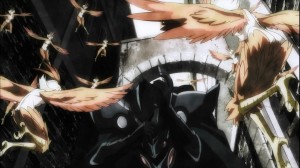 I suppose for a moment I forgot what kind of series this was and expected a bit of action to occur this episode. In the end it really isn’t a series to expect much visual action. While the war is an ever imposing actor in the world, the goal is still to end it. We did get a nice amount of character development from the Hero, Maou, the Maid Girl, etc. Even things with the Merchants didn’t devolve into chaos and battles like I thought it might.

Of course that’s a good thing since more fighting really wouldn’t really let them reach the goal. Things did get tense at times, but never quite crossed the line into all out fighting. Well the Hero has been fighting to be fair, but the most we saw from that was just some still flashes. I wouldn’t turn down a bit of action just to see how powerful this Hero really is, but if it’s not going down that’s not a huge deal either. 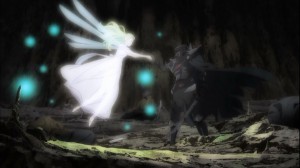 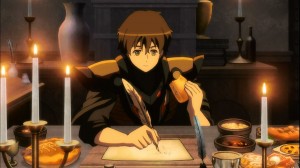 It is funny to see the Hero hiding around the mansion like that. When you think about it, the idea of him not being around in 6 months is ridiculous. The guy can literally teleport wherever he wants at a moment’s notice. He could do whatever is needed and then still make it back in time for dinner XD. Luckily it doesn’t appear like Maou has realized that or she’d really think he was avoiding her. Though possible she has thought of that option and has just tried to ignore it.

I did like hearing the Hero voicing his feelings on what has happened. You can feel that sense of uselessness that he was going through. He had to think that somehow his power and skills would be needed to end this war. Maybe not a full out battle against one enemy, but somehow he’d be useful in that way. Makes sense since why bother waiting and making a deal with a Hero like that if you don’t need his skills? But everything Maou is doing is aiming for a peaceful conclusion. They are making deals, introducing inventions, and slowly building up a food supply that can keep the countries from starving. None of that requires the skill and power of a Hero. 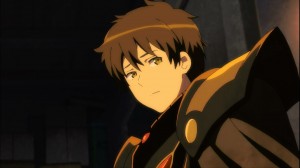 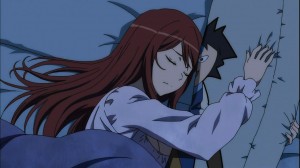 I wouldn’t be surprised if he had long found the mage girl and settled things. Though they only mentioned that in a letter they’d reported her location. It’s probably been easier for him going around the demon world resolving various problems. Fighting out of control monsters and rebels is just something he’s suited for. It’s a whole lot easier than simply coming back to that house and dealing with things there. His problems aren’t just about fighting though. The building relationship between him and Maou and just imagining how she’d look when he dies someday. Things are getting serious in a respect and that’s not easy for someone with his personality to face head on. The battles are a whole lot easier than emotions.

Though it’s not like staying away with resolve anything. The longer he stays out in the demon world the more trouble he’s going to get into. He really has some hilarious encounters with girls XD. I’m pretty sure at this rate he’ll have dozens of proposals for marriage before he actually decides to go back and stay. 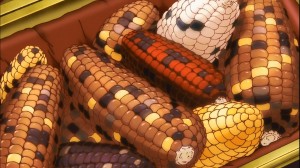 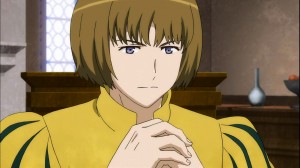 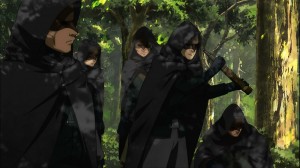 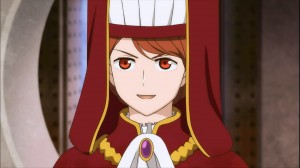 Not that the Hero is the only one getting marriage proposals though XD. I was rather surprised that a potential bloodbath turned into a proposal of marriage by the end. Despite the fact that the merchant seemed rather dangerous for a moment, things turned out alright. In the end Maou’s argument was pretty well done. The most important thing is being a merchant. All the pretense about the good reasons to be fighting aside, they are behind the war because it is profitable. Therefore if this plan is going to be profitable then he’ll just go ahead and support that. Not surprising that he doesn’t really care about the official reasons they are fighting the demons.

It had to be a shock though to hear what Maou’s plan actually was. Far more than just a compass or a new kind of food to produce, she had a massive plan to offer. A way to make use of a vast area that was not being used for much of anything. Anyone with knowledge about the benefits could definitely make a huge profit by taking advantage of this seemingly worthless territory. All Maou needed was to run into the right merchant who wouldn’t be blinded by “fighting for the sake of humanity.” It’s all about the money.

The marriage proposal was hilarious though. He really threw her off by the end. She really did her best to put that down despite being rather surprised. She won’t go and betray the Hero just because he isn’t around! 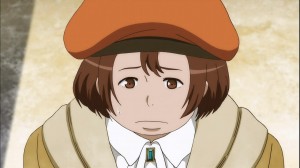 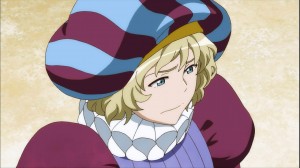 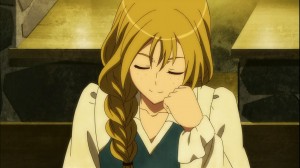 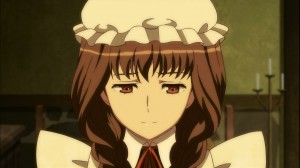 Things continue to be interesting for the Knight and Maid girl. I’m glad the Knight did her best to convince those three boys not to go off and fight. She knows they’ll certainly get themselves killed out there. With their positions their deaths could really hurt the lives of the people who are depending on them. Going off and getting killed in a pointless battle won’t help anything. The Knight might have been deflated afterwards, but think she did a good job there.

I have to agree that Maid girl is working up to Head Maid’s level. She really is getting good at hitting weak points and pointing out how people really feel about things. But at the same time she still isn’t sure that she’s become a human being yet. Her past is still hanging over her and just doing what she’s been doing doesn’t feel like its enough. It’s probably not a bad idea to try and get in some combat training herself. She has a little sister to protect and frankly who knows what will happen down the road. It’s not easy to change or in her own words “become human.” 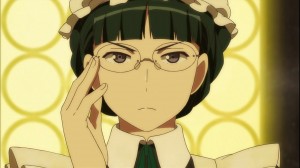 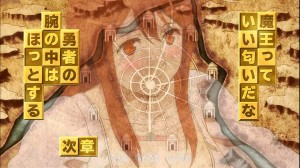 In the end, I enjoyed the episode. It set a lot up and developed quite a few characters. We’ll have to see how the upcoming battle on the demon captured island goes. That battle might shake some things up no matter how it goes. At the very least the loss of life will be pretty high and for little purpose. I feel for the ruler who is stuck having to send his soldier’s lives off for a battle he knows is utterly pointless. Sacrificing soldiers just so they can keep this war going and receive needed food supplies. It’s got to be a horrible position to be in.
Score: A