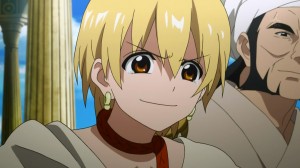 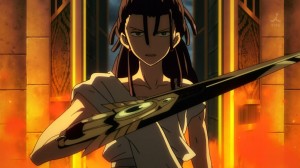 Well things certainly went downhill in a hurry. Forces behind the scenes certainly helped to manipulate the situation and give Kassim the chance to take action. There doesn’t seem to be much of a future for Kassim in particular as this Balbadd arc races towards a conclusion. Things are finally picking up with Aladdin as well, hopefully this means he’ll start getting the answers he’s been searching for all this time.

Unfortunately this might be goodbye for Ugo. It seems like he used everything he had in that fight against Judal. So it wasn’t that Ugo was Aladdin’s Djinn, but rather he was using the magoi gave to him by Solomon. He was purely acting as Aladdin’s friend and thus no matter how much power he poured into that flute there was no going back. It was nice though that we got to hear from him for once and not just using hand gestures. If this is the end, it was nice knowing you Ugo. A pretty cool guy when you get to talk to his head. 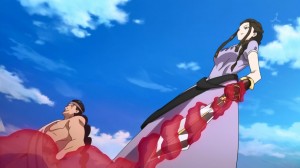 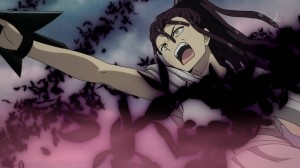 I really wonder if Kassim ever understood what the heck he was doing. His bold speech in the plaza frankly just sounded like a spoiled brat who was just angry at everyone. For all the fuss he was making, was there any point to it at all? The monarchy certainly committed many crimes against the people and you can’t get back what has been lost. But does it make any sense to start a civil war when the enemy you are fighting no longer exists? It’s as pointless as declaring war on the ocean. Frankly, I’m glad they had them using brainwashing fog since anything less would be sad. It would be terrible if people were legitimately moved by Kassim’s words.

It just made everything that happened next all the more tragic. All the people dying right now are dying for no reason. Nothing at all can be gained from this. Even worse if they completely self-destruct from this civil war then it would give the Kou Empire an excuse to take Balbadd by military force. If the country falls apart before the Republic is born then it obviously can’t join Sinbad’s alliance. No matter what Alibaba and company have got to stabilize this situation and get everything under control. Before more lives are lost for no reason at all. 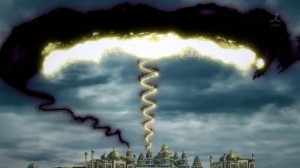 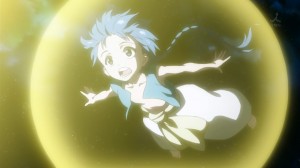 Makes sense to say that the flow of fate is going in reverse. Someone like Kassim is just looking backwards the entire time. All the pain and suffering they experienced in the past is completely ruling them now in the present. There are definitely some forces at work that are acting to make a mess of things. The alliance of this mysterious weapons dealer is up in the air. It feels like this goes well beyond the Kou Empire. There seems to be a goal to really mess up the world and they are using people in order to accomplish that.

Aladdin needs to hurry up with his history lesson and get out there. Hopefully the information he gains will pay off and build up his strength. His inability to stand against Judal was due to his lack of knowledge. He doesn’t understand his own power or magic particularly well. Maybe what he gains here will let him truly stand up as a Magi and help Alibaba out. 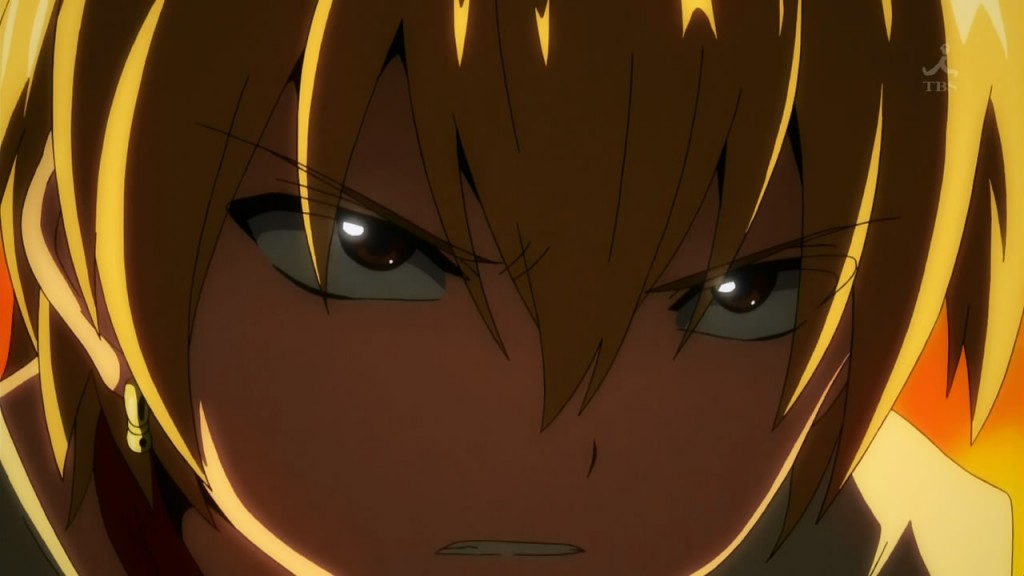 Time to get serious

I’m not surprised that Alibaba hesitated to finish Kassim off. He might be an idiot and a terrible human being, but there is that history. No matter how much he is betrayed there is no way that Alibaba can truly hate Kassim. He’s just too soft-hearted of a guy to go that far. Unfortunately though he’s not going to be able to walk away from killing Kassim a second time. Right now he’s the only one who can legitimately fight against the monster that Kassim has become. No matter how painful he has to swallow it and take a stand. Hopefully Aladdin arrives in time to help him out. At least Morgiana is still around and able to fight, but this could get messy in a hurry.

It was fun though to watch Alibaba just chop up those stupid weapons. You don’t mess with the sword of Amon. That thing will cut up anything that gets in its way. It’s just a question of how much magoi Alibaba has right now. It’s not like he’s going to have much time to take a break and rest. 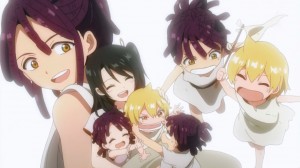 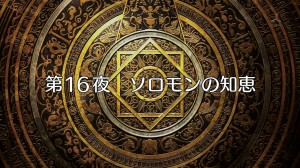 Now that Kassim has turned into that monster it appears the final battle of this arc is here. Unless Kassim is stopped there’s no telling how much damage might result from this. The next episode should be pretty fun to watch in terms of action. Though there’s a good chance the middle might be slowed up by whatever lessons Aladdin is going to go through. Hopefully he can take the quick route since he’s a bit low on time.
Score: A-