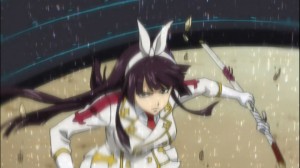 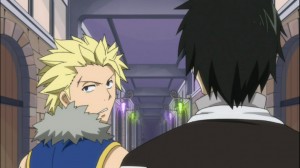 Fairy Tail continues to go into new and rather uncomfortably dark territory with this arc. While the whole issue of an episode laden with fanservice that clearly pandered to the audience and fetishised its characters was upsetting and uncomfortable to watch, with episode 165, Fairy Tail has gone to a different, and slightly darker place. Its easy to forget that we’re watching a shounen series here, because some of the stuff that has happened in this show clearly belongs in a senin kind of show.

I am of course, referring to the rather disgusting treatment of Yukino by her guild master after she lost her match to Kagura. The match with Kagura was actually pretty good, though I feel I would’ve cared more about it had I known about Kagura’s backstory before hand. 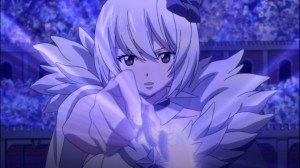 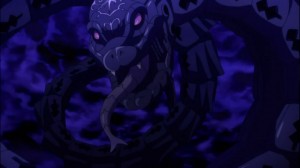 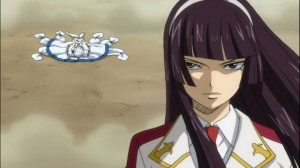 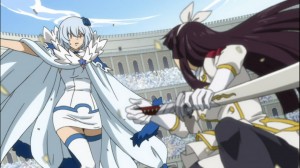 In any case, it turns out that Yukino is another Celestial mage. Not only that, however, it seems she has the final two Zodiac keys, as well as a hidden thirteenth key that no one knew about. The battle between her and Kagura seemed rather one sided at first. I was actually fairly sure that Sabertooth would have another overly dominated win. Yet, much to I think everyone’s surprise, Kagura, the strongest of Mermaid Heel, was able to defeat the thirteenth spirit without even unsheathing her sword.

And while I expected Sabertooth to be unhappy with her defeat, what happened to Yukino was beyond disgusting. So… The Guild Master for Sabertooth did what I think no living person should do, let alone a leader. He had Yukino strip naked in front of everyone, and then remove her Guild mark herself. Calling it public humiliation would be horribly horribly understating things, as it was more akin to rape, and not something I really wanted to see in a show like Fairy Tail. 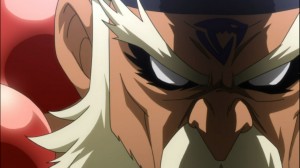 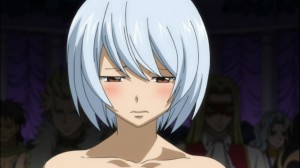 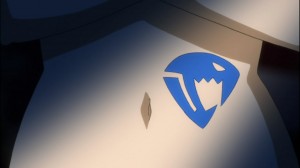 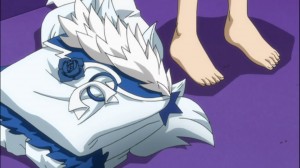 This kind of tactic, the kind where someone is made to look evil by doing despicable acts like this, is used by writers a lot in literature and entertainment. To truly make viewers hate someone, I get that some truly despicable acts need to be done by the villains, but this was a bit too far, especially for a shounen series. Yes, I guess this move did make me hate Sabertooth’s master quite a bit, but I also lost a bit of respect for Mashima-sensei as well. I love his work and I love Fairy Tail, which is why its exceedingly disappointing when this sort of stuff happens.

I do have to admit, I was extremely happy to see Natsu rush in and attack the entirety of Sabertooth. It was surprising, and damn ballsy, but its also why I love Natsu. He doesn’t care for the concequences, after hearing of what happened to Yukino, he goes to her guild and challenges her guild master, even though he barely knows her. That, is definitely the quality that I love about the character, and one that really made my distaste for this episode fade, if only a little bit. 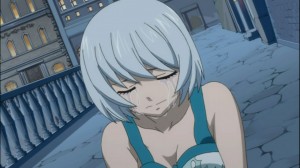 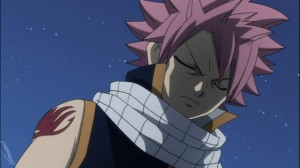 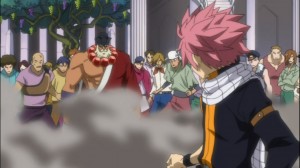 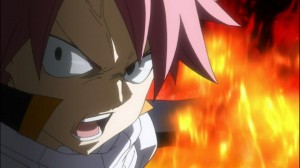 I think its a nice wake up call for the rest of Sabertooth, who clearly are just as at fault as their guild master, as they stood idly by and let him do as he pleased. I am seriously rooting for Natsu to beat the crap out of him, and I’m really eager to see how Natsu’s little outburst and attack will go. 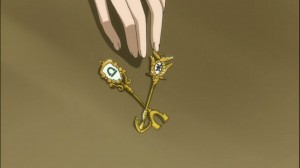 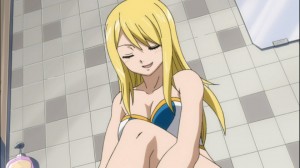 And while Yukino’s issue took center stage in these two episodes, we did also get some advancement on the whole eclipse plan. Seems like 12 Zodiac keys can, together, open “a gate that will change the world”. Seems the Eclipse plan is based on this old legend that Yukino tells Lucy when she goes to see her. And again, I was glad to see Lucy not accepting the two keys, as it was undoubtedly, the right thing to do.

On the Erza side of things, we got an interesting little development that I’m truly not sure what to make of yet. Erza runs into her old friend Milliana. Milliana was another one of the people that was used by Jellal waaay back in the Tower of Heaven arc. Unlike Erza or even Simon, however, what was interesting was that Milliana not only hasn’t forgiven Jellal, but she hates him. The hate goes as far as being her purpose for living it seems, as she even joined Kagura’s guild, Mermaid heel because of her hate. 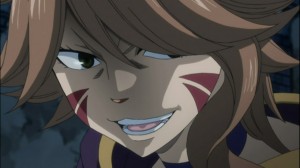 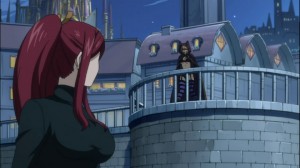 It was unexpected to say the least, to learn that Kagura’s sword is actually meant to kill Jellal, which puts Erza in a rather sad position. She’s caught in the middle of a blood feud between two of her friends, one of which she’s in love with. I’m not sure how this is going to turn out, but I think its double lucky that Jellal didn’t blow his cover as Mystogan in the tournament. The entirity of Mermaid heel would be at his throat, not to mention the mental pain he’d feel after running into Milliana. 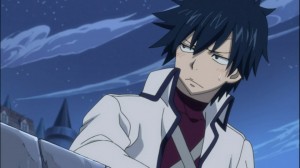 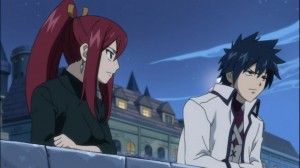 Finally, I’ll close up by talking about Erza’s little conversation with Gray. Maaan… Did Erza really hit the nail on the head with Gray. “Why don’t you give her a clear-cut answer?”. YES! YES! YES! Thank GOD! While I’m beyond a bit sad that she didn’t pursue it, at least it was given attention to. Maybe that’s about all the romantic development we’ll get in a shounen series, but I honestly wouldn’t mind it if even Gray at least, stopped beating around the bush and honestly answered Juvia.

Overall, I think these were a strong couple of episodes, as the story got interesting for sure, but at the same time, the fact that Fairy Tail is starting to go into new and dark places kind of scares me. 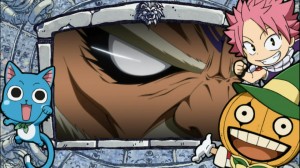 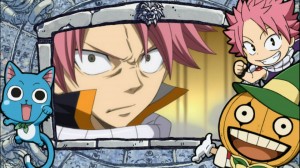 Next week, we get the conclusion to Natsu’s rampage against Sabertooth! I can’t wait! See you all next weeek!