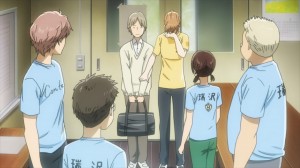 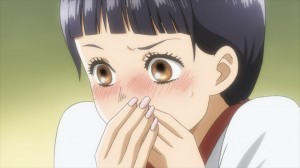 And with that, we wrap up the introduction of the new first year members, Tsukuba and Sumire. The new additions to an already strong cast of characters are somewhat of a mixed bag. If nothing else, they bring diversity and unique perspectives to an already diverse and lovable cast of characters. In a team of most likable people, its interesting to see how Sumire and Tsukuba fit in. 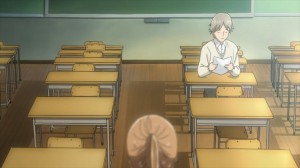 Tsukuba, the only first year left after Chihaya begins teaching the first years, is perhaps the more interesting of the two, at least in my eyes. If there was a word to describe Tsukuba, it would be ambitious and extremely competitive. Tsukuba seems to have been pretty good at another version of Karuta, second verse Karuta. The differences between that Karuta and the competitive version of Karuta we’ve been observing until now could not be more extreme. 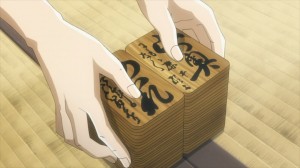 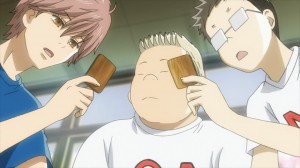 Unlike the elegant and dignified competitive version, second verse Karuta not only uses both hands but it also goes for roudy tapping and intimidation of your opponent. Seems that they do things differently over there in Hokkaido than they do in the mainland XD 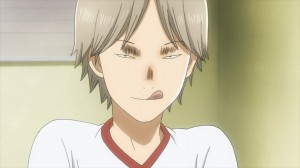 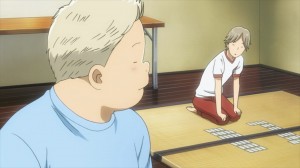 Of course, I think the one feature that truly sets Tsukuba apart from the rest of the cast is that he’s two faced, and somewhat in the clever/evil archetype. Its not bad at all, in fact, I find his differences in attitude and sudden changes in personality quite comical and entertaining. It was especially funny to see him reject both Tsutomu and Nishida’s instruction at first, only to be properly “put in his place” by Nishida. I think Nishida is probably in the best place to be bale to teach someone like Tsukuba anyway.

And while I believe that Tsukuba is a more entertaining character, I don’t think he’s the only one who will be an actual asset to Misuzawa’s Karuta Club. Despite my expressed dislike for Sumire in the previous post, I think she’ll actually make for an interesting addition to the cast. In many ways, I think Tsukuba and Sumire serve as a sort of counterbalance to all the eminating good that comes from the second years in the club. While the second years all have an odd quirk or two, they are more or less nice, likeable people both at their core and on the surface. Tsukuba and even more so Sumire, are the yin to the rest of the teams yang. They’re playing Karuta were less than noble reasons, and they’re not exactly what I’d call the nicest people around. 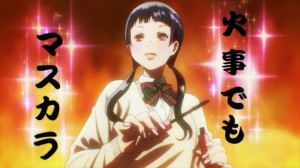 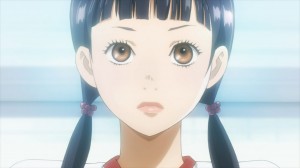 Yet, at their core, I’d say they’re not irredeemable. While many viewers will disagree with Sumire’s reasons for playing Karuta, which boil down to capturing the unattainable Taichi flag, its definitely worth admitting that her determination is something to admire. Sumire’s whole situation and her way of continuing to go after Taichi reminds me of another show that I loved to death, Suzuka.

For those who’ve seen it, you’ll remember that the main character Yamato falls for the track running Suzuka, and is determined to win her in whatever way possible. He starts running and track in order to get close to Suzuka, not because he loves the actual sport or wants to better himself. While there’s a huge difference in the situations and characters of both, I think Sumire is kind of in a similar situation to Yamato. 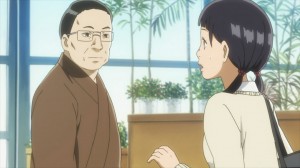 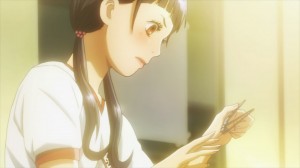 Much like Yamato, I’m sure Sumire will eventually end up finding a love of Karuta, even if she doesn’t get Taichi (As long as she steers clear of asking Haruda-sensei for an tangible advice XD). Chihaya definitely seems to think so, and quickly notices how happy Sumire is to finally get her first card. Luckily, Chihaya’s right on the mark, as Sumire ends up coming back and decides to seriously memorize all the 100 poems after embarrassing herself infront of Taichi and what not. I think the part where Sumire finally grew on me was when she clipped her nails, a sure symbolic sign of her determined resolve. 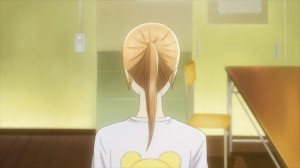 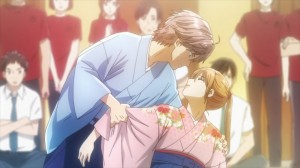 In terms of resolve, the reveal behind Chihaya’s undeterred resolve for new members got some added depth this week. While it would be easy to just leave Chihaya’s action to the reason of “She loves Karuta”, Chihayafuru goes a step further and calls back to perhaps the real reason behind her insistence to have more members; her collapse in the Nationals. Its no surprise that Chihaya would be thinking about how to prevent such an event from occuring again, and I think her positive actions of searching for more members rather than blaming herself speaks worlds about her character. 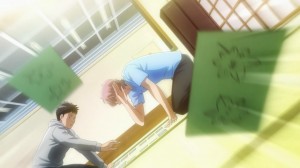 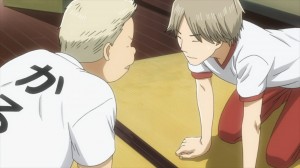 That reason, is also the thing that spurs everyone to help keep both Tsukuba and Sumire, despite how unlikable they might seem at first. With Nishida mentoring Tsukuba, Taichi working harder to get stronger, Chihaya being her usual self, And a growing comradery between Kana and Sumire, Chihayafuru has found new ways to make the team dynamic interesting and original yet again. All the more reason why a series like Chihayfuru is so exciting, even only two episodes into its second season!