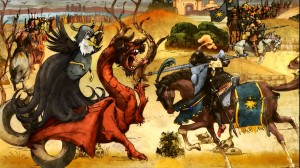 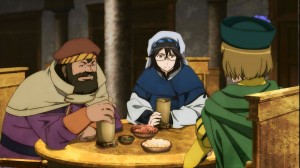 It isn’t often that a first episode has me thinking “I’m in,” but this would be one of them. This episode did a good job setting up the world and the conflict at hand. It certainly shows that the classic storyline about a hero racing off to slay the Demon King has some problems or at least it does in this case. This isn’t a situation where you can just go off and kill one person and everything instantly turns out for the better.

There certainly are a lot more problems to ending this kind of conflict than I expected from the start. It throws a lot out there like how the countries on the border to this conflict are getting the money needed to stay afloat. Sadly the war saved countries at the cost of the lives that are constantly being destroyed pointlessly. People fighting for their families and homes are being used to keep a system going in which their lives are just parts in the machine. The countries farther in the back can live in luxury because the war creates needs for goods that that they can ship out. All in all a pretty little system that allows the countries to avoid having to fix the deep problems that they actually have. 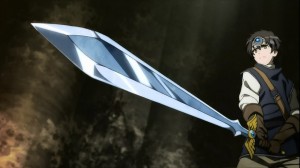 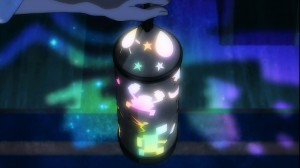 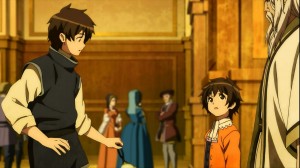 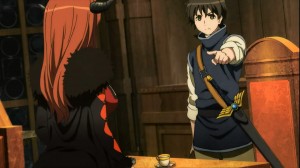 Not too much on the background of the main characters, but it’ll get to them eventually. At least know the hero came from an upper class background in the countries nice and safe from the front lines. Probably looked outside of his small peaceful world and saw how things were really quite bad. Just had the best of intentions going out there to save the world and bring peace to the people suffering. Unfortunately, the world isn’t that simple. Killing the Demon King won’t end the conflict. No matter what he did there he couldn’t end this war in one day. If he killed her then she’d simply be replaced and the Hero himself might be killed off secretly. Tell a grand tale of a hero who sacrificed himself to slay the evil Demon King. Or they might just cover it all up. Replace the Demon King so nothing changes there and simply have the Hero vanish.

Sadly, his efforts just turned into propaganda. He was allowed to go because it gave hope which would allow people to continue fighting in this conflict. The hope that one day another hero might rise up and end the war. Can certainly sympathize with how heavy all this information was. It all seemed simple until he had the facts in front of him and suddenly nothing was simple.

This really is the only route they have to achieve a lasting peace. Killing one person today won’t end it. But if he goes along and works with her then maybe they can find a way. Just means though that he’ll likely have to take a lot more lives before it is all said and done. 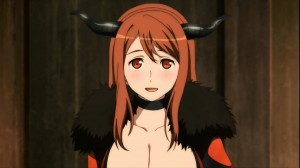 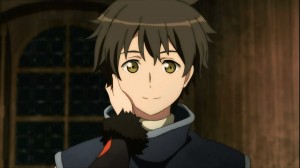 Now getting past the depressing stuff, there was more to this episode. Certainly the poor Hero’s drive to fight was killed rather quickly by the introductions. Honestly, that girl certainly did a fine job and clearly had prepared for this meeting. And no I don’t just mean the ‘preparation’ she did with that dummy XD. She certainly had the answers and managed to explain just what needed to be done.

A couple pretty entertaining leads at any rate. A Hero who while thrown off by this girl certainly is capable enough to help find a way to end the war. Just a plain energetic female lead with the Maou. For some reason convinced her flabby upper arm completely ruins her physical attractiveness….She pretty well threw out a full blown marriage proposal here which shows how serious she is about it. A desire much like a hero of wanting to see what is around the corner and a world without war. Not something she can do alone, but with help it might just be realized.

Visually I thought the first episode looked pretty good and if they just keep this level it should be a pretty good series. Of course have to see how they handle the battle portions, but at least the non-action side of the show looks to be in good hands. 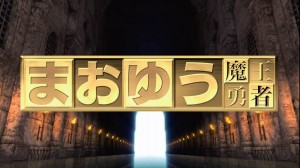 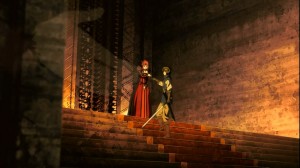 The OP certainly has a good song behind it. It keeps the energy up throughout and that’s not a bad thing.

Visually it sure shows off a lot of locales and characters who should come more into focus as the series goes along. It does just remind you how big the world is and the scope of the conflict the main characters are up against. 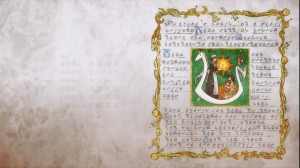 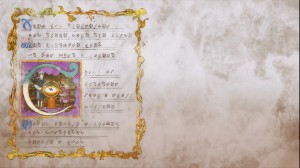 The ED was alright. It definitely slows things down focusing more on a softer tone of song. Visually just a series book pages/scrolls. Not sure how many times I may end up watching the ED though. Doesn’t have a lot to keep your focus with. 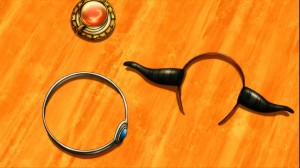 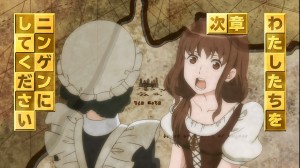 Overall, I’d say this was a good start to the series. Introduced the leads and the conflict that this world is dealing with. I think it should be a fun fantasy story to watch unfold. Things could certainly get complicated soon when the Hero meets up with members of his party that he left behind so he could charge the castle alone. So, this will be my series for the Winter season, now the only question being is how I address these characters. Since, somehow think it’d get rather uncomfortable to call the female lead Demon King for the whole series XD.
Score: A-