An anime that features the world of weapons, smugglers, the black market and weapon dealers. No, this isn’t actually Black Lagoon that’s being referred to, but rather a newer, edgier, mature and intellectual series, Jormungand. Jormungand is a story about a weapons dealer and her band of mercenaries, but calling it even remotely like Black Lagoon is making quite the serious mistake. If anything, Jormungand is Black Lagoon’s older, maturer and cleverer cousin, and one that marries suspense, action with politics, complex philosophies and extremely grounded, deep characters. Jormungand, which actually spans two seasons (The Original and the sequel Perfect Order) is a series that is entertaining, clever and unpredictable, in both a good and bad way. 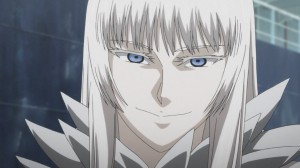 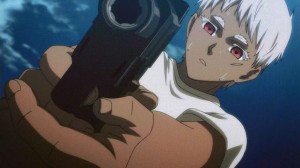 Jormungand is another adaption of a manga, but what makes it truly special is the fact that its a very faithful, to the T adaption. The story, has been painstakingly kept preserved and translated into the animated medium by director Keitarou Motonaga and Studio Whitefox. Jormungand is probably best classified as a Senin show, and while it does feature adult themes, extreme violence and what not, its hard to call it a series similar to anything else that’s present in the Senin category. Simply put, Jormungand is simply unique and special, in a category of its own.

The reason the series is so impressive, is definitely due to how deep and engrossing it is, on multiple levels. The story features a delicately intricate story that is woven together with individual disparaging plot points that all come together beautifully at the end. The story in Jormungand is always building up to something, and all the while,. its a roller coaster ride. There is a rather subtle and slowly built main story that the series slowly molds in the background, all the while letting the characters take the center stage. 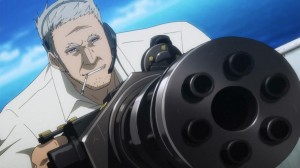 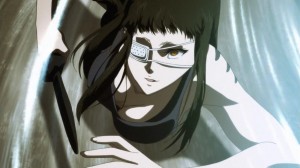 Most of Jormungand’s episodes are actually character-centric episodes. A great idea, as the character-centric episodes are also where the series and its creator Keitarou Takahashi excel at. Koko has a big staff underneath her, and it is extremely refreshing to see nearly everyone get a nice, deep story dedicated to them. There’s so much material to cover that it takes 24 episodes of well paced action, suspense, plot twists and amazing character moments to tell it all.

And of course, the reason Jormungand is able to succeed as a series is largely in part due to how well thought its characters are. If one were to attempt to really distill the characterization in this series down to its bare essence, it would be the conundrum of characters that are both relatable but extremely over the top and eccentric. Its a feat that hasn’t been accomplished by many series, but its also a feat that in recent memory only Jormungand has been able to accomplish so well. The best way to understand the brilliance of the series character creation is to imagine a eccentric, unqiue or comically interesting friend. The kind that you just end up describing as “a character”. Now imagine an entire room filled with people like that who play off of one another without becoming grating and you get somewhat close to the idea of how awesome Jormungand’s characters are. 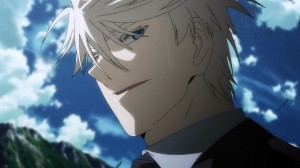 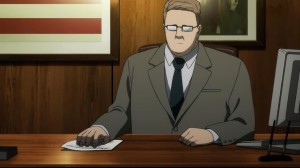 A large part of the credit for that, has to obviously go to the seiyuu playing these characters. With extremely talented seiyuu like  Shizuka Itou (Koko Hekmatyr), Mutsumi Tamura (Johan), Unsho Ishizuka (Lehm) and Sayaka Oohara (Valmer) working their magic, the characters manage to keep the delicate balance between believable and over the top entertaining. Even side supporting characters like Kasper Hekmatyr and George Black “Bookman” are brought to life by stellar performances by Masaya Matsukaze and Tsutomu Isobe. These are just a few examples of the exemplary voice work present in this series.

And while this review continues to sing praises for the characters and the character-centric story, its hard to truly call Jormungand’s story perfect. There is the small issue of one of the main characters in the cast, Lehm not actually getting a character centric episode of his own. Fans of the character will definitely feel this as the series draws to a close.

The big issue, or flaw perhaps, however, with Jormungand is in how it ends. Unlike most series these days, Jormungand actually completes its story the way it was told in the manga, although the payoff for viewers is far from satisfactory, depending on what kind of viewer you are. For those who can appreciate the kind of ending that hints at a resolution but leaves it up to your imagination, Jormungand is pretty good. For those who actually want an actual ending spelled out for them, that final conclusive moment that would make Jormungand’s story complete and perfect, you’ll end up being left wanting. Jorumangand goes for an ending that ends at the critical moment that the series has been building up to, and then refuses to show the resolution. 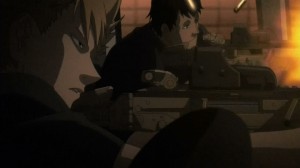 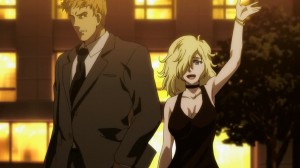 And while the ending doesn’t achieve the same level of greatness that this series consistently delivers on an episode per episode basis, its hard to find the ending bad enough to make the entire journey miserable. Hardly a deal breaker, the ending for Jormungand is what prevents it from truly achieving greatness.

Certainly from the production side of things, things are well done. The action scenes and explosions are expertly animated, and the art direction is definitely in the same vein as Studio “P.A Works’s” CANAAN. The gun fights in this series are exceedingly impressive, with a wide variance of all out brawls, urban warfare, car chases and even mountain and forest guerrilla warfare. There’s a nice variance of locale as many parts of the world are shown in this series, and each country is done justice. Overall, while this isn’t a series that people will remember for its animation or art, its worth noting that the art and animation do a great job of servicing the characters and story.

The sound is also extremely well done, with an odd techno/trance OST that works to truly exemplify a “modern, technology” based story. The OST is complimented by some truly well done OP/ED Themes for both seasons. 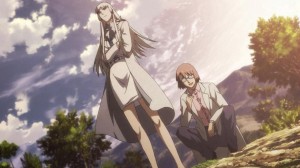 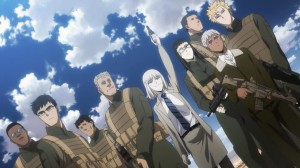 To summarize, Jormungand is a great if slightly imperfect series. Anyone who is a fan of serious, intelligent and political themed stories will find this Anime series to be a real treat. Its clever, full of wit and tons of suspense and action. If not for an ending that can’t match the quality of the overall package, Jormungand would be perfect. It isn’t perfect, but Jormungand gets a heartfelt recommendation from Anime Evo and a well deserved A Grade.