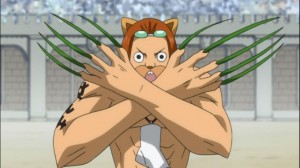 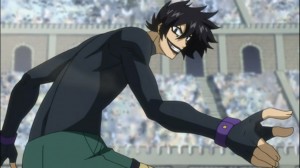 Finally, we see some progress from Fairy Tail as they attempt to establish themselves as the number one Guild in Fiore. Until recently, Fairy Tail has been stuck in last place, but things seems to be finally looking up, if only by a really small amount.

I have to say I’m glad I’m done with this past semester. Calling it my life’s most stressful and difficult semester is an understatement. But now its done, and I’m recovered from the extreme fatigue I’ve had as a result of it. Anime Evo should start getting regular updates from me, and the first and foremost is to be blogging Fairy Tail every week, on time from now on.

Now then, these last two episodes were actually pretty interesting. I wouldn’t call them the best episodes I’ve ever seen, but this arc in general is just good stuff all around.

Episode 161, Chariot, primarily focused on bringing Natsu and Gajeel toe to toe with Sting from Sabertooth. I have to admit, the race was kind of dissappointing, even if it was funny. Seems the whole motion sickness thing has become a common theme with all Dragon Slayers now, something that I’m not entirely convinced needed to happen. 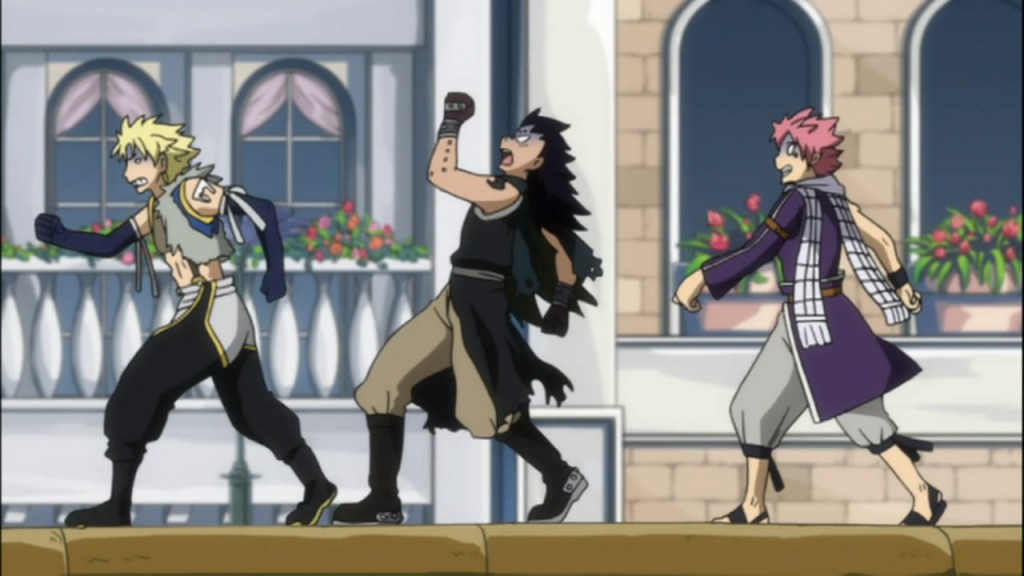 While Gajeel kept wondering why he suddenly developed motion sickness, no real clear answer was given. The motion sickness thing used to be a totally Natsu thing, and I didn’t see the reason to just have every Dragon Slayer, from Natsu to Sting to even Laxus have that problem. Its funny yes, and a bit of a trade off as well, but its gone from being a character quirk to an actual “weakness” that all Dragon Slayers have.

Still the whole race between Natsu, Gajeel and Sting, where they were all in last place did give Natsu the chance for another cool speach. And damn! Natsu seems to be really hitting these motivational speeches out of the park lately. It totally made sense that the real reason the returning members of Fairy Tail are trying so hard is for the people they unintentionally left behind. 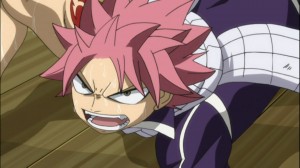 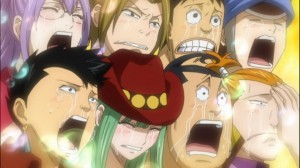 I definitely felt that it was a touching moment, and It was nice to see Natsu actually “kind of” keep his promise, even if he did come in 3rd last. Like I said, there’s progress happening for Fairy Tail, but its just a rather tiny amount.

We also got clued into what Carla’s actual prediction/prophecy was. It was interesting to note that it was actually “different” from what we heard an episode ago. The vision in  fact, showed the royal palace crumbling and Lucy “singing” as it did happen. 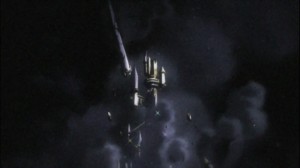 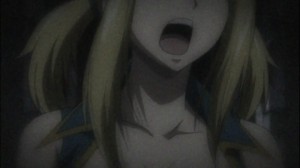 Regardless, Carla decided to ignore her premonition, and not tell Lucy when she came to visit Natsu, who was still passed out from Motion sickness. 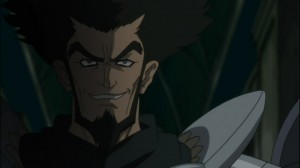 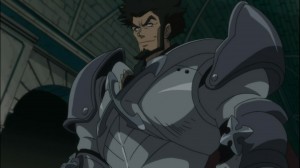 I’ll comment on the whole “Eclipse Project” Plan that seems to be brewing here. I think its interesting to note that the Captain of the Gaurd is actually playing up the differences between Fairy Tail and Raven Tail to his advantage and actually trying to kidnap Lucy. Man… these Celestial mages are pretty darn useful aren’t they? Seems every end of the world plot requires them in some way or the other. XD

And then we proceeded to the rather uninteresting battle between “Toby” and “BlackSnake”. Honestly, I wasn’t too surprised by the outome, as Raven Tail does seem to be able to hold its own bar the occasional weakling like Claire. What I was surprised with, was a sort of mutual respect echoing between Toby and BlackSnake, and their whole bet and everything seemed to be between two equals. That, of course, was pretty much thrown out the window over Toby” stupid sock joke, that became “an evil” act BlackSnake. 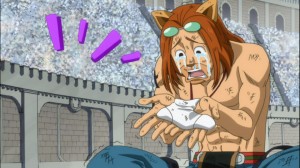 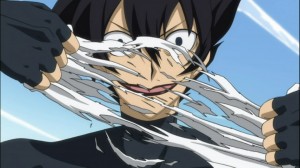 Listen… I get it, Raven Tail is bad, but wasn’t there a better way to show this? This was straight up silliness, coupled with (As Gaurdian Enzo from LiA would often say) Mustache twirling villainy. The way BlackSnake was protrayed was a bit too cartoony and stupid, even for Fairy Tail. So he ripped a Sock, the same Sock that Toby couldn’t find for a few months because he was dumb enough to hang it around his neck? Honestly, at that point “Limbo” deserved to be slapped for his stupidity. The whole affair reeked of stupidity, and no, it wasn’t so stupid that it was funny either… 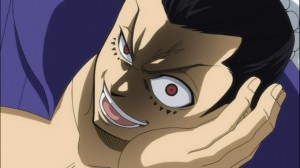 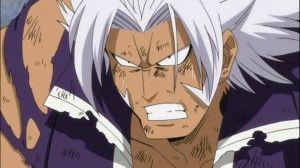 The conclusion of the fight bled right into episode 162. The focus of which, was the battle between Elfman and Bacchus. I’ll say this, I was never a big fan of the Bacchus character, but it was satisfying to see Elfman actually beat him and win one for the team. For the longest time, I’ve seen Elfman as all talk and no walk, and if there is one thing that I’ve loved about this arc, its totally given Elfman a makeover and made him cool.

Perseverance and tenacity was the name of the game in Elfman’s battle with Bacchus, who was known to be on Erza’s level. I found it interesting that the King of Fiore, actually requeested a battle between Erza and Bacchus. I’m curious as to why we haven’t seen his face yet, but he seems to be totally unaware of what his captain of the guard is planning. 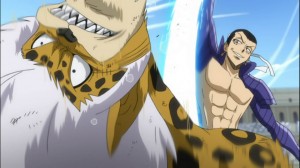 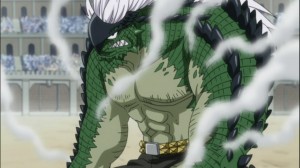 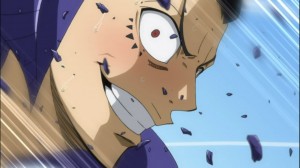 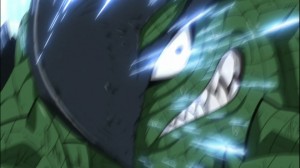 In any case, Elfman actually managed to transform into his Lizard from and hold out against all of Bacchus’s devastating attacks. I’m a bit curious as to why Elfman didn’t use his “hard as hell” Takeover that he got in the battle with Grimoire Heart instead of his new Lizard takeover, but well, I guess that’s just a minor detail. 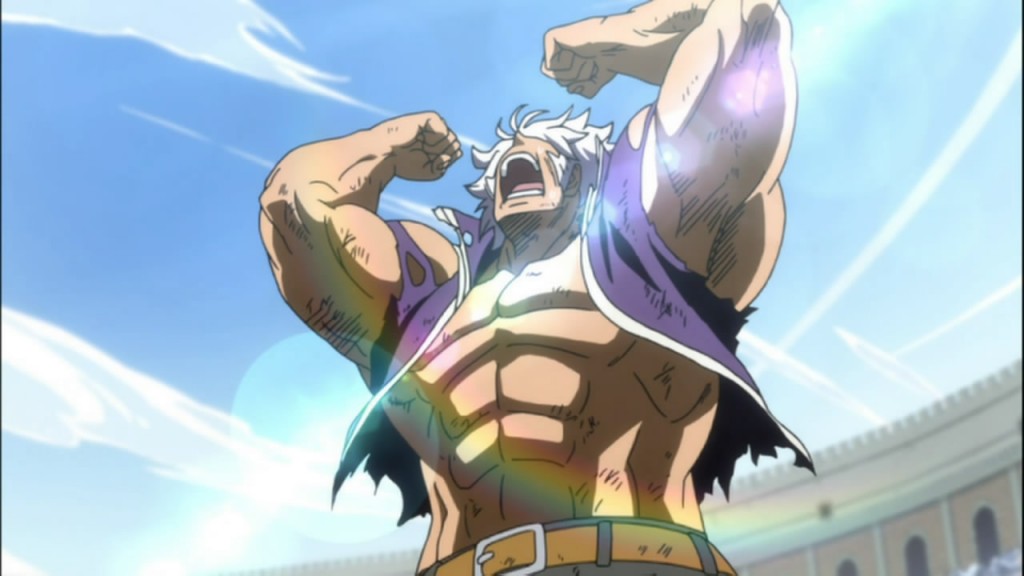 Finally a winner for Fairy Tail!

With Elfman having won this battle, and Lucy still safe from the Captain’s clutches, things seem to be going well for Fairy Tail. Here’s to seeing what happens next week! (the episode for which, is only 4 days away again! XD). 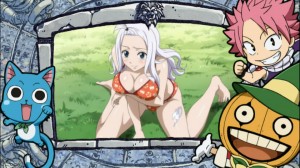 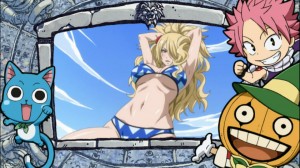 Next week, we have a Bikini showdown? Mirajane is involved? Well… Uhh… see you guys next week I suppose? XD