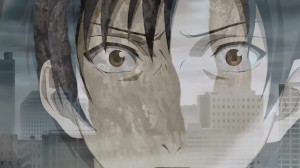 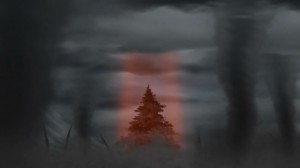 Well holy crap! I think this pretty much sums up the episode from my perspective. I mean really this was probably the best episode of the series and things just went straight to hell. Maybe the trees were tired of all the chatting, but they sure took over this episode. Hakaze’s return to the present was almost secondary to what happened after she did make her appearance.

Of course I loved the episode overall. The past few weeks it’s been just a lot of talking from Mahiro, Yoshino, Hakaze, and Samon. They’ve argued their perspectives, theories, and intentions. In the end I have no idea who is right and who is wrong. The Tree of Genesis appears to be a manipulative piece of work that may be behind everything. But at the same time the theory of an Exodus Mage is entirely plausible. Both trees should want to be revived and either one could have manipulated events towards this encounter. We really don’t know the limits of the Tree of Exodus here. 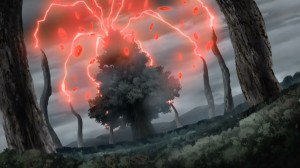 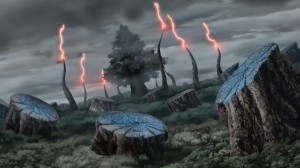 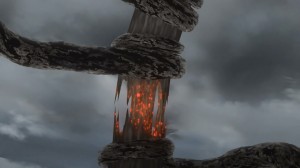 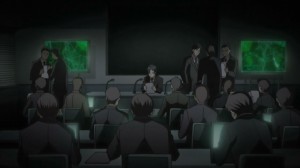 The big question though is why did the Tree of Genesis start reviving? Hakaze was years in the past and certainly couldn’t take that kind of action. Now maybe the Tree of Genesis picked a replacement that could perform the ceremonies. Another possibility is that the Tree of Genesis was full of it and Hakaze never had any ability to help revive it. Or there could be an Exodus Mage who interfered somehow. This could be good for the Tree of Exodus when you think about it. Samon and company would have just revived it enough to use it against the Tree of Genesis and then put it to sleep again. But if everything is going crazy then the Kusaribe clan can’t possibly stay in control and the Tree of Exodus can run wild. It’s really hard to say what theory is right here.

Clearly no matter who is at fault the world is going nuts here. The Tree of Genesis is powering up using civilization to make its move against the Tree of Exodus. All over the world that tree is making its move which is of course causing chaos and destruction all over the place. It truly is “a tempest.” By trying to avoid a Hamlet scenario did Yoshino help steer events towards an even more tragic conclusion? 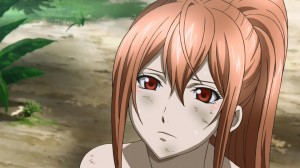 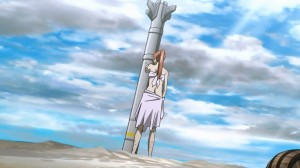 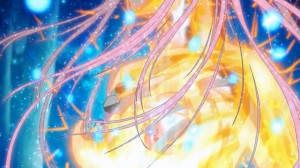 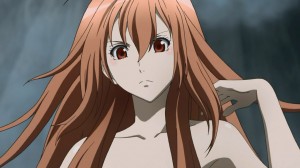 I will say it’s nice to have Hakaze back. I was worried she might never get freed and we’d be down a female lead XD. But she did a good job returning to the future…though clearly taking a Terminator approach in bringing no clothes with her. Considering the situation I doubt we’re going to have time to relax and find her a proper outfit. Guess she’s stuck running around in just a jacket for now. But considering the situation I don’t think she’s really all that concerned. At least if anyone can help Yoshino it is Hakaze. She has all the power needed, it’s just a question of whether it’s too late or not.

The Tree of Genesis really isn’t subtle is it? It literally dropped a missile onto her island that Hakaze could use to get off. Makes you think when it could have done that at any time and only now did it help Hakaze to that extent. I feel bad for Hakaze who is really blaming herself a lot. Nothing the Tree of Genesis did or did not do was her fault. She’s just one person despite her position and power she has. Never would Hakaze wish for someone else to die just to help her out. She did honestly want to find the killer and keep her word. I just hope she doesn’t put everything onto her own shoulders. Sure, listening more to Samon’s point of view might have helped, but considering we still don’t really know what is going on it might not have. 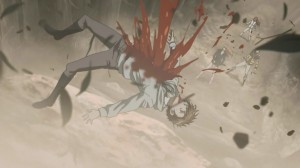 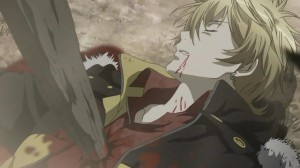 Still, the holy crap moment came at the end. Everything is looking pretty chaotic, but it seemed to be stabilizing with Hakaze keeping control. But then the war of the trees begins and Yoshino is just blown away by that attack. He looked dead before he hit the ground and there was a lot of blood everywhere. If it wasn’t for Hakaze being there I wouldn’t have any hope for his survival. If that wasn’t bad enough Mahiro was soon speared and taken down. The healing ability of their clan is going to be put to the test right now. Though I would question Samon not taking the tree out before trying to heal the wound. Would think it might be a problem, but he’s in charge here. He certainly doesn’t want a pissed Hakaze to kill him because he failed to help Mahiro. It is something to watch Samon turn into a quivering mess when Hakaze is involved.

It’s hard to treat what happened to Yoshino and Mahiro as anything but intentional. There’s just no way coincidence would strike to attack both of them in such a short amount of time. I’m not sure if the Tree of Genesis was completely behind this, but it is shocking. It could be possible though. If those two being alive could lead to Hakaze turning on the Tree of Genesis wouldn’t it act to remove that threat? Certainly does make the tree being behind the killing of Aika seem plausible. Could easily trigger a “coincidence” that would kill a girl like that. All I know for sure is that the end of this episode was nuts. We get this trio together and then almost instantly both male leads were nearly killed off. 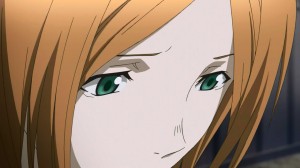 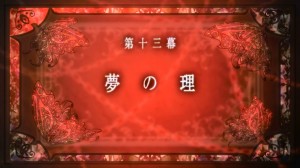 I have no idea what is going to happen here. Everything is just going crazy right now. Junichiro has vanished to do…something and Hakaze is desperately trying to stop the situation from getting worse. Though if these powerful trees are acting against her….what are the odds she can pull it off? Also pretty unsettling to have Aika giving monologues when neither male character is conscious to be having a flashback….
Score: A+