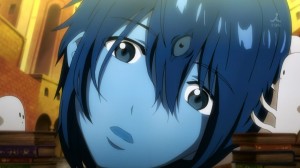 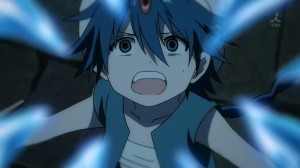 Well I had a feeling that Judal might cause some trouble in this episode, but I didn’t think it’d turn into an outright Magi v. Magi brawl. I’m not sure who was most at a disadvantage in this case. One would think Aladdin would be since he doesn’t understand his own abilities that well, but he also had Ugo to even things out pretty effectively.

Also have to give credit to this series for the music being really good. I just like the style they are using to fit with the Arabian theme of the whole show. Like the scene when Judal showed up in the middle of the meeting Sinbad was having with the Fog Thieves. It really does add to the scenes and makes the episodes more engaging. It picks up at the right times and especially makes Ugo’s almost suicidal assault on Judal even more fun though somewhat frightening to watch. 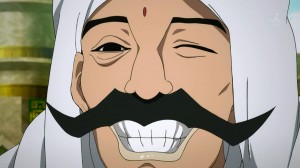 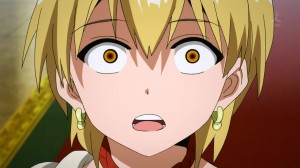 I really do feel for Alibaba who is just suffering through all of this. He was just not taken seriously by anyone except maybe Sinbad. Had the moronic King who is pretty much giving everything to the Kou Empire and doesn’t seem to have a clue. Alibaba just gives a damn and sadly he was one of the few people besides Sinbad who did. Nothing good is going to happen with that kind of ruler remaining in power. But sadly he doesn’t seem to have the sense to listen to what Alibaba is saying. Treating him and those who came from those streets like trash.

Also have this whole Banker concept being thrown in. Might explain that guy’s connection to all these various places. I could see why Judal cooperates with him since he seems like the type that could create conflicts and definitely enjoy it. I’m not sure though what this guy is truly all about since it feels like anything and everything about him could be a lie. Certainly though he is trouble and Sinbad recognized that fact. More trouble is on the horizon and just makes you think about the scope we are getting into here. 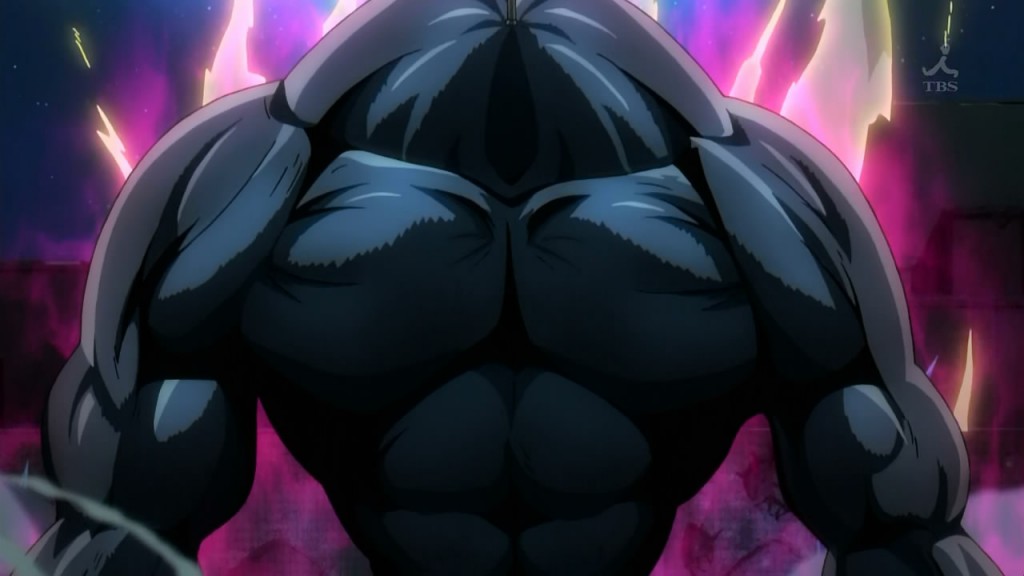 Do you really want to make Ugo mad?

I have to say that I didn’t think Ugo was that overwhelmingly powerful. Sure he could knock around some guards and such without trouble, but this was something else entirely. The force behind the punches, lariats, and various strikes was overwhelming in more ways than one. Near the end he was just beating the snot out of Judal who could barely even guard himself. Nothing was going to stop Ugo once he decided to cross the line and finish this battle. Even getting speared through the chest with a massive chunk of ice didn’t get the job done. It just gave Ugo the range he needed to crush Judal. Honestly I thought Judal was crushed to nothing and expected to see bloody goo leaking between Ugo’s fingers. This was even considering the OP and how there’s no way that guy is dead this early.

This episode does show though that Aladdin really does have limited knowledge. You already knew he had limited knowledge about himself, so maybe it shouldn’t be a surprise that his magical knowledge is also limited. He understands how to protect himself with magoi, but that’s just one part of the equation. Seemed like he used magic to blast away the troops when he met Hakurei, but maybe that was a fluke. Either way Aladdin is at a disadvantage when it comes to understanding magic and being flexible in its application. If it wasn’t for Ugo going berserk and just beating Judal then he would have lost that showdown. That’s even including Alibaba getting involved and Morgiana doing what she could.

Judal is a pretty scary guy though. He has all this power and can’t find a good way to make use of it. So the second he finds a good chance to pick a fight he takes it. A magi v. magi battle is something he could get into and really cut loose. When he talked about loving war you could get the idea of what kind of person he was. Siding with the Kou Empire makes sense since they are setting up for being that great military power. Kind of shows how he might not get along well with Hakurei who is all about peace and negotiation. Their goals clearly aren’t that closely aligned. 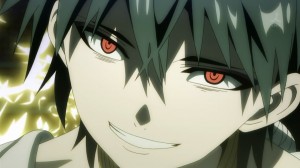 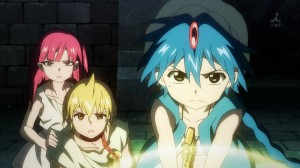 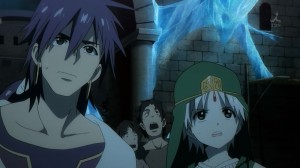 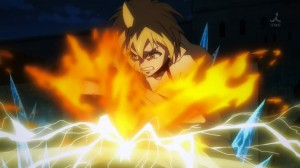 It also makes me wonder just what the Kou empire is really after. Their main goal in the end clearly has to be taking over everything, but the question is the method being applied. They seem ready to go to war against anyone though at the same time are letting Hakurei go around trying to gain peace. Makes more sense though why she had a warmonger along with her. The empire has to be full of that type of person who sees the power they have amassed and want to unleash it.

This episode was rough on Sinbad who was stuck standing on the sidelines. He can stand up against a Dungeon Clearer (to a certain extent) and people with magical tools. But against a magi like Judal he really was helpless. Not having any of his metal vessels pretty well made him unable to get involved. Those attacks he showed off in the previous episode just won’t work against someone that skilled. Makes it all the more frustrating that they keep those thieves involved in these episodes and yet don’t just get Sinbad his stuff. I want to smack those idiots so hard for making this situation even more dangerous than it had to be. 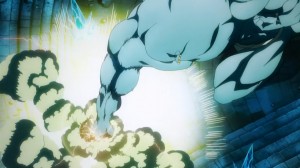 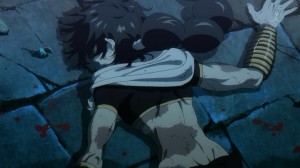 So now we are left wondering what is going to happen to Ugo. He is not in a great spot right now. That magoi has been leaking out for a while and I can’t imagine that’s a good thing for a djinn. Just hope they can get him help before its too late. It’s fine to stand up to protect a friend, but having him die (if they can die) would be a heavy price to pay for this victory. Looking forward to seeing how it all unfolds next episode.
Score: A+