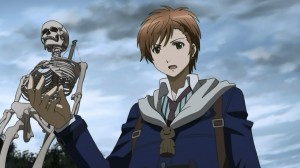 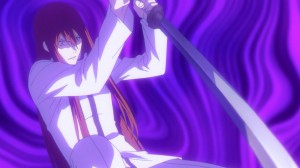 Yoshino is a freaking genius. There is just no other way I can look at this episode besides that. Even when things weren’t looking great, he still managed to have everything go his way. The goal after all was to sway Mahiro enough to get him back in their corner and while he’s not willing to shoot the tree yet, he is willing to help them out. They have an ally to find a way to save Hakaze and that frankly is enough. The only one who can probably figure this out is Hakaze and even her spirits have been lifted.

Samon remains the most entertaining character in this series. The man freaks out in the most hilarious ways and is just fun to watch. The series really has fun with the visuals surrounding him and showing how shaken he manages to get. Yoshino is completely dominating him in the battle of wits and even the small victories are taken away from Samon. He really thought that he could turn things around by proving there was a prison of time, but frankly that alone isn’t the issue. The fact that he’s showing how unsettled he is proves that he has a way to recover Hakaze and if they can figure it out then Mahiro will join with them and they can take their shot at the Tree of Exodus. Now whether they can do that before it awakens or the killer is brought forward is another question. 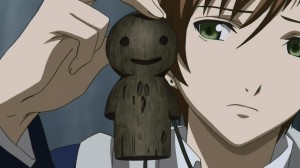 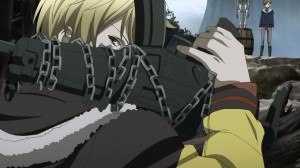 Honestly Yoshino really amazed me in this one. I even started to buy his theory for a short time when he was getting into full swing. However, after a few moments I figured it wasn’t right. Of course what I thought is what Samon soon stated that it didn’t really matter. All he needed to do was make Mahiro shoot the tree. When that happens Samon would have to bring back Hakaze regardless of how he managed to put this cage of time together. But even I didn’t think the step beyond that. Even if Samon could prove that there was a time gap it was too late. Hakaze was finally back to her old self and even Mahiro was willing to help find a way to save her. Yoshino really wanted them to combine their strengths and that was a success.

It was a pretty entertaining theory though. For someone who doesn’t know a ton about magic Yoshino couldn’t figure it all out. But he could come up with a good theory that makes sense from a normal point of view. It is possible to keep someone in that kind of state for a couple years. Of course if he actually did that Hakaze’s body would be in bad shape from lack of exercise, but it was a solid enough theory. I just loved beating the whole magic thing by saying “logically speaking through time is rather unlikely.” Even though we have magic trees and super talismans and all that. A perfect time to bring normal logic back into the picture. I’m not sure if it was more fun watching Yoshino do his thing or watching Samon flip out. 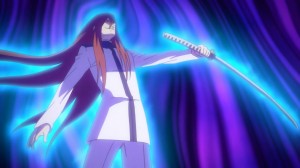 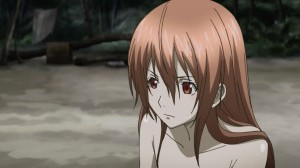 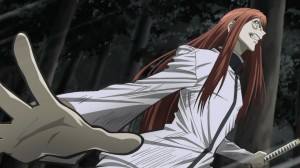 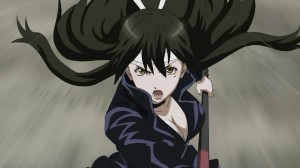 Now the question is how has Samon managed to pull this off? It sure sounds like a trick that required a lot of effort to accomplish. Obviously the time gap is real and that is Hakaze’s skeleton. Actually I have to say that was rather creepy how Yoshino was goofing around with Hakaze’s skeleton (while he used the theory that it was a fake). Of course it was all part of his ploy, but still rather weird. Anyways, I’m still guessing the barrel matters. Why bother keeping the skeleton in the same barrel after all this time? I doubt he kept it to prove there was a time prison. There has to be a way to swap the skeleton of Hakaze in there for the Hakaze of the present. I just can’t think of any other way she might be brought back. Of course if that’s not how it is going to be done then I look forward to seeing the truth.

Sure, there was some other stuff going on this episode. You had the little fight of Yamamoto, though I didn’t care too much about that. Maybe more interesting was Junichiro showing up on the battlefield. Just what kind of role is that guy going to play in all of this? At this point wouldn’t be surprised if he had something to do with Aika’s death. Playing his part for the sake of Hakaze since Aika needed to die if they were going to bring those two guys into this mess and help her out. Regardless, I look forward to seeing what role that guy is going to play. He is just really weird and yet someone you can’t afford to not take notice of. 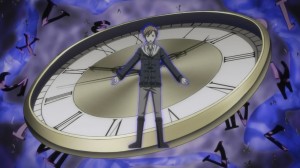 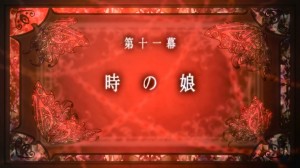 But this episode was pretty fun. It was mostly Yoshino throwing theories around while managing to bring everyone back together. He is playing his role well and now they might just have some hope. With Hakaze fired up again they can figure out how to bring her into the present and stop Samon. The guy might be extremely entertaining, but I wouldn’t side with him. It’s a race against time and let’s hope that they can win it.
Score: A