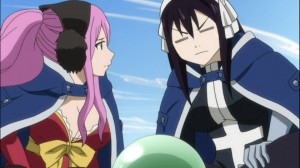 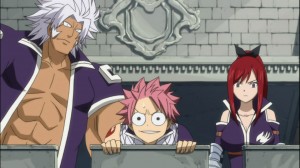 It seems like Fairy Tail is doomed to perform poorly in these Grand Magic Games. I must admit, I’m a fan of protagonists losing and being in tight spots, but the way Fairy Tail seems to keep losing, is starting to wear thin on my patience. I think the most frustrating part of these battles is that Fairy Tail hasn’t REALLY been outclassed as much as they’ve just had stupid stuff happen to them.

Last week, we had the annoying Raven Tail cheat and drain Lucy’s magic and have her lose. Again, not because Lucy was outclassed as a Mage, but because villains can cheat and get away with it. I expressed my disappointment, and I was kind of surprised to see that I was kind of the only one who was rubbed the wrong way by the scene, judging by last week’s comments XD. I apologize for not being able to reply to them. I’m in the middle of finals week, of my second last semester, so things are a bit hectic. I am reading those comments for sure, and will try to mention them in my reviews themselves if I can’t reply to them individually! 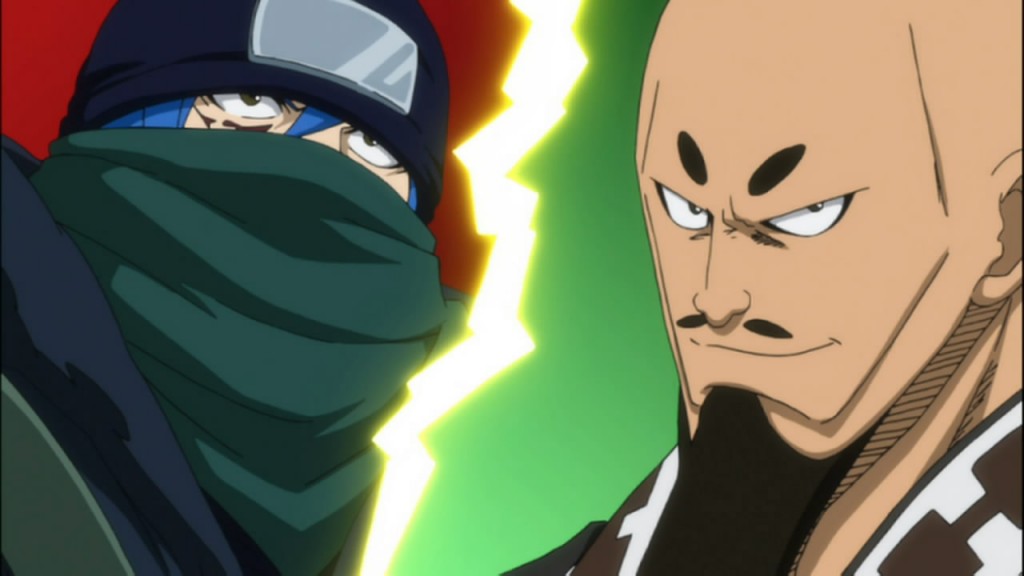 This week though, we had Jellal as Mystogan’s big fight, and it followed much of the same pattern that Lucy’s battle did. Jellal started off as a complete badass, and man was it cool to see him in action. The more I see Jellal in the role of Mystogan, the more I want him to take on the role permanently and become a member of Fairy Tail. The love and passion that Jellal has for Fairy Tail is awe inspiring, and it was really really nice to see that on display in this episode. 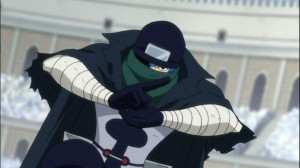 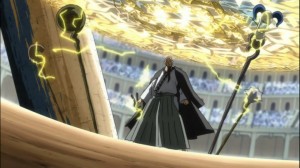 First, Jellal started off by imitating Mystogan completely. It was pretty sweet to see how naturally and completely Jellal could adopt the powers of his Edolas counterpart. At the same time, I’d say the Jellal of Eathland is pretty darn strong in his own right. Given that Jellal was facing off against Jura, it was no surprise that he had to pull out all the stops and use his real magic. 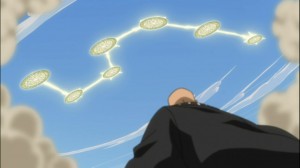 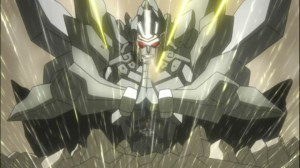 And man, was it great to see Jellal in an actual position of power. Since Jellal’s defeat in the Tower of Heaven arc, we haven’t seen the guy in a state that didn’t scream “weak, depressed or confused”.  Seeing Jellal’s light magic again was a real treat, as was seeing some new tricks. The connecting dots/star constellation magic that he cast was impressive to say the least.

Of course, Jellal’s opponent was Jura, who totally kept up with Jellal, blocking and parrying his every move. I’ve got to say, Jura’s also kept his rank as a Magic Saint going these past 7 years and it really shows. At this point I was sure that the battle would end in a tie. For Jellal, in fact, things were looking seriously bad, as Jura had begun to figure out who “Mystogan” was. 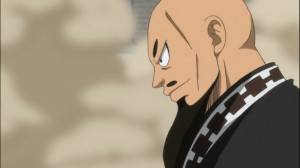 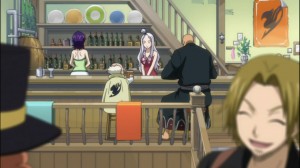 I’m curious about what Jura’s end goal is with regards to Jellal and his guild. Are the 10 Magic Saints against the idea? Is Jellal still being hunted? If someone like Jura is on his tail, then Jellal really can’t afford to expose himself.

Despite that, however, we had Jellal pretty much decide to screw himself and use a new, never before seen Magic spell. I haven’t the faintest idea what that spell was, but it seemed like something completely new and different. I’m sure Jellal has an entirely new brand of magic since he formed his new guild. 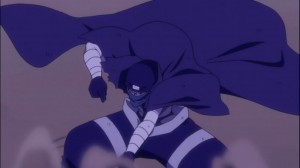 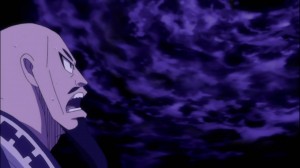 Whatever it was, it seemed to catch Jura completely off guard. I’m not sure if Jellal would’ve won if he had used his new magic, but unfortunately we’ll never know. Ultear and Meldy pretty much forced Jellal to stop via Magic link.

And man… was that quite the torture session. Added to that, Jellal went from being a cool badass, to completely making a fool of himself… 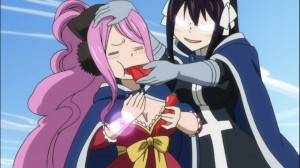 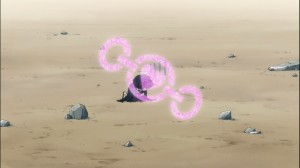 Poor guy, he really did want to give something back to Fairy Tail, but ended up not being able to do much of anything. Again, this whole trend of “Fairy Tail could have won, but… [INSERT STUPID REASON]” didn’t really sit well with me. Honestly, the only one who was even remotely catching onto Jellal’s identity was Jura. At the same time, this reason for Jellal losing does make a bit more sense than Lucy’s. Then again, its even more frustrating because Jellal’s re-emergence as an actual hero has been a long time coming. Its sad that this is how his first attempt at being a part of Fairy Tail ended. 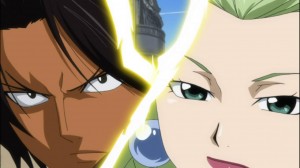 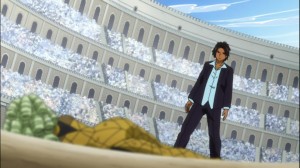 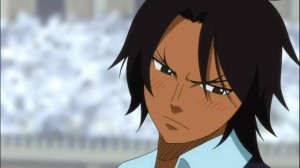 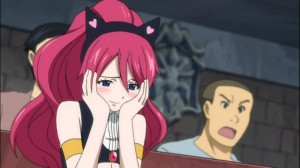 Beyond that, we had two other battles. The results weren’t surprising. Ren from Blue pegasus won his match. The interesting thing regarding Ren was the fact that he’s engaged to Sherry. Wow… subtle way to thrown in a big development wasn’t it? So apparently the two are in different guilds but are engaged and together? Pretty darn awesome. I guess Lyon should be getting a bit more hopeful then aye? Dunno if there are any Juvia x Lyon fans out there XD 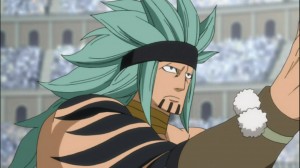 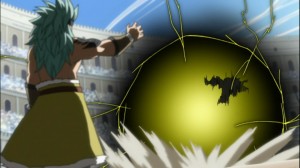 The other battle, was between Sabertooth’s Orga Nangear and Quantro Cerberus’s War Cry. The match went pretty much as expected, with Orga ending it pretty darn quickly, as seems to be the trend with anything that Sabertooth is involved in. The interesting thing to note though, was that Orga’s magic was based off Lightning, much like good old Laxus. A potential battle later down the line?

Beyond the battles, we had some good old “foreboding” plot elements introduced. First, there was the whole thing with the captain of the guard, who as we learned in the last episode, seems to be working under Zeref. What surprised me is how he mentioned that “She was rippenning”. I’m not sure if this was related to Lucy or not, but all things seem to point to it. 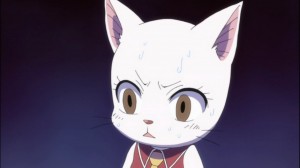 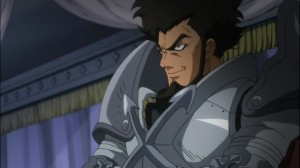 Even Carla had another one of her future prophecies, and it was slightly different this time. Instead of seeing a flash or vision, Carla actually heard Levy’s voice or words. Seems like something really bad is going to happen right after these Magic games. Now… given that the Carla’s visions have not been changed so far in the series, I guess this is nothing more than a tease of what’s to come in the future.

All in all, this was a good episode. Fairy Tail is definitely going strong these days, and while I am personally sad at Jellal losing his battle, I can’t say I didn’t enjoy this episode a lot. Here’s to see what happens next! 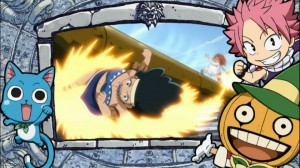 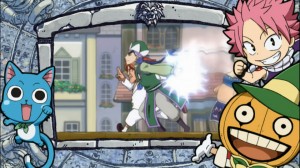 Next week, the Grand Magic Games continue. Seems like Natsu, Gajeel and Sting will be going head to head in a “Chariot” event. See ya all next week!