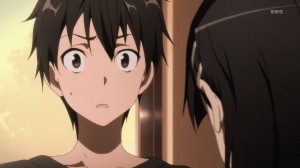 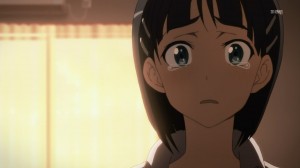 Well this went about as badly as I expected it to. They’ve been setting up this huge blow-up for Kirito and Suguha for this entire second half of the series. First they start hitting her hard with realizations about his relationship with Asuna, then they introduce another option for her in Kirito, who then turns out to be the same guy. I knew it was going to hurt watching Suguha realize that Kirito was searching for Asuna and who he was. There was just no way the closer they got to Asuna to avoid actually saying her name. Yui did a lot of the work which helped, but eventually it had to come out.

I just feel really bad for Suguha. I didn’t want to and tried to rationalize it, but in the end I still feel bad for her. It’s really not her fault who she falls in love with and in the end some of it makes sense. They were so distant for years because of the kendo incident, then came him vanishing into SAO. By the time he came out she was able to come to terms with her own feelings, but it was too late since Kirito fell in love during those two years with Asuna. She just never had a chance. 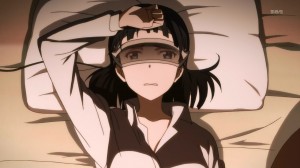 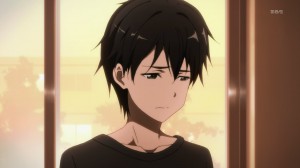 Now you see her broken up on the bed crying her eyes out. Suguha really tried dig a hole and stuff her feelings into it. The girl gave her best to just try to suppress it and eventually have that unrequited love fade away. But when she realized who Kirito was….it was just impossible to hide that shock. She’d already cried her eyes out once regarding the hospital incident, ironically with the guy who indirectly caused those tears. It just sucks to see her getting beaten up like this and little hope for a happy ending. I’m sorry Recon, but I don’t really see him fixing things. He’s a good guy, but honestly I still think he’s like a B solution. A fallback that she’d probably never really fall in love with, but just end up with because he’s close and interested. I’d rather see Suguha just find a way to mend things with Kirito as best as she can and work her way alone for a while. Falling in love three times in a series would be too much.

I also feel bad for Kirito who really never saw this coming at all. He never knew that Suguha had found out they were cousins. He’d spent those years thinking she resented him while at that point she had fallen in love with him. Kirito just never saw her as a love interest and now this all blows up on him. He kept his distance before out of feeling inferior to her and thinking she hated him. Finding out Leafa was Suguha had to be surprising enough, though I think subconsciously he realized it. At that point what can he say? He’s been chasing after Asuna all this time and there isn’t any perfect way to fix this. I don’t know if it’s more shock or guilt that he’s the reason that Suguha is hurting this much. That she’d had those feelings and he hadn’t noticed them at all. 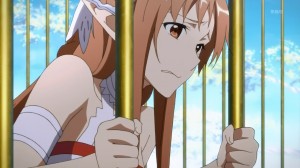 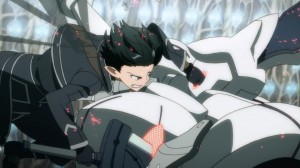 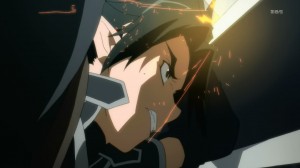 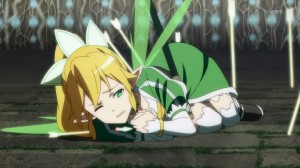 All this while we know that Asuna is up there. Yeah, there was more to this episode than just the Kirito and Leafa incident. Smart move by Asuna dropping the card down there. It was a gamble since she might never get a key that could help her log out again. But she probably knew that Kirito and Yui would figure things out and frankly Kirito could probably make better use of it than she can. Certainly she’s going to have tougher security so escape might not happen any time soon. At least it’s another way that Asuna can take action and help rescue herself.

Kirito was just out of control this episode. First he just charges into that barrier over and over again until that clearly wouldn’t work. Then he goes on a suicidal charge through the Guardians. I think the fact that he can’t “die” in this game made him even more reckless. Even though he’s acted in ways where he doesn’t want to see party members die, he still is willing to take reckless actions. For the sake of seeing Asuna again he just charged into innumerable enemies who were all pretty tough. One on one, he was certainly more powerful than the Guardians, but they just had too much firepower for him to bypass. The fact that they were firing arrows….and swords at him probably didn’t help things! He did pretty well, but it’s perfectly clear that he’s not getting through there without a full out army on his side. At the very least he needs enough meat shields to help out.

That was a gutsy move by Leafa though. She just charged right in there to rescue Kirito and then get the heck out. She wasn’t exactly blowing them away, but that wasn’t her goal. The fact that a normal player like her managed to get in there and get out in one piece says a lot about her skills. It might not have turned out well for her, but frankly that doesn’t take away from what she managed to do in there. I just wonder though if anyone will be able to get through there even with a super army. That seems like an insane number of tough enemies to take on. Maybe with Kirito they can handle it, but won’t be easy. Sure be nice if they had Eugene from the Salamanders to help out. 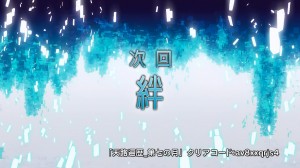 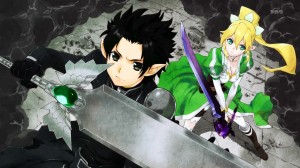 Not much else to say since this episode had a lot of action and then hit hard with the emotional side of it. I’m just not sure how they are going to resolve things. Somehow they’ve got to do it though because Asuna needs help and frankly Kirito will need Leafa’s help in whatever they decide to do here.
Score: A-