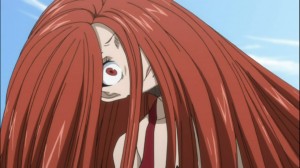 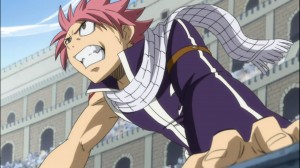 Its been a while since Fairy Tail showed us an episode that was difficult to watch. Not a bad episode per say, but just painful and sad to watch. Leave it to this series to surprise us in both a positive and negative way in the same episode.

Ever since this Magic Games Arc has begun, the theme has been how much things have changed, and how weak Fairy Tail’s previously strongest are now. It was surprising, therefore, to see a different trend when it came to Lucy Heartfillia.

For the longest time, Lucy has been relegated to the fanservice character, and the butt of many a joke. She barely manages to scrape by in her battles, although when she does get serious, she manages to do some really cool stuff. Over all though, Lucy wasn’t exactly considered one of the stronger members of Fairy Tail.

I think the best part about this episode was the fact that Lucy really became quite the leading lady in this episode. I’m content to say that she’s really proven herself in her latest battle, and she truly has grown. 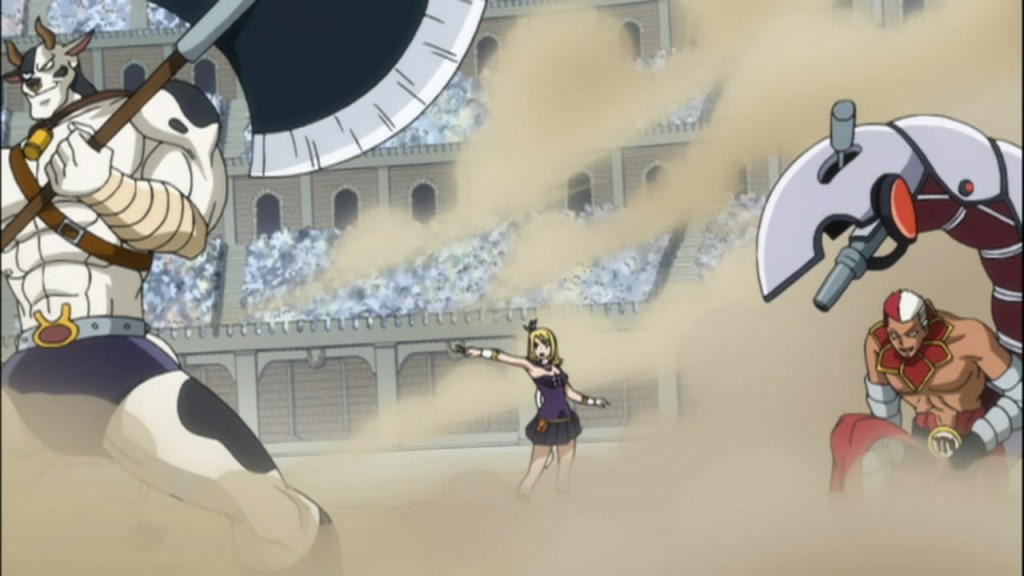 We saw that Lucy can now open two gates at once, which was something that truly exhausted her before. She can use two gates in battle like its nothing, which is cool, but what truly stood out to me was how well she used her Celestial Spirits. There was no stupid mistakes, no mis-fires and no mistakes. Each Celestial Spirit came in, did their job, albeit sometimes hilariously (Gotta love Cancer’s awesome cutting skillz! XD) and then left. 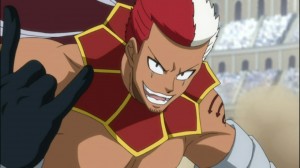 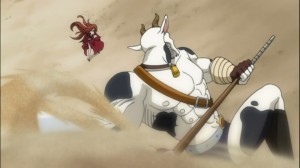 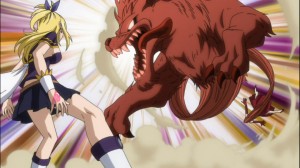 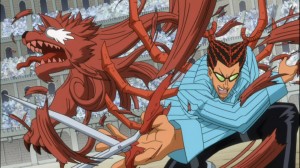 I was especially pleased to see Celestial Spirits like Taurus and Scorpio actually wipe the floor with Lucy’s opponent for once. It was definitely satisfying, and seeing both Taurus and Scorpio combine their powers on Lucy’s command was pretty kickass. And honestly, to anyone watching, it was plain as day that Lucy was clearly the superior Mage and fighter in the battle.

And then… Raven Tail began their cheating again. Okay… I’m fine with Fairy Tail pushing Gray around, and really putting the A Team in a pinch, but the amount of cheating they were allowed to get away was nonsensical  and bordered on insane! 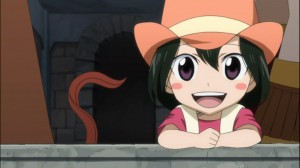 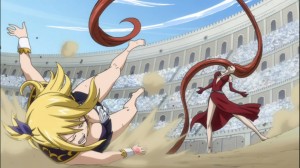 First, lets discuss the whole idea of Flare’s whole “I will kill Asuna” if you fight back or say anything at all. This whole scenario was so darn stupid, it stank like a skunk in a landfill. I refuse to believe that a Mage as weak as Flare could slip a strand of her hair right next to Asuna when amazing Mages like Makarov and Erza were around. Are you friggin kidding me? NO ONE except Lucy noticed the hair that was twirling and sometimes in PLAIN SIGHT: 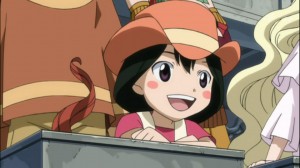 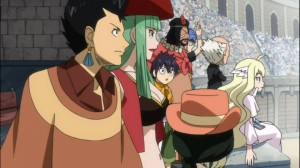 Don’t get me wrong, I love a good villain blackmailing the heroine scenario, but it has to not ask me to suspend so much of my disbelief. The fact that everyone in the crowd didn’t notice this, and Lucy had to take a serious beating was just… argh. I suppose there had to be some reason for Lucy to be wrapped up in Hair tentacles, but still. You have to have a better reason than “everyone just didn’t notice”. There are some serious Mages in the crowd, RIGHT NEXT to friggin hair.

Added to that, the end of the battle just left me shocked. Alright, let me digress for a second. I get the fact that Lucy had to lose. From a story stand point, Lucy losing makes things worse for Fairy Tail, puts them in a tighter spot, which makes it all the more exciting when they eventually DO turn it around. I get that, I do. I did, in fact, come into this battle expecting Lucy to lose. But… the way she lost? What… the… bloody… HELL?!?!? 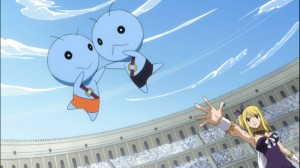 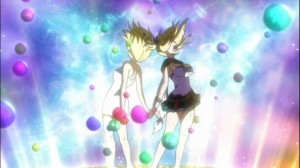 So Lucy goes all badass, and awesome, summons Gemini and even casts her most powerful Celestial Magic Spell, Urano Metria. Honestly, after dealing with all the cheating that Raven Tail dished out, and over powering it every friggin time, I don’t care how good it makes the plot, Lucy deserved to win there and there. Lucy had earned the right to win, and yet she didn’t. 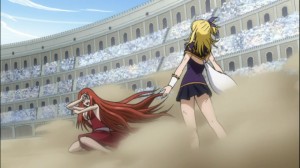 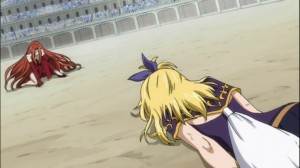 Instead of winning, Lucy had all her magic suddenly drained, and stopped. Just like that. NO friggin explanation as to how, no real explanation as to why. None of the organizers even looked into the fact that some clear cheating had happened? NO ONE from the crowd, except for Former Magic Council member Yajima and Jura got what happened? 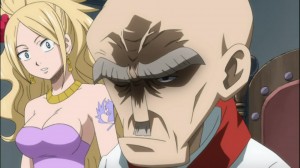 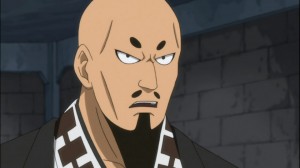 Only Yajima displayed the proper amount of anger? What the hell? Makarov, I’m beyond disappointed in the fact that you didn’t raise some serious hell right there and then. I know I would have. And it was this kind of stuff, that just made this episode not sit too well with me.

The desired effect of really feeling Lucy’s pain at losing despite being the clear winner, was given. Any viewer probably felt really angry and bad for Lucy. But this wasn’t just unfair, it was stupid. It is so out of character for all the Fairy Tail members to take this sitting down. And its time like this, where I’m disappointed in both Fairy Tail and its creator Hiro Mashima-sensei. When characters become slaves to the plot, instead of the driving force behind it, stuff goes to crap. Fairy Tail, when its cannon manga material, has never let me down like it did in this episode.

And speaking of weird, Natsu was actually a sort of saving grace for the rest of Fairy Tail. I really liked how he truly supported Lucy from the background. First, he was the only one to catch wind of what was going on, and quickly put an end to Flare’s hostage situation: 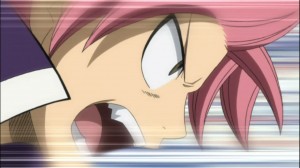 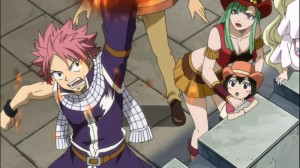 Then, after all had gone wrong, and Lucy lost, I was touched by the way Natsu went up to her and what he said to her. Truly, those were the kind of words that Lucy needed to hear. For a tactless idiot, I think I really digged how gentlemanly and precptive Natsu was here. “You did great, you showed me that we can fight in this world”. Golden words right there, because Lucy truly had shown everyone in Fairy Tail, that if someone like her can improve so superbly, they definitely have a fighting chance in this new world. 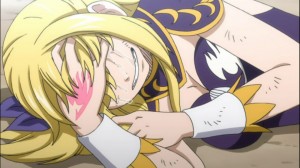 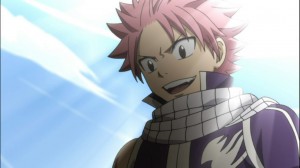 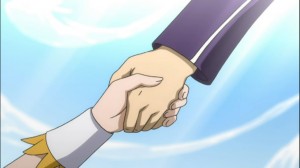 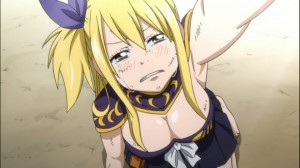 This huge detriment to the plot aside, I actually really liked how hate-able of a villain Flare was. She was a grade A despicable and disgusting villain. Not strong enough to win through fair means, she resorted to taking advantage of Lucy’s weakness, compassion and love. Added to that, she really did torture Lucy in some of the most scary ways possible. I gotta hand it to Flare, the best torture was definitely actually branding the Raven Tail mark over the Fairy Tail Mark: 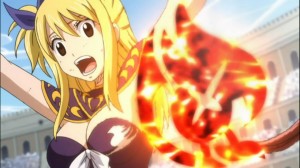 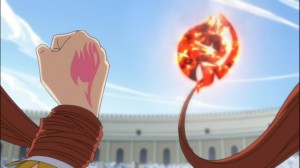 I got some serious chills as Lucy was all strung up, unable to do anything because of Asuna, and then about to lose the one that she held dear and was most proud of. It’s one of those creative ways that really made Flare stand out as a villain that I truly despised. And that’s a perfect quality in a traditional villain. It was definitely a much darker idea than just stripping Lucy naked infront of everyone, and I’m sure some of you pervs were disappointed. 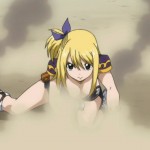 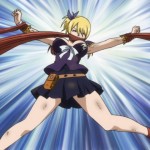 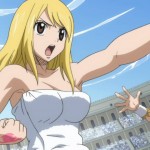 Fear not, there was plenty of Lucy fan service, degrading shoes and some bondage type stuff…. for whoever was interested in that stuff. And of course, the traditional, Lucy in just a towel XD

And with that, I got one of the most odd episodes of Fairy Tail I’ve seen in a while. Natsu and Lucy really stood out as having matured and improved. Yet, at the same time, Lucy lost her battle because the plot dictated that she HAD to, without much sense or logic behind it. It was a disappointing episode, but I won’t disagree with the fact that I was glued to my seat throughout. While the ending left a bit to be desired, Fairy Tail was still in top form from an entertainment perspective. I just hope we don’t start losing sense, character development and the like just for interesting plot events though. 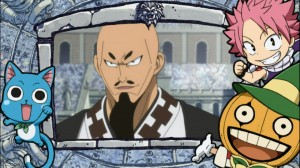 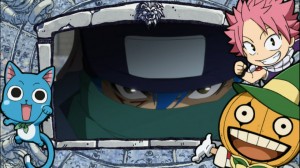 Next week, we have Jura vs Jellal. Lets see how Neo Mystogan performs!