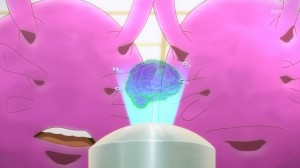 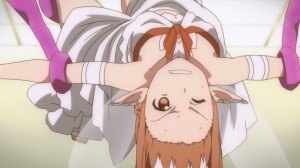 Well we had just about everything from a non-battle episode. Story moving ahead for Asuna and the Kirito/Leafa duo. It was good to see Asuna getting around and taking action in this episode. Of course in the end there was always that tension of getting caught since she is pretty much a damsel in distress at this point. She might be determined to free herself, but that just isn’t likely to happen here.

Maybe one thing I wasn’t a fan of was the classic, inch away from getting free and then caught. I mean seriously, if her finger was that close by the time those things even touched her she would have pressed the button. Not to mention those weird things managing to speed across that much space and catch her in time. But, I suppose it’s all for the sake of dramatic tension. 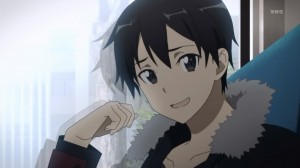 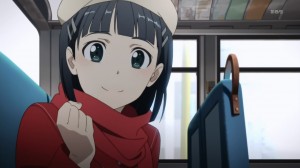 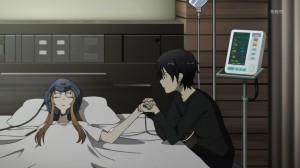 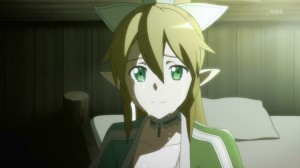 So, we’ve hit the first heartbreak for Suguha. Almost feels like a checklist since she’s still got to get heartbroken by Kirito in-game. While I do feel bad for her, it was completely expected that this was going to happen. She’d see Kirito and Asuna together and get completely shattered by it. Maybe she could draw a line when she didn’t see them together, but that wasn’t possible anymore. I will give the episode some credit since I did feel a lot worse for Suguha than I expected to. Maybe it was more because of how Suguha handled herself throughout this situation.

It’d be lot worse if she had tried to force a conflict or became resentful. But she went there to really confirm things in regards to herself and ended up taking that heavy hit. I could really respect Suguha throughout this episode. Suguha understands that she doesn’t have a chance in competing with Asuna. She lost that battle in a world far away from her. While a painful choice I can respect just shoving those feelings down until they eventually fade. Normally I wouldn’t say suppressing feelings is a good plan, but really what else can she do about it? It wouldn’t help anything to throw this at Kirito. The best she could do was break down into tears with the Kirito that doesn’t know who she really is. It’s not going to be a pleasant experience for Suguha, but it’s about all she can do. 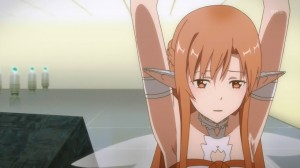 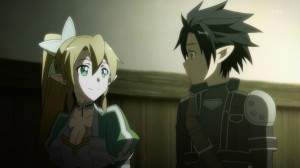 Of course saying all that I’m really not looking forward to any heartbreak from Leafa. I mean, hasn’t the girl gone through enough here? Do we really need her to fall for the same guy twice and get heartbroken both times? Well at least with the whole “Mama” thing from Yui they can get right to it if they are going that route. Cut off the affection here before it goes any further. Also just saying that I really hope we don’t get her falling back with the school friend, nothing worse for the future than ending up with someone off of double heartbreak.

As to Asuna’s situation….she was pretty close to a horrible tentacle situation there. I mean geeze how many times as she been sexually threatened in this arc? She better get saved soon before her luck runs out. This has not been a pleasant run for Asuna whatsoever. She’s been held hostage in a cage, threatened god knows how many times, and is pretty much completely helpless here. About the only thing going well for her is the fact that Kirito is completely faithful and not getting tempted. 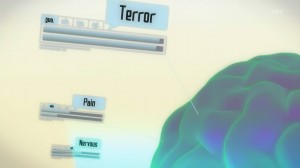 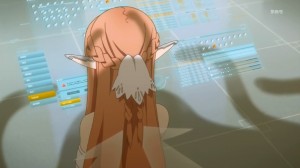 As to the situation in that room, well it was as bad as expected. These twisted psychos are messing around with people’s brains and having no issues with it at all. How they see torturing human minds as better than torturing animal minds is beyond me. Both seem pretty bad. The fact that it’s digital apparently makes it all good? And hey between the horrible nightmares they are getting pleasant dreams. They are messing with people’s brains and god knows what state they will be in if they get out of this. These people have had some of the worst luck on the planet. They get thrown into a death game which they somehow manage to survive. Then they get tossed into this torture facility where their brains get prodded and messed with. They may truly be insane by time they can be rescued. In comparison Asuna has had it good.

So finally Kirtio has reached the tree. Now of course this news about Asuna actually being here will make him do something crazy to try and get to her. I mean to this point he’s been working based on a blurry image that could mean absolutely nothing. But now he’s got concrete proof that Asuna is here. Now, maybe the testimony of his AI daughter won’t be enough to stop things, but it does give him a renewed motivation to get to the top of that tree. To this point he’s just been looking into it with the hope that there is a chance Asuna would wake up, but now he knows she is here. I feel a bit bad for Leafa since he does just rush off and go a bit crazy on her there. But he’ll hit the wall and they will simply have to get up there the old fashioned way….with an army XD. 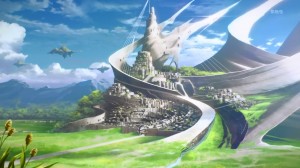 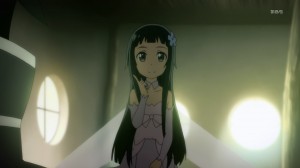 This episode was pretty good for moving Suguha’s story along along I was never very excited to see her get her heart broken. Still, I do think they did a good job with it’s delivery. Now we just have to see where this all goes. The key question as to how Kirito will beat someone with complete authority over that world still has to be answered. Still, I look forward to seeing what Kirito does now that he knows Asuna is here.
Score: A-