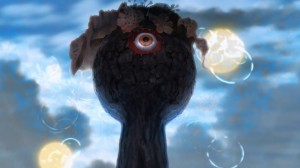 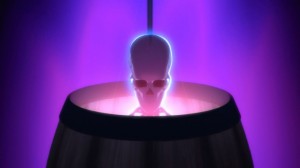 I’ll say right now that I’m not sure if I called it in the blog, but I totally thought this was a possible solution in my head at some point. Finally the secret of Hakaze and the skeleton comes out. It seemed to be one logical way this could all make some shred of sense, though in some ways I’m still a bit lost.

Does seem like we’re set up for the end of the world either way. I can’t believe that Samon and company have killed all these people on the basis of a guess. I mean let’s face it neither Hakaze or Samon have any legitimate evidence to prove that their viewpoint is more likely to be true. Cities have been wiped out based on the guess that everything could work out nicely for Samon and the rest of the world. 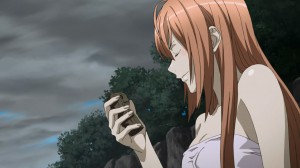 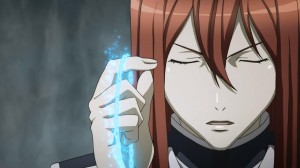 In the end though it’s a damn guess. Samon doesn’t actually know that his view will be right and save the world. He blasts the Tree of Genesis with that Tree of Exodus and everything might end. It might be saved, but it might end as well. I think the only reason they chose this option was because it made them feel proactive and not helpless. Samon declared it himself that they aren’t slaves of the Tree of Genesis. Instead of following the almost god-like Hakaze and the tree that gave them powers they decided to take action to feel like they were making a difference. Who cares if they destroy a few cities long as they believe they are saving billions. Though not like they took any steps to limit damage or save lives. Samon might be right, but I’m more willing to lean towards Hakaze simply because her idea doesn’t involve slaughter in the name of righteousness.

What really has me lost is whether Samon is a moron or not. How can he be taking this kind of gamble without Hakaze being alive? If it all goes to hell how are they going to stop it now? Frankly, it seemed like a horrible idea to just drop her off on the island without some basic supplies. I get you don’t want her to magic herself off the island, but keeping her alive should have been a basic kind of thinking. Instead he’s going around showing off her skeletal remains like it’s some kind of show. This guy is sick to put it nicely. 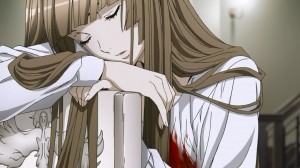 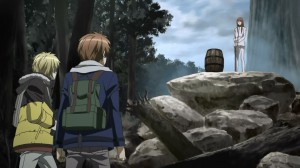 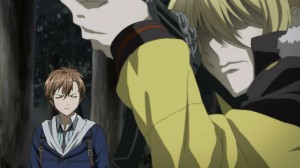 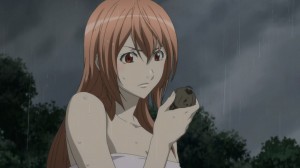 That brings us to the big revelation of the episode about Hakaze. I did really think that time travel was possible here. Talking to the past isn’t completely nuts when you bring fantasy logic into play. Though some things still don’t make sense to me. Wouldn’t it be more helpful for the logic of the world to find a way to rescue Hakaze in the past so she could stop Samon in the future? After all in the worst case scenario she will be needed to do more than just talk. So is it really effective to just make her able to talk to the future and have Aika die to create a Mahiro that would support her? But if you don’t want to look at it like that the theory does have some validity. Aika is killed to make Mahiro desperate for revenge and willing to work with Hakaze. Get him to this point so Samon can be stopped.

I’m still not wholly sure I buy it. Just because Hakaze is talking to the future doesn’t mean she’s dead in the present. Bone identification is weak based on touch and that corpse could just be Aika or anyone else. They might not be willing to pull a twist like that on us now, but still I can’t fully accept what Samon is claiming only because it makes him look like a bigger idiot. 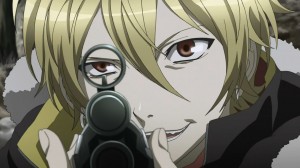 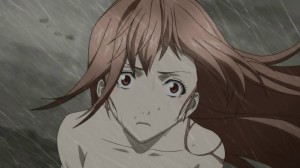 Talk about a brutal piece of information for Hakaze though. Exactly how does one respond to this? Technically she isn’t dead here. It is kind of like getting a death sentence though. But, if she destroys the barrel or something like that good luck with Samon finding her dead inside of one. Unless no matter what she does it just affects some alternate timeline that she isn’t interacting with here. Absolutely brutal blow to take though. Agonizing for Hakaze to have to deal with this right now.

The really scary thing though is what Mahiro might do. Samon the genius has just told Mahiro that Hakaze can’t be brought back. Therefore he is saying that short of beating information out of every mage he may never know who killed Aika. Now let’s remember that the man holding a weapon that could upset the ceremony and put the world in jeopardy is Mahiro. Suppose Mahiro decides that if they destroy the world that will be the only way to punish Aika’s murderer and get revenge. Is anyone else worried about the world getting destroyed not by the Tree of Exodus or Genesis directly, but by Mahiro intentionally? This could get very bad, very quickly. 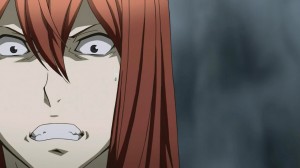 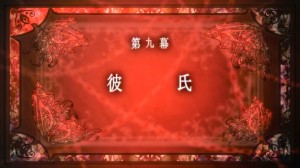 In the end this episode finally brought the answers and damn it brought some intense stuff down on us. I don’t know who is right or wrong here, but I know that Yoshino is about the only person who is thinking about that. Everyone else is either convinced they are right or simply don’t care. Next episode promises to be pretty insane.
Score: A