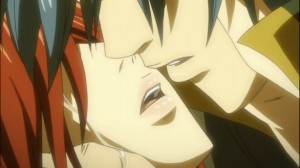 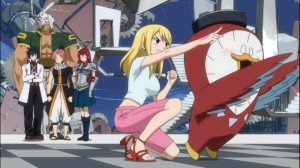 It’s been a while since you’ve seen a post like this on this here site, hasn’t it? Honestly, that is a darn shame, because Fairy Tail has been at its strongest in this past week than it has for a while now. I don’t think I’ve enjoyed anime like this for a while. Its a testament to how amazing a series Fairy Tail is and how amazing its creator is, that when you’re getting the story straight from the original source, its as addicting and powerful as anything I’ve seen from Anime industry master pieces like One Piece. Heck, these days, I’d say Fairy Tail is better than One Piece and most shounen series because of how well paced it is.

If there’s one thing I felt while watching these four episodes in one go, its that each one had a good chunk of content that would’ve had me felt satisfied every week. As for why I didn’t watch or review this series for about a month, honestly, I’ve got no good excuse. I’m a senior in Art school, studying to become a Game Development Artist, as well as a Web Designer (everything you see on this website is coded and designed by me). Juggling these two very different majors and trying to keep up with SLEEP has been a challenge, let alone writing about something as awesome and involving as Fairy Tail.

I will say this, Fairy Tail is an amazing series, and I really love Anime Evo.Net and the visitors who have continually been checking back. Our visitors haven’t dropped a bit, even through a month of inactivity from me (although I think a lot of that credit goes to the amazing FlareKnight and his posts on Sword Art Online, Zetsu no Tempest and Magi), but I will definitely say that every time I had to miss out on writing for Fairy Tail, I died a bit inside.

All that aside, I’m MAKING time for Fairy Tail because honestly, it’s going awesome and I really WANT to write about it. I’ll just sleep 2 hours instead of four or something XD

So… A lot has happened since I last checked in. Last we left Fairy Tail, they had just wasted three months of training time on a one day visit to the Celestial Spirit world. Given that there’s been that whole 7 year “blank”, Fairy Tail was at a serious disadvantage.

So who would help them in a pinch? Well color me surprised but it was none other than Jellal. 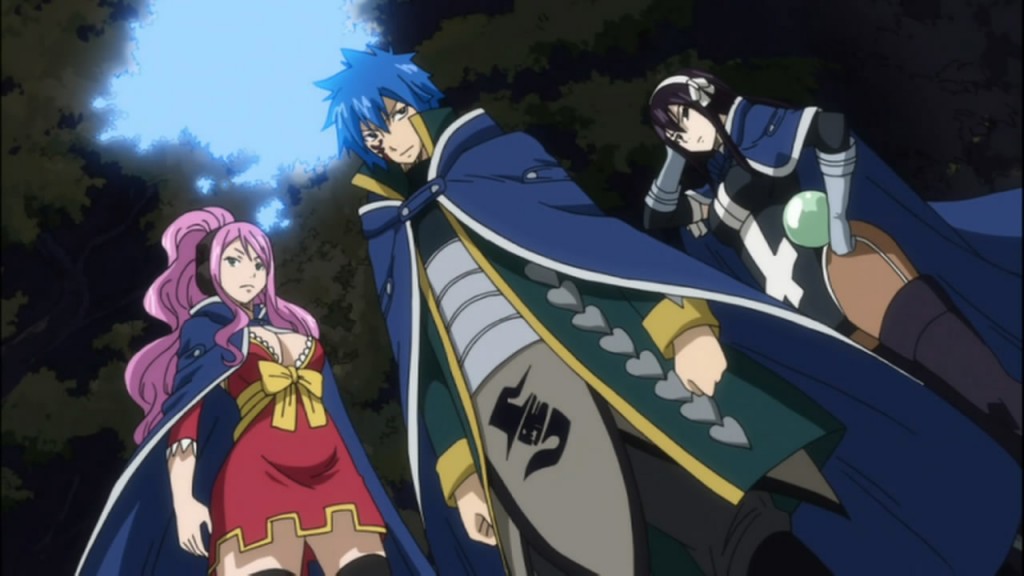 Yes, episode 154 has by far got to be one of my favorite episodes, because it re-introduced one of the most majorly awesome villains turned hero characters ever. Not only was Jellal well and kicking, but the guy has officially become the Batman of Fairy Tail, along with side kicks Meldy and Ultear. I gotta admit, when they were villains, these three were some of the most despicable people I’ve had the pleasure of viewing in Fairy Tail. They were great villains, and its how Fairy Tail handles their uneasy transformation into troubled heroes that really is exciting.

So Jellal not only was broken out of his cell by Meldy and Ultear, but the three of them created an “independent” guild, that works independent of the Guild Alliance to take down all darkness in the world. Now think about this for a second, how cool is that two of the most badass villains in Fairy Tail, Jellal and Zeref, are heading for a direct collision course. I’m definitely rooting for Jellal, as he is one of the most redeemable characters I’ve seen. The guy has done terrible things, without much of a good reason. He’s been a sociopath of epic levels, but damn… that guy, he’s just so earnest and broody (in a good way), its hard not to like him.

Speaking of like, If there was ever any doubt about Erza x Jellal, this episode put all of it to rest: 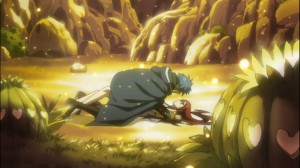 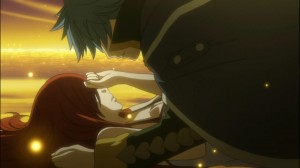 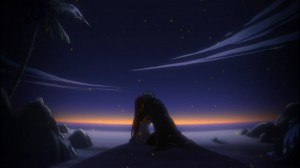 Ahem… I don’t usually regress into net speak and emoticons, but damn, that scene called for it. I was all ready for it too, and damn, the romantic in me was so happy. Then Jellal dropped the bomb then he had a fiance’. I literally screamed: “What the #$#$#$#?!??!?!!” out aloud when I heard that. 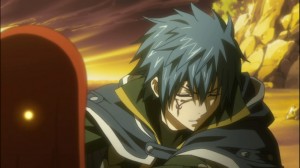 See unlike Erza, I totally fell for Jellal’s lie. I was kinda shocked, but I was really happy to find out that Jellal lied through his teeth. What was even better was that Erza saw right through it. Its kind of tragic that Jellal’s new creed forbids him from “loving someone walking in the light”, because honestly, I want nothing more than for those two to find some happiness. I’m not giving up on Erza x Jellal, anytime soon, even if both of them are okay with it. I’m betting that they’ll get a happy ending whenever the series ends. 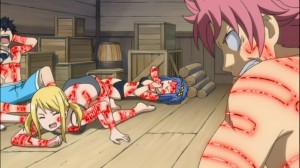 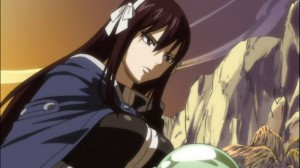 Also, thanks to Ultear, everyone leveled up via her Time Ark magic. Now they have a “Second gear” or whatever, which is basically saying that they’ve unlocked some latent potential that all Mages seem to have. Alright, I’ll go with that. I’m not a huge fan of the whole “cheap shortcuts” to level up for protagonists, but I’m willing to forgive it in this case. This actually puts Natsu and the rest at a decent disadvantage, since honestly, all they’ve increased is their amount of magic power, and not much else.

Now… episode 155 really moved us into the actual Magic Games competition. I’ve got to say, I found the team of Natsu, Erza, Gray and Lucy + Wendy kind of puzzling. If Fairy Tail was serious about winning, they’d need to gather all their big guns in one spot to win. Of course, Erza brought up the interesting point of having a team that works well together being selected.Of course, as we find out in episode 157, Laxus and the rest have a second power team in the ready.

Clever bastard Makarov, you’ve got two teams, with one that works really well together to beat the odds, and another that’s just a frikkin powerhouse. But more on the guilds later.

Episode 155 was the whole “coming to the Capital city of Fiora” episode, and the last real “calm before the storm”. We got a nice montage of Erza chilling in her hotel room for one: 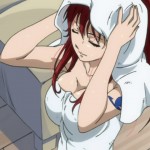 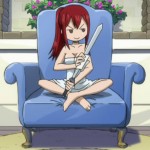 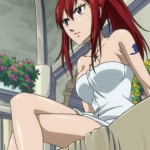 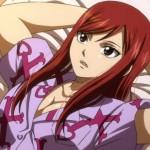 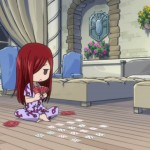 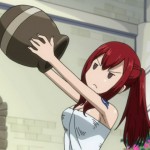 But more importantly, we got Natsu’s meeting with the two Dragon Slayers from Saber Tooth, as well as some explanation of who or what they are. So these two actually fucking killed their dragon parents? I’m sure there’s more to it than that. Either that, or Acnologia is the friggin king of Dragons. There’s no way Anyone ONE person could take on a dragon and kill them. 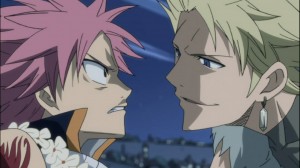 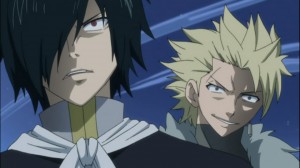 Either that, or the Dragons willingly died by their children to pass on  their powers and make them stronger? I’m not sure exactly, but I’m still doubtful about two teenagers having the power to kill off Acnologia. Granted, they’ve got both the Dragon upbringing, and the Lacrimas in them.

Beyond that, Wendy was ambushed in the palace grounds, and so Elfman has to take over and participate in the Magic Games “elimination round”. I gotta say, throughout the elimination, Elfman was pretty damn badass. 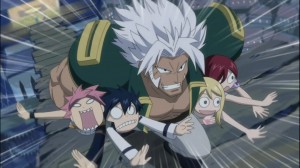 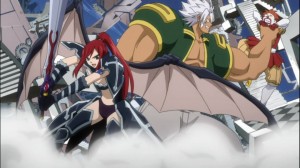 I’ve honestly thought of Elfman as a kind of annoying muscled idiot who keeps shouting “Otoko!” (Man). Whatever that guy did in those three months, he’s really stepped up his game, and its no understatement to say that he’s the reason the team made it through. First, the guy carries ALL of them, and runs towards the maze. Then, he repeatedly keeps his cool, and saves both Natsu and Lucy’s hides from falling. I’m sorry Wendy, but Elfman subbing for you was actual a good thing. 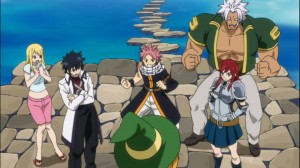 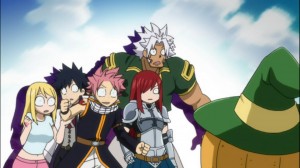 Besides badass Elfman, Erza, Natsu and the rest make it through the first elimination round with…. eighth place XD. Its kind of refreshing to see Natsu and the rest actually be the weakest team, the underdog. They’ve always been pretty darn strong and overpowered. Its really nice to see them struggle and have some really powerful opponents.

And speaking of opponents, the bulk of episode 157 focused on showing off the teams that would be participating, and boy were there some interesting results: 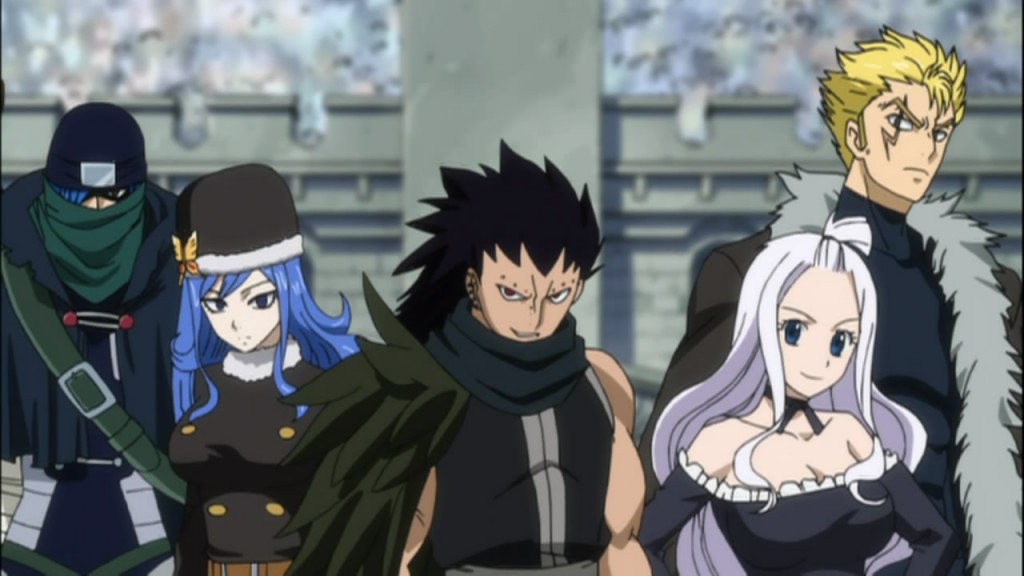 I gotta say, once again, the Fairy Tail Team B gives me the chills. Not only do they SEEM like a power house, but they even got results! Achieving second place amongst all those guilds is no small feat. Looking at the team, I can’t just help but say… WOW. They have two of Fairy Tail’s S-Class Mages, Laxus and Mirajane. They have a former 10th Saint and overall badass Jellal (posing as Mystogan) and on top of that they have Gajeel and Juvia as well. Just wow… When the potential weakest member by comparison on your team is Juvia, then you know you’ve got a super awesome team on your hands. 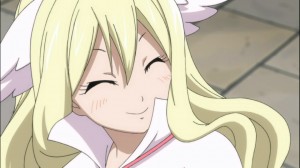 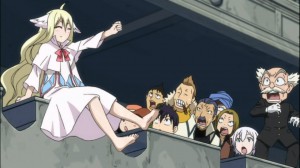 Also, its worth commenting on Mavis’s sudden appearance. So she can pretty much go wherever she wants? That’s kind of a sweet deal. I also found it extremely hilarious that she was okay with Jellal joining in their Guild’s name so they could win the Magic Games. I would also be totally cool with Jellal being a permanent member of Fairy Tail. But yes, its awesome to see Mavis actually back and a part of the series. 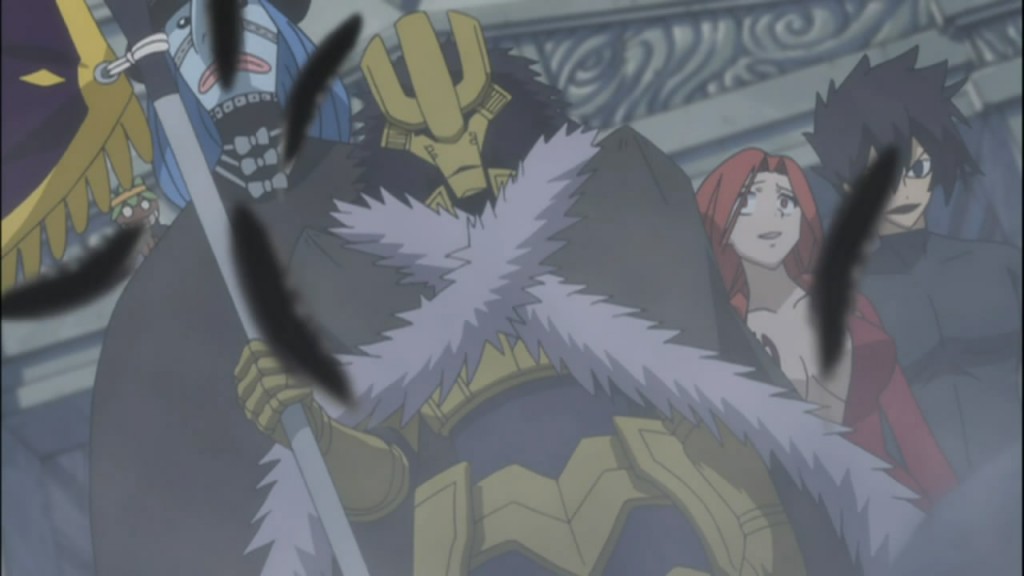 More interestingly, though, is the Raven Tail team. Master Makarov’s son, Laxus’s dad takes center stage in this arc it seems. Master Ivan has, in the past seven years not only probably increased his strength, but also managed to change his Dark Guild into in an official one. In these magic games, Ivan can destroy Fairy Tail through official channels. And to start off, Raven Tail has already taken out Fairy Tail’s best healer, Wendy. Things are pretty serious here.

Speaking of serious, I’ll bet money that the guy in the armor is actually Purehito. Just something about the voice and the fact that he recognizes Laxus and Gajeel XD

We also had Lamia Scale and Blue Pegasus as well, nothing new there. 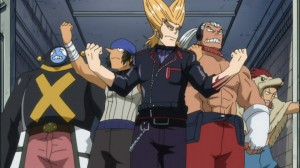 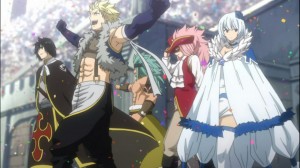 We have the newcomer guilds, some stupid “Wild Four” screaming biker punk wannabes, an all female guild, and of course Sabertooth. Honestly, I’m not too excited about anyone in Sabertooth beyond our two twin Dragon Slayers.

Either way, with episode 157, the first round of combatants are chosen. We have Gray vs Juvia vs Lyon, which should make for an interesting battle. I’m interested to see what the hidden rules are, but we won’t find out about that until next week.

To close, I’d like to say that it feels great to be back and covering Fairy Tail again. 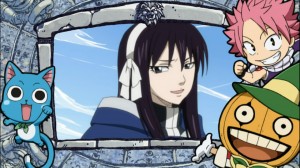 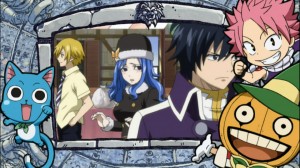 Next week we have Gray’s battle takes center stage. Given that it is now only a day away, well… I’ll see you tomorrow with a new episode post. Until then!