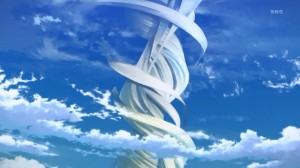 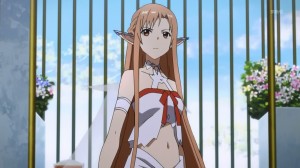 Now, that’s what I’m talking about. One heck of a fight in this episode. Sword Art Online really picking up steam now. The action in this episode was top notch and some good laughs as well watching the two leaders hit on Kirito.

Another positive out of this episode is that Asuna is making her move. I don’t have high hopes that she will get very far considering Sugou has GM powers. If he finds her out there he can just instantly paralyze her and throw her back into the cage. But frankly it’s nice to see her doing more than sitting around and being traumatized. Definitely has a suspenseful feel to it since she can’t afford to be found, but the moment Sugou finds her missing he’ll start hunting her down. Be nice if she could get down the tree, but frankly she probably can’t even fly being stuck in that cage the whole time. 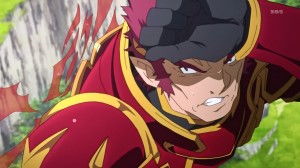 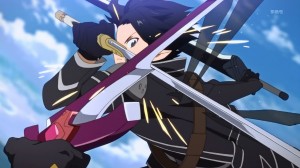 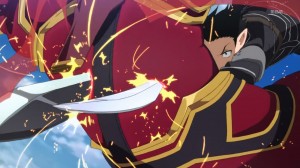 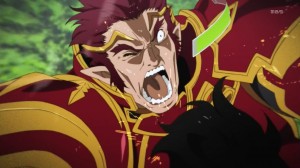 Right to the point, the fight was a treat to watch. I suppose a benefit of ALO is that you can throw in weapons with magical properties and we saw one here. Definitely gives you a pretty powerful advantage when in a duel situation. Even if you realize what kind of weapon it is, it leaves you having to run around and dodge a lot. Plus with someone that strong, that weapon is probably going to one shot the average opponent. Probably a good reason why the game requires you to have a crazy high two-handed weapons stat. Still, can see the series trying to find ways to even out the advantage Kirito has by being so crazy powerful. This guy had a weapons stat that more or less made him able to go head to head against Kirito.

The fight itself was pretty entertaining. Actually made sense for Kirito to just go ahead and grab the sword from Leafa. He may not have dual wield officially, but really it’s not like they are actually using sword skills. The abilities in this game translate more from actual skill. Though since he has had the system assist for so long his body has gotten used to dual wielding. Regardless it gave him an edge that he could use and he certainly used it well here. The surprise factor was probably the biggest thing. Eugene probably hasn’t run into anyone who would actually dual wield and thus having his special attack stopped really threw him off. Kirito has a ton of power, so frankly the opening Eugene gave up when surprised was enough for Kirito to just unleash a hellish amount of damage. It was a pretty intense bout with both sides really going at each other until it was over.

Kirito just continuing to prove that Spriggan magic has its usage. It’s a handy support for the sword skills. All he needed was an opening and to ‘borrow’ Leafa’s sword. Kind of funny watching her reaction to her blade being gone. 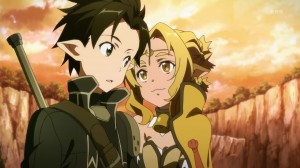 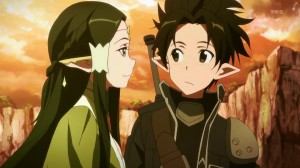 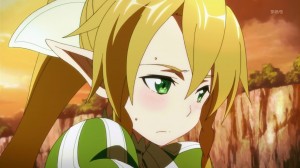 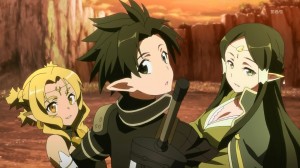 Really some nice reactions overall from Leafa here. Certainly getting attached to Kirito, though ran into some competition in this one. Those leaders really were all over him. I suppose it makes sense since if that rumor of converting races is true then they could lure in a super powerful ally. I really don’t think either could complain about the methods the other were using since they were hardly being subtle about it. But I suppose they want to keep throwing in some solid fanservice when at all possible. Either way the two leaders had their own charms, though obviously Kirito is already spoken for so he won’t be seduced….too easily.

With Leafa she had to stand around a lot and just be the person who believed in Kirito. Did give some entertaining expressions like when Kirito bluffed about there being a Spriggan/Undine alliance. Though I do wonder if there was more to it since she did react pretty powerfully there XD. Unfortunately for Leafa she has enough feelings to step up when those leaders were hitting on Kirito, but not certain enough to actually finish what she was saying. Though in the end she doesn’t even need to be jealous since she has as little hope as those other two. The least the guy could do was actually say he was seeing someone and avoid causing any troubles down the road. 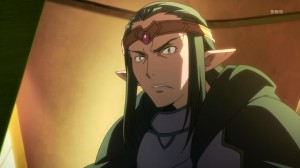 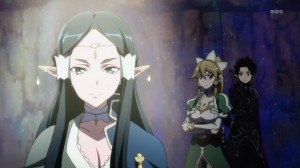 So, at least this trip had a good result. Kirito managing to make a couple strong allies and hopefully that will play a big role. They have to hurry up and prepare to hit the tree since Kirito is actually on a tight schedule. I just wonder if he’s going to actually go ahead and rope in the other races before trying this out. At the very least while Kirito has managed to get by with just him and Leafa that can’t last. They won’t be able to get up that tree without a larger force that can make a difference. Will just have to hope that everyone gathers all the weapons they need in time before going for it.

A good laugh for how things turn out for Sigurd. Jerk tries to play traitor and gets burned badly by it. Let’s see how he likes having to survive out on his own. I’m sure he’ll still cause trouble before this is over, but it was so worth seeing him freak out before getting banished. Always that nice sense of satisfaction in seeing a jerk get what is coming to him. So hopefully first Sigurd, and then it will be Sugou. 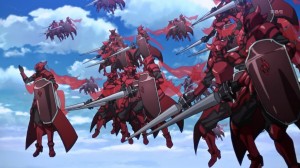 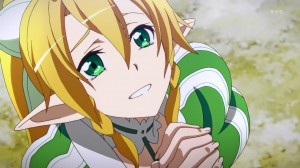 So yeah, I’d say this was a pretty good episode. I really enjoyed the battle and I’m sure we’ll only get bigger ones as we get to the last episodes. I’m still not sure how they take on that kind of GM, but will have to wait and see.
Score: A+