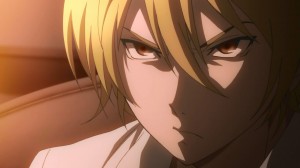 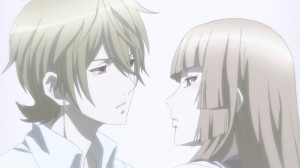 Well I suppose after the revelation as to Aika’s background last episode it was necessary to dive into the relationship between this trio. A pretty mixed up situation with the three of them, but especially for those two guys. Both drawn towards this girl and it’s not an easy thing for either to have been dealing with.

You can just read how confused and frustrated Mahiro is. He certainly doesn’t get why he’s drawn to Aika like that. Of course with things like that it isn’t always easy to apply logic. Maybe love itself is an irrational thing and thus no real good answer to it. She was the opposite of the types he would date in the past, but maybe a good reason for it. He only dealt with girls that would approach him drawn in my those things about him that did make people interested. Unlike others he was left uncertain when around her and afraid to actually touch her. In the end it was an attraction that he couldn’t rationalize and thus bothered him on a certain level. He couldn’t force a relationship into existence, but he still didn’t want her to get involved with others either. Who knows how things would have gone if she had stayed alive. 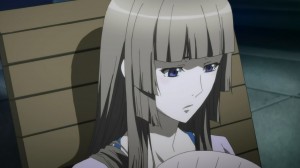 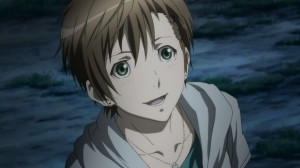 Did get an interesting look at Yoshino from multiple angles. From his own perspective the guy thought that Aika and Mahiro could have fit under difference circumstances and didn’t hate each other. The girl was going out with him, but he still looked at this situation from that angle. Even at this time actually admitting how he felt about Aika to Mahiro wasn’t something he could do.

Did get to see how Aika viewed Yoshino’s personality. A person who can adapt to situations, but at the same time lacks his own forceful personality. Won’t act to change the status quo or take initiative when it comes to the things he personally wants. Thus you could see the view in how he could calmly and rationally shoot if needed. He can adapt to crazy situations like this, but all he is doing is adapting to the world and not influencing it. 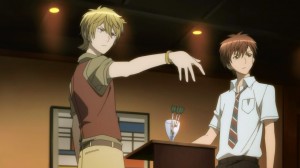 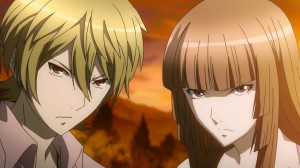 A pretty hilarious point made by Aika in how Mahiro’s type of personality is best suited for Yoshino. All more hilarious when you see those two getting so heated in that darts duel that they completely ignored the girls they were there with. Obviously it’s not a romance between the guys, but reflects how they can be friends. Their personalities just work and together they can certainly accomplish more than either could alone. But really it does make sense why Aika can go out with someone like Yoshino. She has a personality close enough to Mahiro’s that can take the lead in the relationship.

Thus you have the strange relationship between that trio. Frankly like Mahiro I’m left not really understanding what Aika is thinking a lot of the time. She’s had so much screen time through these flashbacks and yet it is still tough for me to get a great read on her. What was she thinking about when she told Mahiro to take care of Yoshino and that no matter what Yoshino would be Mahiro’s ally. Did this girl have any idea about what was waiting for her down the road? The more we see of her the less I can think of her as simply a normal girl that was killed mysteriously. With her being adopted I keep thinking of the possible connection to the Kusaribe clan. There has to be some kind of connection that explains why she got involved. 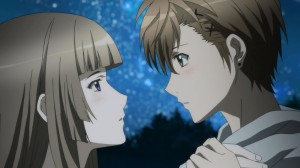 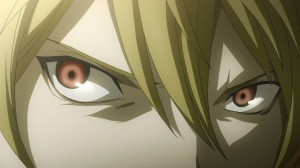 I’m still uncertain about a lot of things going into this battle against Samon. How much does Mahiro know or suspect between Yoshino and Aika? But even more important what kind of revelations await us just around the corner? Should be pretty entertaining.
Score: A