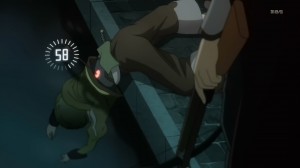 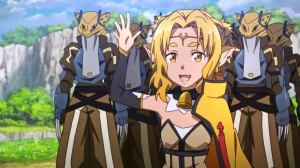 Now this episode really brought the action and gave me real hope for how epic the rest of this series should be. I mean wow, Kirito was just laying into those guys and that was even before they had him use that illusion magic to turn into a monster. Things are only getting more intense with that huge Salamander army about to descend upon the Slyph and Cait Sith peace signing.

I’ll start off giving Recon some credit for his work. I’d still shake my head if they tried to throw him together with Suguha at the end, but he is a good guy. He gave them some critical information even though he screwed up and got himself captured. At least all the pieces are coming together in terms of why Leafa and Kirito were attacked. Still, when Suguha opened up her phone I really thought that either Recon was super concerned….or Suguha might have a stalker XD. I mean geeze dude, assume she’s still in the game and take a breath. Unless the plan was to annoy everyone else in the house with her phone constantly ringing so someone would take the head-gear off. 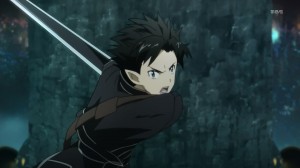 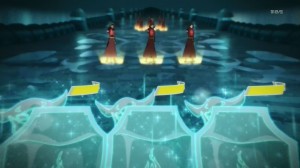 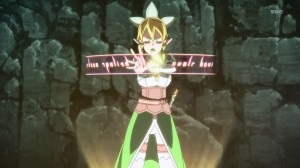 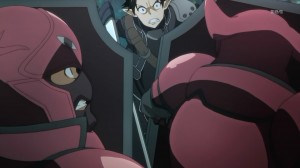 Well we got another helping of berserk Kirito. It really isn’t the first time we’ve seen him just throw himself into a fight in pure rage. Think it really goes way back to the Black Cats and Sachi. When he just threw himself into that boss battle for the revival item with a good chance that he wouldn’t survive. There’s no way that you could go through all he has over those two years and not have some issues left over. Still, it was helpful in this case because he has the mindset of someone who has had to survive these sorts of battles without the option of just dying and coming back. Those Salamander guys don’t have that kind of thought process and so someone coming at them that intensely shook them up. Had to smile when that complete roar of anger made those guys pretty nervous.

With Kirito it’s about the memories he carries. Even if he rationally knows they can afford to die, he won’t let those he parties with die if he can help it. Too many traumas built up to just say it’s alright for them to take a loss this time. It’s probably not a bad thing either, since in any world it’s good to treasure your life. 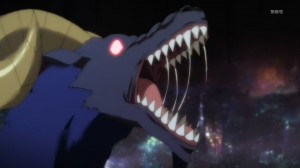 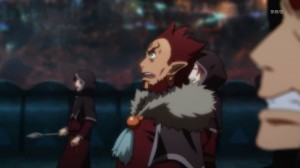 Now I have to say full respect to illusion magic now. I can see Leafa’s point that it doesn’t affect your stats so it’s not always that useful. However, it is all about mindset and personality. An enraged Kirito is scary, and enraged Kirito turned into a monster is terrifying. Some real similarities to the Gleam Eyes he fought in episode 9. That guy was scary enough that when they first saw him Kirito and Asuna ran screaming XD. So, that’s certainly not a bad look to go for when you want to force a party to break formation. But wow, it was just crazy watching Kirito go all nuts on those Salamanders. He was just going all out with the stabbing and chomping down on a couple. It was probably all the more effective because this isn’t SAO. These guys don’t have the experience having boss monsters coming down on them. There are monsters, but it’s more normal kinds rather than bosses.

I thought even before the illusion that Kirito was getting the taste of being a boss monster in that fight. Instead of facing against hordes of monsters that don’t really cooperate too much, he was facing a pretty standard party type. The tanks took the heat at the front allowing the mages in the back to keep them healed. Then the mages could just fire as they wished and whittle down Kirito’s health. Leafa was doing a good job, but she can’t compensate for that much damage. Kirito isn’t a tank after all so he has to do the damage before he gets taken out. Then of course they literally made Kirito a boss monster which was hilarious from my point of view XD. 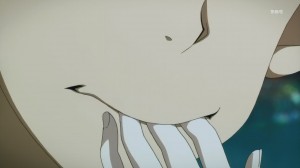 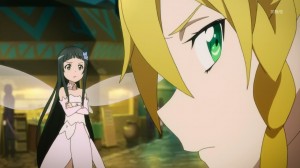 Still there were some laughs to be had in this episode. I mean Kirito taking Leafa’s fingers into his mouth was just hilarious. No shock that she responded with a pretty strong slap. While he might have intended it as a joke neither Leafa nor Yui were laughing XD. On that note those two really are getting along better. Suppose it makes sense since at this rate, Suguha will end up as Yui’s Aunt. Good to build up the family bonds I suppose.

It was also funny watching Kirito make that deal. Went from rage mode to gamer mode in a pretty short amount of time. After playing through SAO he knows how to make necessary deals and frankly he’s gamed long enough to know that alliances mean less in the face of cash and items. 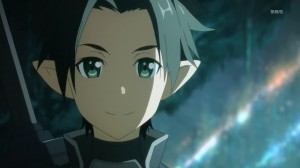 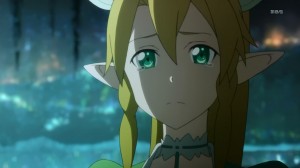 The episode ended with a good scene though. Leafa could certainly understand Kirito not sticking with her considering how things looked. If his goal is to climb that tree then working with a group that is about to take a huge leap forward makes sense. The fact that he’s kicked their rears might not even matter since it just proves how powerful he is. He probably would be able to make a deal with the Salamanders if he wanted to.

But that’s not what Kirito is here for. He came all this way to save Asuna. The reason he is fighting is for something bigger than the game and living through SAO has taught him how being in a virtual world doesn’t change some things. You are still you, no matter where you are or what you are doing. Those experiences in the virtual world change the person who experiences through them. No matter which world they are in, those players are living in every moment. He can’t just turn on Leafa, because that would turn him into something he wouldn’t want to be. Besides at this point they are friends and he won’t turn on a friend just because it might make things easier. He’s going to pull this off with Leafa and if that means he has to charge in to help stop this Salamander assault then that’s what he is going to do. 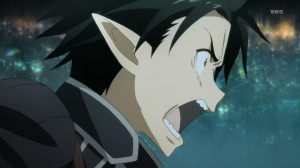 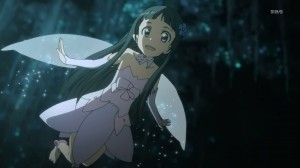 So yeah, I can say this was one heck of a good episode. The action was great, but also liked this connection between Kirito and Leafa. We all know he’s getting together with Asuna in the end, but hopefully when everything comes out into the open it only improves the relationship between Suguha and her brother. Let’s see what will happen next week.
Score: A+