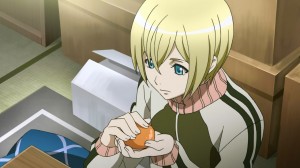 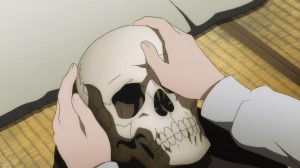 Well damn, that was a slight surprise. Too bad they dropped the Hakaze skeleton issue for now, but certainly followed up with some interesting developments. I do think Yoshino being so pragmatic will cost them eventually. Hiding too many secrets that could really drive him and Mahiro apart at the worst possible moment. Of course to be fair if he finds out about Yoshino and Aika nothing else will matter, but I really don’t think flirting with danger with these hidden deals is a good idea.

I have to say that friend of Hakaze’s is a real weirdo. Who identifies a body by holding the skull? If it wasn’t for Samon acting weird I’d think the whole thing was nonsense. That guy may have some weird ability that could lend credence to his identification, but for now I’m less willing to believe Hakaze is actually dead. I mean really, we have someone dead who looked rather similar to Hakaze. If you wanted to fake a body with bones then really Aika would be more than good enough. Not like it’d be that hard to steal a corpse. If they had to fake her actually dead body then it might have been hard, but bones isn’t that big of a deal. Somehow I doubt it’s that simple, but you never know. 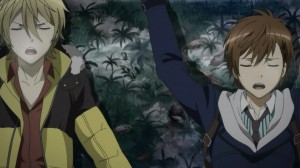 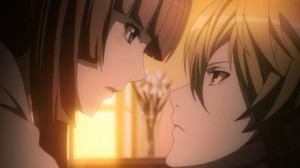 Think this episode just reminds you that Mahiro isn’t so single-minded as he might appear. Revenge is certainly important to him, but it’s not like he can’t see anything else. The second Yoshino was gone he was up and going after him. Frankly, even Yoshino was shocked by what happened there. But frankly I think after losing Aika he was not eager to lose his best friend on top of it all. Really he seemed rather concerned about Yoshino going with him in the first place. He was trying to keep his friend out of this and out of danger. He may be driven by revenge, but he certainly does have other feelings going on.

I am kind of disappointed that they went and made Aika a non-blood sibling for Mahiro. Did they really have to make him be in love with her? I didn’t think it was a super stretch to have him that angry about his sister being murdered. Some people are rather attached to their siblings. They don’t have to be ‘in love’ with them to create a serious emotional response. So instead of just having him be an overprotective brother we are stuck with a love triangle…with a girl who’s dead. I’d just rather not have the reason that he was so protective be because he wanted Aika for himself. Maybe another case of being able to have any girl he wants except for the girl he can’t have. 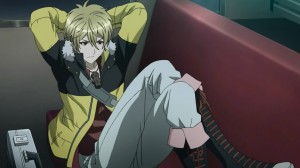 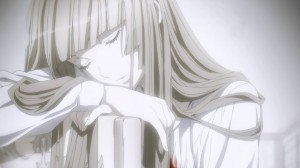 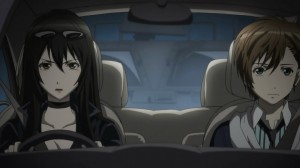 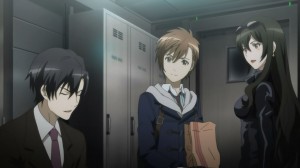 Of course now left wondering about the weird relationship with Yoshino, Aika, and Mahiro. I mean clearly Mahiro was into Aika and both of the other two knew that. Which made it all the more impossible for them to bring up their relationship. Now I’m really eager for more flashbacks though just to find out what was going on with those three. How did Aika really interact with Mahiro? Certainly seems like the type that would simply state her mind and that probably only made him more interested in her.

I really wonder what Yoshino is thinking with this hidden alliance. It hardly seems that useful when you consider the risks to his friendship with Mahiro. I mean really, the army was getting its rear kicked by Mahiro alone. A kid with just talismans could do that much against soldiers, so what can we expect when they clash against full blown mages who are making offerings to the tree of genesis? Sure, their ambush on Yoshino and Mahiro worked alright, but I really have doubts as to what they can do when the time comes. They might be a handy distraction or meat shield I suppose. Yoshino seems to have his own plans in mind though making sure he’s armed with gas and a gun. The wheels are spinning in there. 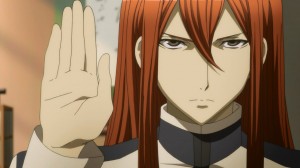 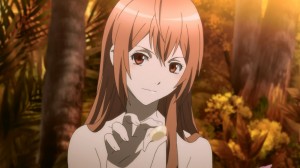 Now I really have to wonder what was meant about Hakaze and the Tree of Genesis being the real threat to the world. I suppose there are reasons to think it as being possible. It’s a tree that takes offerings of civilization and gives power in exchange. Just what will happen when that tree wakes up? Is it just going to consume civilization as a whole and destroy the world? Are Samon and company actually trying to save the world by awakening the one thing that can stand up to the tree of Genesis? It could be a case of trying to accept a short term pain for long term gain. Though that hardly means anything to those people killed by this and turned to metal. It does make you wonder.

Clearly this battle against Samon’s forces will be huge in a variety of ways. I’m just waiting for the bomb to drop when it comes to Aika’s death and her relationship with Yoshino. There are a lot of secrets just kept out of view that could really change the entire perception of the series. It should be fun to see just where all of this goes. The action at the very least should be intense as usual. 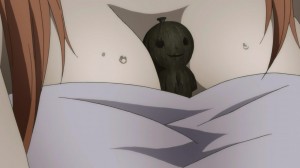 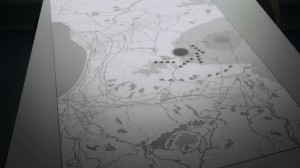 Still wish I knew what was up with that skeleton. There are varying theories and sadly I can’t know for sure which ones are accurate. At this point I wouldn’t be surprised if Hakaze was actually Aika turned into Hakaze by the Tree of Genesis so there was someone to save the day if Samon failed. The theories just spiral out of control with this show.
Score: A-