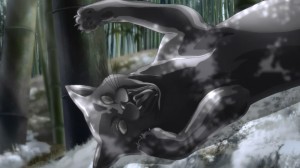 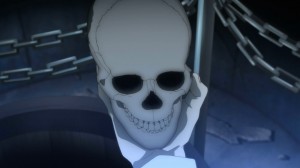 I’ll give the latest episode credit for making me go “wait what!?” I mean damn, I didn’t expect that kind of twist. A lot of things that just only kind of make sense and the more I think about it the more confused I end up making myself. I’m glad that Hakaze and the others are just as confused about this and I can’t wait to see how this will all turn out.

So might as well tackle the question being presented right from the start. Who’s skull is Samon holding there at the end? Is it actually Hakaze? Is it Aika? I mean we clearly see Hakaze who doesn’t seem to be some recording talking and interacting with Mahiro and Yoshino. I mean she looks pretty alive to me. Plus the whole episode seems to hammer on the point that they need her alive and able to step in when necessary. Considering whatever wild theory is needed to help this make sense, Hakaze doesn’t seem stupid enough to jump into a barrel and send herself out to see. I mean the odds of floating out of the barrier and being found or crashing onto shore before she would starve seems rather low. Especially if she knows that Samon needs her alive. 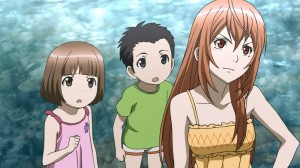 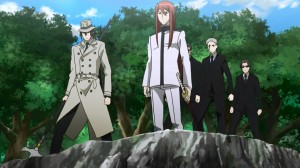 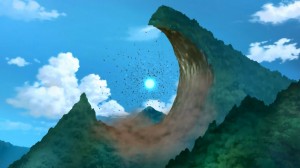 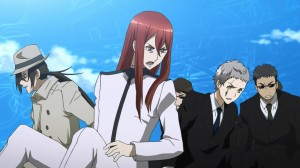 But then, what about the skull? I mean one would assume that Aika is buried where she’s supposed to be. I could see the clan stealing Aika’s body to convince this guy and others that she’s dead…Regardless it seemed clear from the beginning that Aika and Hakaze looking so similar wasn’t a coincidence. Whether it was to help fake her death or for some other purpose. We are talking about magic here. There might be the logic and order of the world stuff to consider, but it’s still magic. This development could mean absolutely anything. All we know is that this guy seemed to confirm Hakaze’s death and Samon is saying that she’s still inside a barrel.

Regardless the flashback in this episode proved just how insanely powerful Hakaze is. The only way to stand against her is to stick her on an island by herself. With even a small talisman she completely outclassed Samon and his goon squad. I mean damn, she pretty much blew up a mountain by creating a “defensive” barrier. Makes sense that she is the only one who can be called in if Samon’s plans go out of control. Kind of funny that the whole plan to save the world is to make things dangerous enough that Samon has to quickly recover Hakaze. 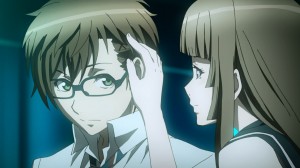 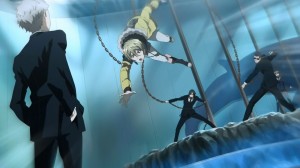 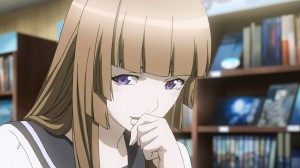 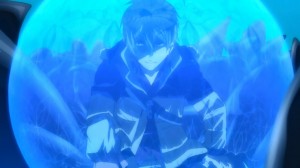 Another nice flashback with Aika showing that relationship. I am sure Aika will be proven right that everything happens for a reason. However, for what reason and to what result I have no idea. It just shows that when the act is up that Aika really was sweet with Yoshino. Of course, she had no problem teasing and giving him a normal little present since it suited him XD. She might not be alive, but she is still one of my favorite characters because she really does just put her opinions out there.

Of course, the gift just ties right into things. What does it mean that the talisman happened to be the same as the gift Aika gave to Yoshino. There’s no way that’s just coincidence. Just what kind of connection between Hakaze and Aika exists here? Two people who looks pretty similar, weird magic, and a death that occurred before Hakaze went missing…I just don’t know.

A nice clash with the magicians this time. Just shows how dangerous Yoshino and Mahiro are when they team up. Alone Mahiro certainly would have gotten caught, but together these guys can really accomplish things. Of course this opponent wasn’t as tough in a fight, he just had goons with him. A good trap and proving that they can win against mages, long as they have a strategy. 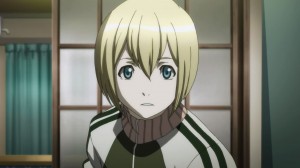 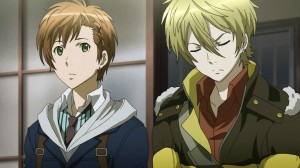 Will say the latest episode just helped add to the mystery and made things a little more interesting. At this point can’t really take much for granted. Looking forward to seeing Mahiro and Yoshino clashing with Samon and getting to the bottom of this situation. Plus want to see what this special talisman of Hakaze’s can do since it’s bound to be something special. But yeah, this episode definitely surprised me.
Score: A-